John Gay, the English poet best remembered as the creator of the immortal fictional characters Captain Macheath and Polly Peachum, was a highly prolific and respected writer in the 18th century London. Though he produced a great many works of literature over his long and productive career, his ballad opera - ‘The Beggar’s Opera’ - is the best known of his works. The satirical play was first produced in London by the theatre manager John Rich and ran for 62 performances—the longest run for a play during those times. The play highlighted the moral degradation of the society in a lighthearted and humorous way, and parodied the King’s government. The fact that an abridged version of the opera is still performed in various theaters is testimony to its popularity. Political forces banned the production of its sequel, ‘Polly’ though there was a high demand for the printed version. As a young man Gay once worked as a secretary to the dramatist Aaron Hill who introduced him to the leading literary figures like Alexander Pope, Jonathan Swift, and John Arbuthnot. Gay began his literary career as a poet; his first published work was the poem ‘Wine’. Even though his first play, ‘The Mohawks’ was never produced his future plays proved to be big success. Peter Morgan
DID WE MISS SOMEONE?
CLICK HERE AND TELL US
WE'LL MAKE SURE
THEY'RE HERE A.S.A.P
Quick Facts

British People
Playwrights
British Men
Male Poets
Cancer Poets
Childhood & Early Life
He was born into an ancient Devonshire family in England as the youngest son of William Gay and his wife. He was orphaned at an early age and was raised by his maternal uncle, the Reverend John Hanmer.
He received his primary education from his town’s free grammar school under Robert Luck who was a minor poet with some published works in English and Latin. 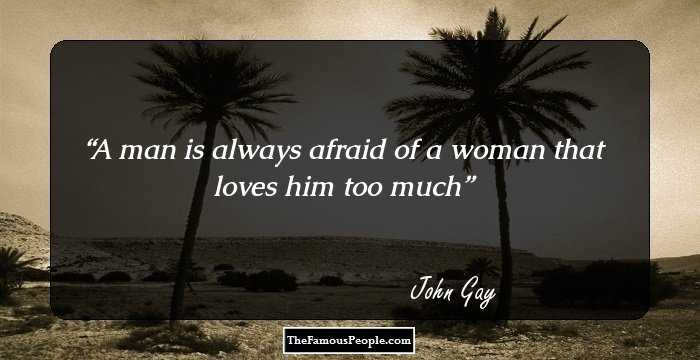 The Sexiest Men Of 2020, Ranked
Career
After school he was apprenticed to a silk mercer in London. However he hated the job and came back home to his uncle in Barnstaple.
He moved to London again in 1707 to work as secretary to the dramatist Aaron Hill. Hill introduced him to London’s literary circles where he met and befriended famous writers like Alexander Pope, Joseph Addison, and William Congreve.
Gay had a deep love for literature and began his career as a poet and ballad-lyric writer. He had a quirky sense of humour and a talent for writing satirical and ironic pieces. His first published poem was a parody, ‘Wine’.
His friends helped him in producing ‘The British Apollo’ a question-and-answer journal. He also contributed to the pamphlet, ‘The Present State of Wit’, a survey of contemporary periodical publications in 1711.
He worked as a steward in the household of the Duchess of Monmouth from 1712 to 1714 which left him with enough time to write. His first play was ‘The Mohawks’ which was never produced. His second play, ‘The Wife of Bath’, was produced at Drury Lane, a prominent theatre, in 1713.
His poem ‘Rural Sports’ first appeared in 1713. It was an evocative work that described in detail the countryside and dealt with hunting and fishing. This poem was dedicated to Alexander Pope who was his lifelong supporter and a close friend.
He found his first big success in 1714 with the play, ‘The Shepherd’s Week’, a series of six mock classical poems drawn from rural English life. The purpose of writing this was to ridicule the Arcadian pastorals of Ambrose Philips.
In a probable collaboration with Alexander Pope, he produced ‘What d'ye call it’ in 1715. It was a skit on contemporary tragedy with a special reference to Thomas Otway’s ‘Venice Preserv'd’. The common public was unable to get its real meaning so Lewis Theobald and Benjamin Griffin published a guide, ‘Complete Key to what d'ye call it’ to explain it.
In 1716 his poem ‘Trivia or, The Art of Walking the Streets of London’, was published. This poem was highly appreciated for its vivid descriptions of London and is considered to be his finest poem.
Continue Reading Below
The vulgar comedy ‘Three Hours after Marriage’ was produced in 1717. It is presumed that his friends Alexander Pope and John Arbuthnot assisted him in creating it. The comedy failed as it was deemed as being too indecent.
Over the 1720s he published several works which included ‘Poems on Several Occasions’ (1720) which helped him earn more than � 1000. He wrote ‘Fifty-one Fables in Verse’ for Prince William in 1727.
His most famous work, ‘The Beggar’s Opera’ opened at the Lincoln’s Inn Fields Theatre in January 1728. The ballad opera parodied the King’s government and his Chief Minister, Robert Walpole. He used the symbols of highwaymen and thieves to depict the moral degradation of the society.
The production of the sequel to the ballad, ‘Polly’ was banned by Walpole. This ban, however, proved to be a blessing in disguise as the demand for the printed version of the play ran very high and made Gay a rich man. 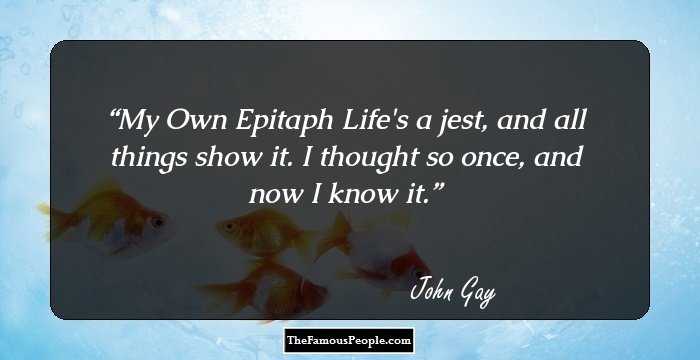 Quotes: I
Major Works
The ballad opera ‘The Beggar’s Opera’ ran for 62 performances at the Inn Fields Theatre—the longest run for any play in theatre history at that time. The play was revived in 1920 and had an astounding run of 1,463 performances at the Lyric Theatre.
Personal Life & Legacy
He never married. He was very close to his friends and patrons Alexander Pope, John Arbuthnot, and William Congreve. These friends always supported him through the highs and lows of life.
He earned good money from his writings during his lifetime. However, he made some misguided investments in South Sea Stock and lost most of his wealth. This shock affected his health and he became ill.
He was given a home during his last years by one of his fans and patron - the Duke of Queensberry. He died in 1732 at the age of 47. 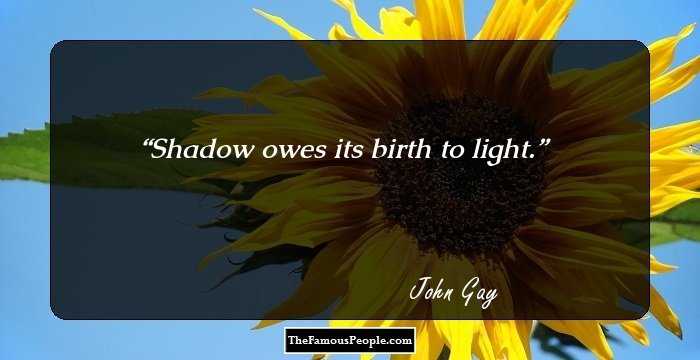 See the events in life of John Gay in Chronological Order