One of the foremost leaders of the African-American community, Booker T. Washington was a great educator and orator who founded the Tuskegee Normal and Industrial Institute in Alabama, now known as the Tuskegee University. Born to a black slave mother and an unknown white father, Washington had a very difficult childhood; as a small boy he was forced to work strenuously and often beaten up. He would observe white children at school and wanted to study but it was illegal for slaves to receive an education. Poverty prevented him from studying even after his family was freed forcing him to seek employment. However, he found a saviour in Viola Ruffner, the woman he worked for, who encouraged him to study. He eventually attended the Hampton Normal Agricultural Institute where the headmaster Samuel Armstrong became his mentor and deeply influenced the young Washington’s philosophy. The former slave became an educator after his graduation and eventually helped found the Tuskegee Normal and Industrial Institute. He became an orator and represented the African-American community in the Atlanta Compromise in 1895 thereby becoming a national figure. His speech on bringing economic and social progress of blacks through education and entrepreneurship made him a widely respected member of the African-American community. Stedman Graham
5th April In History
DID WE MISS SOMEONE?
CLICK HERE AND TELL US
WE'LL MAKE SURE
THEY'RE HERE A.S.A.P
Quick Facts

American Celebrities
African American Authors
Educators
Black Leaders
Black Educators
Childhood & Early Life
Booker Taliaferro was born to a black slave woman, Jane in Virginia. Nothing else is known about his biological father expect for the fact that he was a white man.
He began working as a young child as children of slaves became slaves by default. He wanted to study but it was illegal at that time for slaves to get educated.
His family was freed in 1865 after the end of the Civil War. He was nine years old at that time.
His mother married a man called Washington Ferguson and the boy officially took the surname of his stepfather and became Booker T. Washington.
He could not go to school even after being freed because of poverty. He worked in salt furnaces as a salt packer to help his family.
He found job as a houseboy at the house of coal mine owner Lewis Ruffner in 1866. His wife Viola recognized the boy’s intelligence and encouraged him to study.
In 1872, he joined Hampton Normal Agricultural Institute, an educational establishment for freed blacks. He did odd jobs, including one as a janitor to pay for his tuitions.
The headmaster of the institute, Samuel Armstrong, was an opponent of slavery who believed in emancipation of blacks through education. He spotted the boy’s potential and arranged a scholarship for his education through a wealthy white man.
Armstrong became the boy’s mentor and helped him develop a strong character. He graduated from Hampton Institute in 1875. 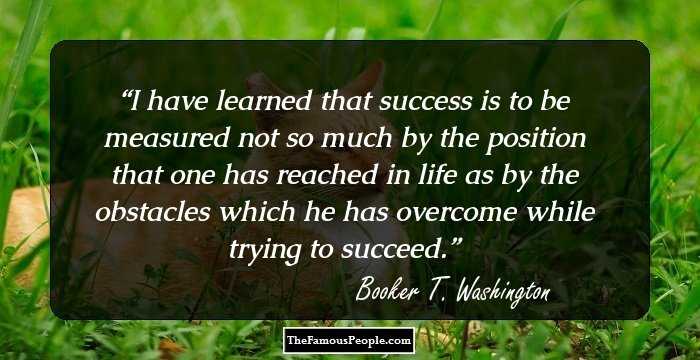 Quotes: Life, Trying, I
Continue Reading Below
Career
He found employment as a school teacher in Malden upon his graduation and attended the Wayland Seminary in Washington, D.C. in 1878.
In 1881, the Alabama legislature approved the building of a new school for the blacks, called the Tuskegee Normal and Industrial Institute. Armstrong recommended Washington to become the head of the school. He held this post for the rest of his life.
Initially classes were held in a shanty old church and Washington personally traveled from place to place promoting the school. The school provided academic as well as practical education in fields like carpentry, farming, printing, etc.
The school prospered under his able leadership and grew to include several well-equipped buildings with more than 1500 students and a faculty of 200 by the time of his death.
He was invited to speak at the Cotton States and International Exposition in Atlanta, known as the ‘Atlanta Compromise’ in 1895. The speech was widely reported by the newspapers and made him an ideal representative of the African-American community.
In 1901, he was invited by the President Theodore Roosevelt to visit the White House. Roosevelt as well as his successor President William Howard Taft consulted Washington on racial matters.
His autobiography, ‘Up from Slavery’ was published in 1901. The book gave an account of how he rose from the position of a slave child to become an educator.
Even though he had worked hard for the upliftment of blacks, he was criticized by several black activists on the ground that Washington believed in subservience of blacks to the whites; William Du Bois was his biggest critic. 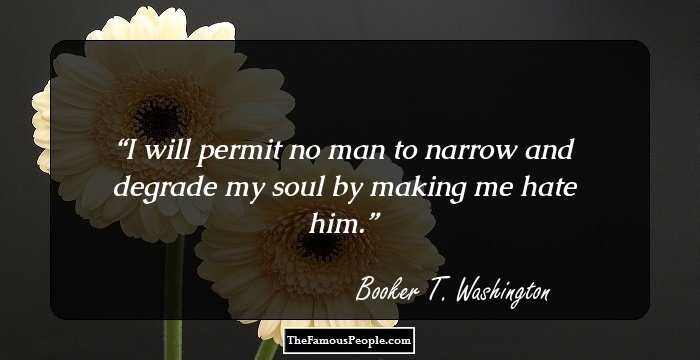 Quotes: Me, Will, Soul, I
Continue Reading Below
Major Works
The Tuskegee University which he had established in an old dilapidated church building in 1881 today provides education to 3000 students from not just the U.S. but also several other countries. The campus of the university is designated as the Tuskegee Institute National Historic Site.
His autobiography ‘Up from Slavery’ gave a detailed account of the problems faced by blacks during that era and how he overcame the obstacles to succeed in his life. The book became a bestseller and is listed among the Modern Library’s list of the 100 best nonfiction books of the 20th century.
Awards & Achievements
He was awarded an honorary master’s degree from Harvard University in 1896 and an honorary doctorate from Dartmouth College in 1901 for his contributions to American society. 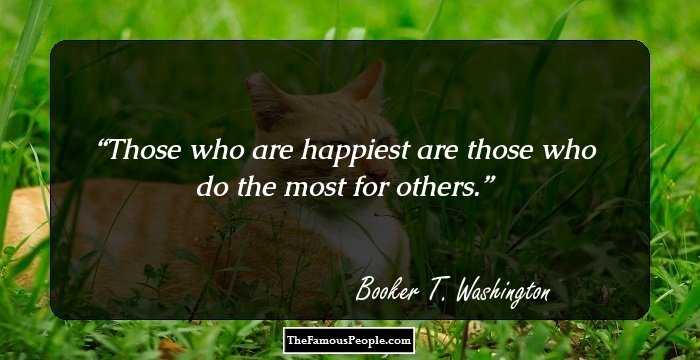 Personal Life & Legacy
He married Fannie Smith in 1882 and had one child with her. Fannie died in 1884.
His second wife was Olivia Davidson whom he wed in 1885. She gave birth to two sons before dying in 1889.
He married again in 1893. His third wife Margaret Murray helped rear the children from his previous marriages.
He died of congestive heart failure in 1915.
Trivia
He was the first African-American to be depicted on a U.S. postal stamp.
The house where he was born was designated as the Booker T. Washington National Monument on his hundredth birth anniversary.

See the events in life of Booker T. Washington in Chronological Order