Angela Carter was a legendary English fiction writer and journalist. She figured in ‘The Times’ list of ‘The 50 Greatest British Writers Since 1945’. Her writings personified a pledge to feminism and also included nuances of magical realism. As a young girl, she was inspired to take up journalism, following the footsteps of her father and was soon appointed with ‘The Croydon Advertisement’. After a brief stint as a journalist, she began to write short-stories and novels, some of the celebrated ones being, ‘The Infernal Desire Machines of Doctor Hoffman’, ‘Fireworks: Nine Profane Pieces’ and ‘Nothing Sacred’. To inspire herself, she travelled all around the globe, soaking in all the different cultural diversities and experiences, which she took back with her for her writing endeavor. Soon, her works began to echo a sense of feminism. She took her first step as a deep-seated suffragette by espousing the works of Marquis de Sade, offering generally positive reviews about her work. Most often, she explored the ideas of female empathies in the milieu of the horrifying contrivances of male whims. This was fully reconnoitered in one of her literary masterpieces, ‘The Bloody Chamber’. Carter is remembered as a person who was outspoken in her views, but warm and reserved at the same time. British Celebrities
Poets
Novelists
Short Story Writers
British Women
Childhood & Early Life
Angela Carter, born as Angela Olive Stalker, was born in Eastbourne, England. Her father was a journalist and became the main source of inspiration for young Carter to pursue journalism later in her life.
At the break of World War II, she was sent to live with her maternal grandmother in Yorkshire.
Throughout her teenage years, she suffered from extreme eating disorder, anorexia nervosa, for which she was heckled at on many occasions.
She majored in English literature from the University of Bristol. However, during her expeditions and travels, she became fluent in other languages as well such as French and German.
Her first employment was with ‘Croydon Advertiser’, where she was hired as a journalist. The work offered Carter some of her first connections with script at a professional level. 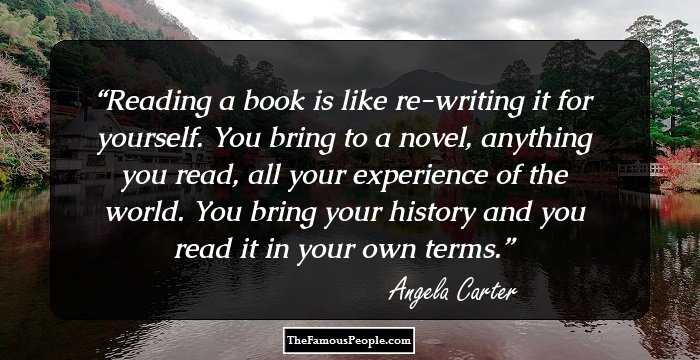 Famous Beautiful Women With Green Eyes
Career
She published her first novel, ‘Shadow Dance’, in 1966 and a year later, she won a prestigious award for her second novel, ‘The Magical Toyshop’, which was adapted for a film later on.
After printing her third and fourth novels, ‘Several Perceptions’ and ‘Heroes and Villains’, she relocated to Japan, where she worked as a journalist for three years.
During her time in Japan, she authored ‘Love’, in 1971 and ‘The Infernal Desire Machines of Doctor Hoffman’, in 1972. Her time in Japan was one that was dotted with self-discovery and her experience of gender relations in Japan forced her to become radicalized.
In 1974, she published a collection of popular short-stories in a publication titled, ‘Fireworks: Nine Profane Pieces’. Around this time, she also contributed regularly to ‘New Society’, a political magazine.
In 1978, Angela Carter wrote a controversial essay 'The Sadeian Woman and the Ideology of Pornography'. In the essay she offered a a generally positive interpretation of the works of the Marquis de Sade. She rgued that the Marquis de Sade was one of the first writers who viewed the function of women as something that transcended the function of producing babies.
In 1979, she came up with her most renowned work 'The Bloody Chamber', which was a collection of short stories. The book received much critical acclaim.
While writing these books, she also held a number of important academic offices at institutes like Brown University, University of Adelaide, University of East Anglia and University of Sheffield.
She also contributed a string of articles to important publications like ‘The Independent’, ‘New Statesman’ and ‘The Guardian’.
In 1984, she published three important works which include, ‘Black Venus’, ‘Come unto These Yellow Sands: Four Radio Plays’ and ‘Nights at the Circus’. The same year, she helped in the production of the movie ‘The Company of Wolves’, which is based on the novel of the same name written by Carter.
Continue Reading Below
In 1987, she was involved in aiding the production of the film adaptation of her popular novel, ‘The Magic Toyshop’.
In 1990, she published ‘The Virago Book of Fairy Tales’. Her last work, titled, ‘Wise Children’, was published the next year. She began working on ‘The Curious Room’, a collection of several plays and scripts by her. However, the book was published four years after her death. 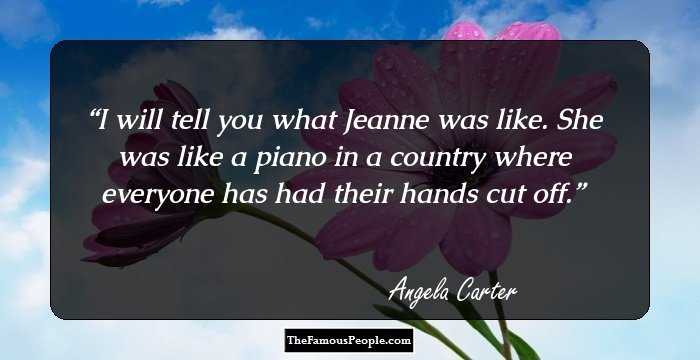 Quotes: You, Like, Will, I
Major Works
In 1979, she penned ‘The Bloody Chamber’, a short-fiction book. It became one of her most significant works, winning the Cheltenham Festival Literary Prize, the same year of its publication. The novel earned heavy acclaim from numerous critics and readers. Some of the stories in the book were later adapted for radio and film such as ‘The Company of Wolves’. ‘The Bloody Chamber’ also became the subject for a popular theatrical adaptation.
‘Nights at the Circus’, published in 1984 was honored with the ‘James Tait Black Memorial Prize’ for the category of fiction. The book is regarded as one of her best-known works because it integrates facets of postfeminism, postmodernism and magical realism. The popularity of the novel spawned a stage adaptation by Tom Morris and Emma Rice, in 2006.
Awards & Achievements
She won the Somerset Maugham Award for ‘Several Perceptions’, in 1969.
Angela Carter was ranked #10 in ‘The Times’ list of ‘The 50 greatest British writers since 1945’. 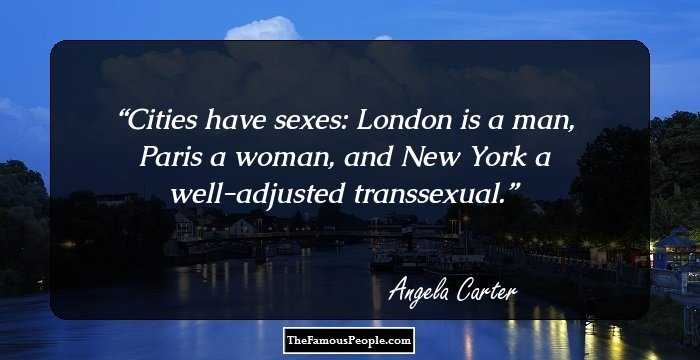 Personal Life & Legacy
In 1960, she married Paul Carter. They separated a decade later.
In 1977, she married Mark Pearce and the couple had a son.
She passed away due to lung cancer in London, England.
Trivia
This prolific British writer began writing a sketch for the sequel of Charlotte Bronte’s ‘Jane Eyre’, based on the life of Jane’s granddaughter. However, due to her untimely death, the project was unfinished and only a precis of the same survives today.
Recommended Lists:
Writers #1281
You May Like

Quotes By Angela Carter | Quote Of The Day | Top 100 Quotes

See the events in life of Angela Carter in Chronological Order