Benjamin Harrison was the 23rd president of United States and the grandson of William Henry Harrison, 9th president of United States. After completing his education, he started law practice and became an active member of the Republican Party. He joined the military to fight in the Civil War, marched on Atlanta with General Sherman and was promoted to Brigadier General. After the war, he left the military service and resumed his law practice. Later he was elected as a U.S. Senator, a post which he held for six years. In the 1888 elections, he was nominated as the presidential candidate by the Republican Party. It was a close campaign in which his opponent won the popular vote but failed to carry his home state of New York and lost in the Electoral College to him. He became the president when the reforms were beginning to become popular and one of the most significant reforms, which was passed during his time in office was the Sherman Anti-Trust Act. The Act which prohibited certain anti-competitive business practices was an important first step towards reining monopolies. He is remembered as a man of strong principles who possessed a keen intellect and a phenomenal memory. He was known before, during, and after his years of public service as a man of moral courage. American Celebrities
Political Leaders
American Men
Miami University
Leo Leaders
Childhood & Early Life
He was born on August 20, 1833 in North Bend, Ohio, United States, to John Scott Harrison, a member of the U.S. House, and his wife, Elizabeth Ramsey Irwin Harrison. He was the second of eight children in his family.
He received his early education in a one-room schoolhouse near his home and in 1847, attended the Farmer's College near Cincinnati, Ohio. In 1850, he was transferred to Miami University in Oxford, Ohio and graduated in 1852.
After completing college, he studied law as a legal apprentice in the Cincinnati law office of Storer & Gwynne and later moved to Indianapolis, where he began practicing law and became a crier for the Federal Court in Indianapolis. 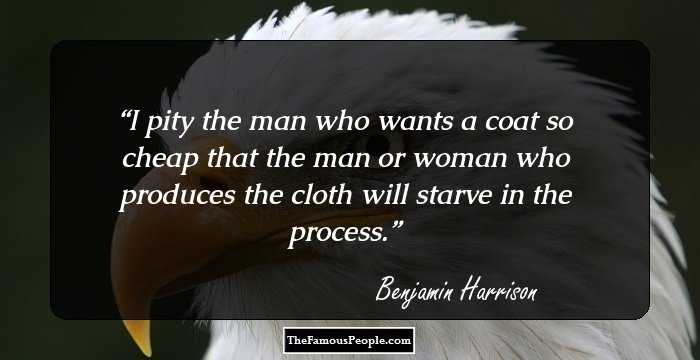 Quotes: Will, I
Continue Reading Below
Career
In addition to law practice, he joined the new Republican Party and campaigned in 1856 for its first presidential nominee, John C. Fremont. In 1857, he entered politics himself and was elected as the Indianapolis City Attorney.
Later he served as secretary of the Republican State Central Committee and campaigned for the 1860 presidential candidate, Abraham Lincoln. He was also the state reporter for the Supreme Court of Indiana, summarizing and supervising the publication of the court's official opinions.
In 1862, during the American Civil War, he joined the Union Army as an officer, participating in William Tecumseh Sherman's ‘Atlanta Campaign’. By the end of the war, he had been promoted to the rank of brigadier general.
After the war, he resumed his law practice and worked as a court reporter. He continued his active participation in state politics, running unsuccessfully for the Republican nomination for governor of Indiana in 1872. In 1876, he won the Republican nomination only to lose the governor's race in a close election.
By 1880, he was deeply involved in national politics, leading the Indiana delegation to the Republican National Convention. From 1881 to 1887, he served as a U.S. senator from Indiana. In 1887, the Indiana state legislature came under Democratic control, and he declined to return to the Senate.
In the 1888 Presidential elections, he was nominated as the presidential candidate on the eighth ballot to run against the incumbent President Grover Cleveland. When the results were declared, he lost the popular vote but won in the Electoral College. On March 4, 1889, he took oath as the 23rd President of United States of America.
In 1890, Congressional elections went stingingly against the Republicans, and party leaders decided to abandon him although he had cooperated with Congress on party legislation. Nevertheless, in 1892, the Republican Party re-nominated him, but he was defeated by Cleveland.
After his defeat in 1892 elections, he returned to his legal practice in Indiana and represented Venezuela in a celebrated boundary dispute with Great Britain. He wrote several books including ‘This Country of Ours’ (1897) and ‘Views of an Ex-President’ (1901). 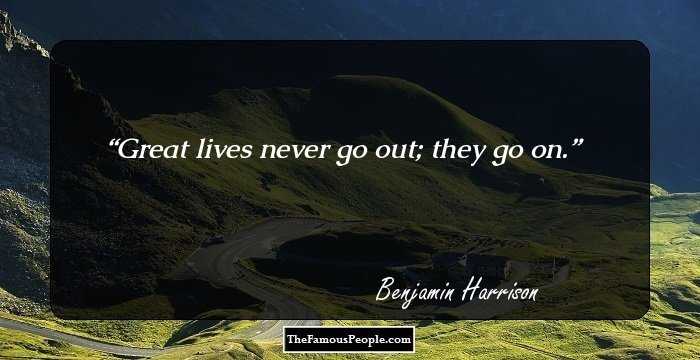 Major Works
During his tenure as a senator, he supported many of the issues that he later championed for as President such as pensions for Civil War veterans, statehood for Dakota, high protective tariffs, limited civil service reforms, a modernized navy, and conservation of wilderness lands.
He also supported the landmark Sherman Antitrust Act, the first bill ever to attempt to limit the power of America's giant corporations. In the area of civil rights for African Americans, he endorsed two bills designed to prevent southern states from denying African Americans the vote.
Personal Life & Legacy

On October 20, 1853, he married Caroline Lavinia Scott, a music teacher. The couple was blessed with two children; Russell Benjamin Harrison, born in 1854, and Mary "Mamie" Scott Harrison, born in 1858. Unfortunately, Caroline died in October 1892, while serving as the First Lady, after a brief struggle with tuberculosis.

On April 6, 1896, he married Mary Scott Dimmick, his niece and former secretary of his late wife. In 1897, the couple had a daughter, Elizabeth Harrison. 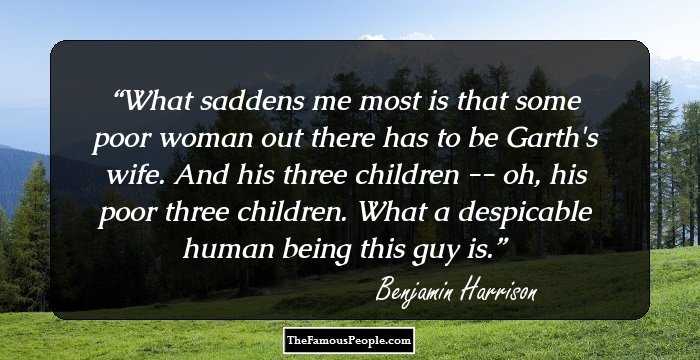 Quotes By Benjamin Harrison | Quote Of The Day | Top 100 Quotes

See the events in life of Benjamin Harrison in Chronological Order