(Dictator of Italy and Principal Founder of Fascism Who Was Prime Minister of Italy from 1922 to 1943.)

Fascist leader Benito Mussolini ruled Italy as its dictatorial prime minister, under the title ‘Il Duce,’ for 21 years. Having spent an unruly childhood, he grew up to be disobedient and short-tempered. Even though he made a name and career for himself in socialism by working for the ‘Italian Socialist Party’ and writing for socialist newspapers, he was later expelled from the party due to his support for ‘World War I,’ following which he formed the ‘Fascist Party’ to re-build Italy as a strong European power. After the 'March on Rome' in October 1922, he became the prime minister and gradually destroyed all political opposition. Thereafter, he consolidated his position through a series of laws and turned Italy into a one-party dictatorship. Mussolini remained in power until he was deposed in 1943. He later became the leader of the ‘Italian Social Republic,’ which was a German-supported regime in northern Italy. He held this post until his death in 1945. Matteo Salvini
29th July In History
DID WE MISS SOMEONE?
CLICK HERE AND TELL US
WE'LL MAKE SURE
THEY'RE HERE A.S.A.P
Quick Facts

Italian Celebrities
Prime Ministers
Political Leaders
Italian Men
Leo Leaders
Childhood & Early Life
Benito Amilcare Andrea Mussolini was born on July 29, 1883, in Dovia di Predappio, Forli province, Northern Italy, to blacksmith and socialist Alessandro Mussolini and pious Catholic elementary school teacher Rosa Mussolini. He was the eldest of his parents' three children.
Even though he was short-tempered and disobedient and expelled twice from school for stabbing fellow students with a penknife, he managed to get good scores and obtained a teaching certificate in 1901. 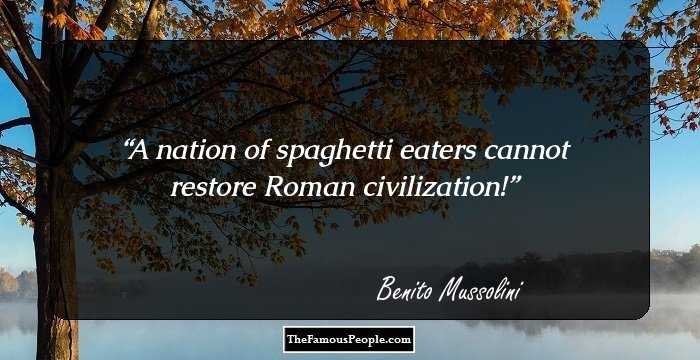 Continue Reading Below
Career
He worked as an elementary schoolteacher for a short period before moving to Switzerland in 1902 to escape military service and look for better work opportunities.
He took up work as a stonemason and got involved in promoting socialism, due to which he was arrested on various occasions. He then started writing for socialist periodical, ‘L’Avvenire del Lavoratore’ (The Worker’s Future).
In 1904, he was arrested by the Swiss authorities and deported to Italy, following which he joined the Italian army. He left the army in 1906 to resume teaching and journalism.
He moved to Trento, in the then-Austria-Hungary, and worked for a local socialist party. For the next couple of years, he worked as an editor and labor reader, gaining reputation for his views on nationalism and militarism.
In 1912, he became the editor of Italy’s ‘Socialist Party’ newspaper, ‘Avanti!’ (Forward).
Initially, he was against Italy’s participation in the ‘First World War,’ but later changed his stance on the pretext of making Italy a great power and regain the lost Austro-Hungarian territory.
He was expelled from the ‘Socialist Party’ for his opposition to the party's stance on neutrality in ‘World War I.’ Mussolini condemned the ‘Italian Socialist Party’ (PSI) and founded the fascist movement.
He resumed his journalistic activities in Milan, editing the newspaper ‘Il Popolo d’Italia’ (The People of Italy). He supported Italy’s participation in the war through his writings.
To increase fascist influence, he included several unemployed war veterans in his right-wing groups, which were organized into armed squads called ‘Black Shirts.’ He used ‘Black Shirts’ to threaten political opponents.
Continue Reading Below
In the summer of 1922, he led ‘March on Rome’ with over 30,000 fascist ‘Black Shirts,’ demanding the resignation of Prime Minister Luigi Facta. He also claimed that he has the ability to restore order.
Backed by King Victor Emmanuel III, who failed to foresee the consequences of Mussolini’s thoughts, he formed a new government in October 1922.
Gradually, he dismantled democratic institutions and destroyed all political opposition and imposed open dictatorship. Eventually in 1925, he declared himself a dictator and assumed the title ‘II Duce’ (the Leader).
He grew popular among key groups – industry, military, church, and farmers, who were benefitted by his public work programs and employment plans. For a decade, peace prevailed in Italy.
Since he wanted to transform Italy into a mighty empire, he invaded Ethiopia in 1935, using mustard gas. The Ethiopians surrendered to his modern tanks and airplanes and eventually, Ethiopia was added to his new empire in 1936.
With hopes of increasing his influence and extending his empire further, he sent troops and arms to the nationalists in Spain during the ‘Spanish Civil War’ in 1939.
Impressed with his successful invasions, German dictator Adolf Hitler collaborated with Mussolini on a military alliance called ‘Pact of Steel’ in 1939, following which he imposed anti-Jewish legislation in Italy.
His declaration of war on France and Britain in 1940 exposed his weaknesses in military equipment and army.
The military position of Italy was in a bad shape by early 1942. During the summer of 1943, the ‘Allied’ troops invaded Sicily, in the Mediterranean Sea, hoping to oust Mussolini from power.
Continue Reading Below
The ‘Allied Forces’ progressed further, dropping bombs on Rome, resulting in his arrest in July 1943 and imprisonment at a mountain ski resort in Abruzzo. However, he was rescued by German commandos soon after.
In September 1943, he was declared the head of a puppet government of ‘Italian Social Republic,’ in Northern Italy, which was controlled by Germany. He held this post till 1945. 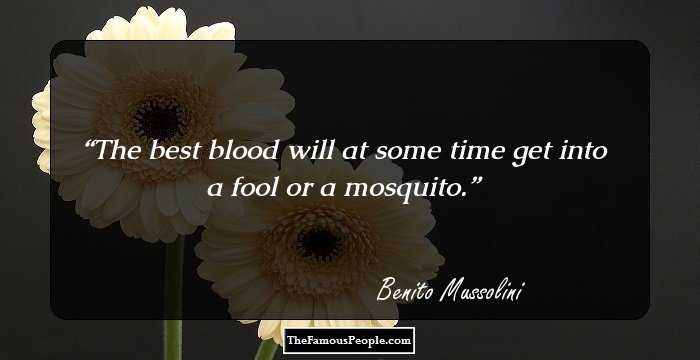 Quotes: Time, Will
Major Works
He formed a single, national group called ‘Fasci di Combattimento’ (Fascist Party) in 1919 to reconstruct Italy into a strong European power.
In October 1922, he formed a coalition government and became the youngest prime minister of Italy, at the age of 39, a record he held until Matteo Renzi was appointed the prime minister of Italy in February 2014.
Personal Life & Legacy
In 1910, he romanced Rachele Guidi and fathered a daughter, whom they named Edda. He married Guidi in 1915 and had four more children – Vittorio (1916), Bruno (1918), Romano (1927), and Anna Maria (1929).
Before marrying Rachele Guidi, he married Ida Dalser in Trento in 1914. Mussolini and Dalser had a son named Benito Albino Mussolini in 1915.
He is said to have been romantically involved with various females, who served as his mistresses, including Margherita Sarfatti and Clara Petacci.
While attempting an escape to Spain en-route Switzerland in April 1945, he and Petacci were captured by the Italian partisans and shot to death on April 28, along with other members of their party, in Mezzegra, near Dongo. Their bodies were brought to Milan on April 29, 1945, and hung upside down in public.
His body was initially buried in the Musocco cemetery in Milan, but was later re-interred in a crypt near Verano di Costa in August 1957, after being moved several times.
His life story has been adapted into several movies, such as ‘The Great Dictator’ (1940), ‘Mussolini: Ultimo atto’ (1974), ‘Mussolini and I’ (1985), ‘Benito’ (1993), and the award-winning Italian film ‘Vincere’ (2009).
His life has been depicted on television as well. Popular series based on his life include ‘Mussolini: The Untold Story’ (1985) and ‘Il Duce Canadese’ (2004). 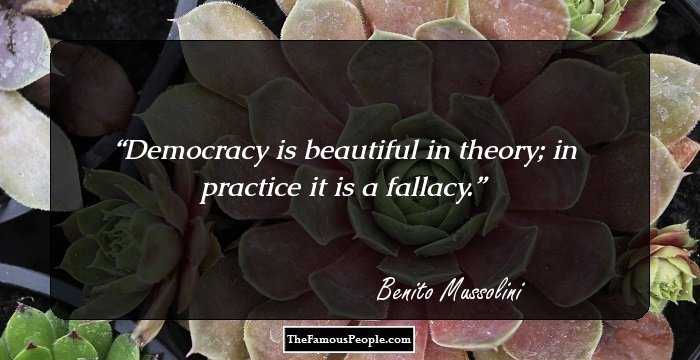 Quotes By Benito Mussolini | Quote Of The Day | Top 100 Quotes

See the events in life of Benito Mussolini in Chronological Order