Anthony Eden was an English politician who served as Foreign Secretary thrice in his career, and later also became the Prime Minister of UK. He carved out a career in the Foreign Office during important periods in the Second World War and the Cold War, and played a key role in regulating foreign policies to face the rise of the fascist powers. Born and raised in a conservative English family, he displayed great courage and ability in combat service during the First World War. His political ascent was steady, as he moved through a series of government posts mainly dealing with foreign affairs. As Secretary of State for Foreign Affairs, most of his tenure was dominated by the search for some form of binding agreement with the dictators on arms and territorial disputes. After Churchill’s retirement, Eden finally took the lead as the British Prime Minister, but it lasted only until his resignation a year later after the Suez Crisis. Even though, he justified that his action of an Israeli attack on Egypt, following the nationalization of Suez Canal, was to the best of British commercial interests, the badly performed invasion overshadowed his worldwide reputation as a skilled diplomat and brought an end to his political career. Despite the fact that he is most recalled for his controversial handling of the Suez crisis, Anthony Eden was undoubtedly a very able and committed politician Cause of Death: Metastasized Carcinoma

British Celebrities
Prime Ministers
Political Leaders
British Men
Christ Church, Oxford
Childhood & Early Life
Robert Anthony Eden was born on June 12, 1897, at Windlestone Hall, County Durham, England, to Sir William Eden, a baronet who belonged to an old titled family, and his wife, Sybil Frances Grey. He had an elder brother, John, and a younger brother, Nicholas, but unfortunately both died during World War I.
From 1907 to 1910, he received his education from Sandroyd School and later attended the Eton College.
During World War I, he served with the 21st (Yeoman Rifles) Battalion of the King's Royal Rifle Corps, and reached the rank of captain. Post-war, he graduated with a Double First in Oriental Languages from Christ Church, Oxford. 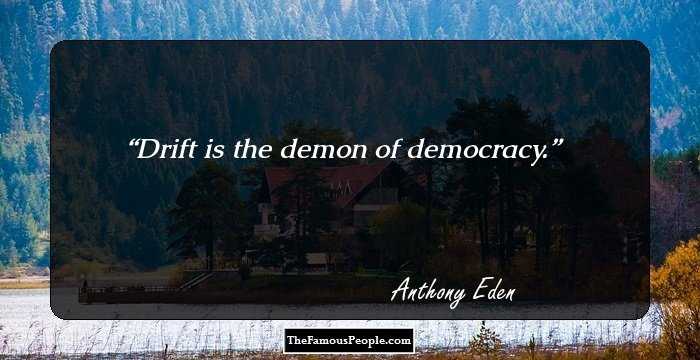 Continue Reading Below
Career
In November 1922 general election, Anthony Eden first contested for a seat but lost. He was later elected to the House of Commons in the December 1923 general election, as a Conservative.
During the 1924–1929 Conservative Government, Eden had his first stint in the administration. He served as Parliamentary Private Secretary first to the Home Secretary, Sir William Joynson Hicks, and later on to the Foreign Secretary Sir Austen Chamberlain.
In 1931, he was appointed the Under-Secretary for Foreign Affairs. In 1934, he was appointed Lord Privy Seal and the following year, he became the Minister for the ‘League of Nations’ in Stanley Baldwin's Government.
In December 1935, he first became the ‘Secretary of State for Foreign Affairs’, a post he served until February 1938. His resignation was largely ascribed to protest Prime Minister Chamberlain’s appeasement policy of Nazi Germany and Fascist Italy.
Upon the outbreak of World War II in 1939, he returned to Chamberlain's government with the post of ‘Secretary of State for Dominion Affairs’. After Winston Churchill replaced Chamberlain as the Prime Minister, Eden was appointed the Secretary of State for War.
In December 1940, he returned to the Foreign Office, and became in charge of handling much of the relations between Britain and de Gaulle during the last years of the war. He served as the Foreign Secretary until the defeat of the Conservatives in 1945 elections.
From 1945 to 1951, Eden served in opposition as Deputy Leader of the Conservative Party.
In October 1951, after the Conservatives returned to office, he was appointed the Foreign Secretary for a third time, and was also designated the Deputy Prime Minister.
In April 1955, when Churchill finally retired, Eden succeeded him as the Prime Minister of UK. The following year, Suez Crisis broke, when the Egyptian president nationalized the Suez Canal, which had been jointly owned by the British and French governments and individual shareholders.
Continue Reading Below
To complicate the situation, Eden followed an Israeli attack with an Anglo-French military force largely on his own initiative. But after a Soviet protest, domestic disapproval, and no support from the United States, he was forced into a humiliating retreat. This action led to severe strains in Anglo-Arab relations, as well as among other countries, and also eclipsed Eden’s worldwide reputation as a ‘Man of Peace’.
In January 1957, Eden resigned from the office due to health problems. Later in life, he published three volumes of political memoirs, ‘Full Circle’ (1960), ‘Facing the Dictators’ (1962), and ‘The Reckoning’ (1965). 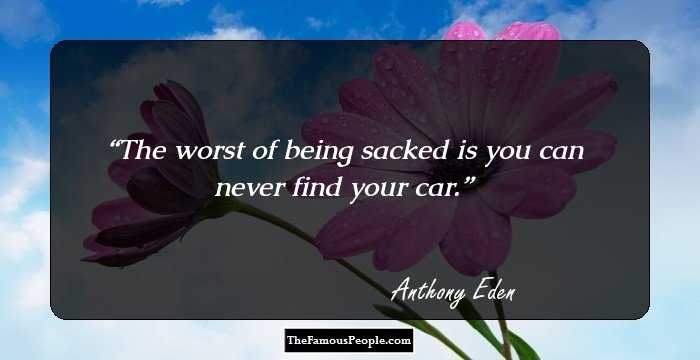 Major Works
In 1954, as the Foreign Secretary of the State and Deputy Prime Minister, he helped to resolve the Anglo-Iranian oil dispute, to settle the quarrel between Italy and Yugoslavia over Trieste, to stop the Indochina War, and to establish the Southeast Asia Treaty Organization (SEATO).
Awards & Achievements
He was awarded the Military Cross at the age of 21 and became the youngest brigade-major in the British Army to receive it.
He was also honored with the Victory Medal and the British War Medal.
In 1954, Eden was knighted and was later named ‘Earl of Avon’ in 1961. 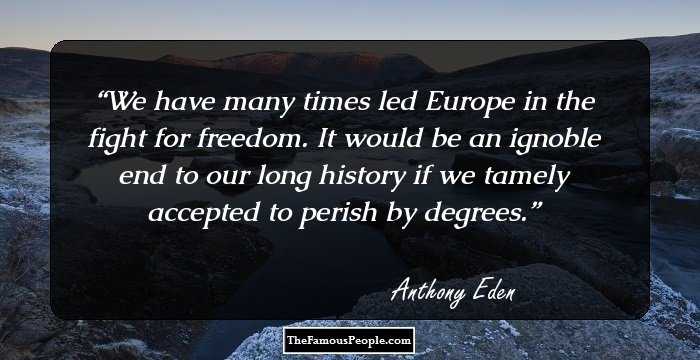 Personal Life & Legacy
In 1923, he married Beatrice Beckett and the couple had three sons, one of whom died in infancy. Unfortunately, the couple later broke up under the strain of a son who went missing in action during the World War II and finally got divorced in 1950.
In 1952, he married Winston Churchill's niece, Clarissa Spencer-Churchill, a nominal Roman Catholic. The couple remained together until Eden’s death.
Anthony Eden died on January 14, 1977, from liver cancer in Salisbury, England, at the age of 79. He was buried in St Mary's churchyard at Alvediston.
Recommended Lists:
Leaders #826

Quotes By Anthony Eden | Quote Of The Day | Top 100 Quotes

See the events in life of Anthony Eden in Chronological Order