Saint Anselm of Canterbury was a Benediction abbot, philosopher and theologian. He gave the ontological argument for the existence of God and is known for his satisfaction theory of atonement. Born into an Italian noble family, he is also called Anselm of Aosta after his birthplace Aosta and Anselm of Bec after his abbey in Bec valley. Although his father wanted him to prepare himself for a life in politics, he was never keen in it. Instead he left home at the age of 23 to study with Lanfranc of Pavia at Bec, eventually joining the abbey as a novice at the age of 27. At 30, he became the abbey’s prior and at 45 its abbot. Later, he became the Archbishop of Canterbury and had to go through severe hostility; but never wavered from his principles. A great scholar, he wrote several books and was canonized after his death. Christine de Pizan
DID WE MISS SOMEONE?
CLICK HERE AND TELL US
WE'LL MAKE SURE
THEY'RE HERE A.S.A.P
Quick Facts 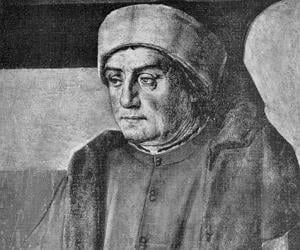