St Francis of Assisi was one of the most venerated religious figures in the history of Christianity. He was the founder of the Order of Friars Minor, more popularly known as the Franciscans. Born sometime in early 1180s to a prosperous silk merchant in Assisi, he led a very high spirited life in his early youth; but on receiving a call, he gave up everything to lead a life in poverty. He lived only for 44 years; but within such short period, he gathered around him thousands of men and women, who gave up everything to follow the path of Christ. For men, he founded the Order of Friars Minor; for women, the Order of Saint Clare; and for the householders, the Third Order of Saint Francis. Around two years before his death, he received the stigmata in a religious ecstasy, becoming the first recorded person to do so. Shortly after his death, he was canonized by the Pope and was also designated Patron Saint of Italy. Bonaventure
DID WE MISS SOMEONE?
CLICK HERE AND TELL US
WE'LL MAKE SURE
THEY'RE HERE A.S.A.P
Quick Facts

Italian People
Spiritual & Religious Leaders
Italian Men
Italian Saints
Italian Theologians
Childhood & Early Life
St. Francis of Assisi was born sometime between December 1181 and September 1182 in Assisi, an independent Ghibelline commune in the center of Umbria region of Italy. Some biographers have put his date of birth to September 26, 1182. He was one among his parents’ seven children.
His father, Pietro di Bernardone, was a prosperous silk merchant, who also owned farmland around Assisi. It is said that he loved everything French and was proficient in French language.
His mother, Pica de Bourlemont, came from an aristocrat family from Provence. Not much is known about her except that she was very beautiful. She must have also been very religious for when St Francis was born she had him baptized as Giovanni di Bernardore, after John the Baptist.
At that time, his father was away on business trip to France. When he came home, he was not pleased with such a marked association with a man of God and therefore changed his son’s name to Francesco di Pietro di Bernardone; Francesco literally means Frenchman.
Francesco had elementary education at a school associated with the Church of San Giorgio in Assisi. Here, in addition to mathematics, music and poetry, he learned to read and write Latin. From his father, he learned French.
As an adolescent, he led a carefree and rich life. By the age of 14, he left school to lead a group of young boys into merry making; wining, dining and very often breaking the city curfew. However, even during this period, his heart went out for the poor.
Although his father now made him attend his cloth business, his heart was not there. If young Francis had any ambition, it was to become a war hero like a French knights. He learned the art of archery, wrestling and horsemanship. 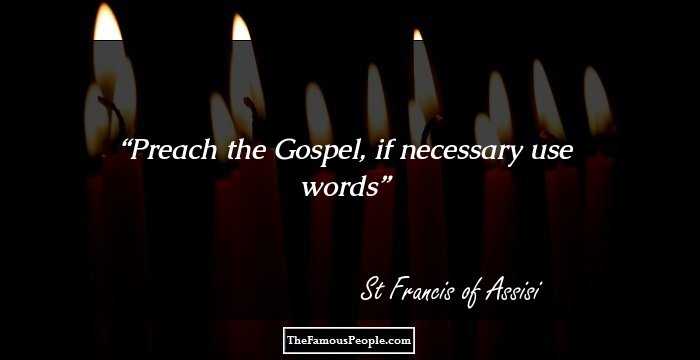 Continue Reading Below
War with Perugia
His chance came when in November 1202 war broke out between Assisi and its long-time enemy Perugia. Twenty year old Francis joined the cavalry and went off to fight; but untrained and inexperienced, he was taken a prisoner.
Seeing his expensive dress and new armor, the Perugia soldiers decided to demand ransom for his release. He was therefore thrown into a dank and unhealthy prison at Collestrada, where he remained imprisoned for almost a year, waiting for his father to pay the ransom.
It was during this period that Francis is believed to have his first vision, although nothing is known about it. Living in the damp and cold atmosphere, he was also afflicted with disease. Therefore, by the time the negotiation for the ransom was complete, Francis was a changed man, 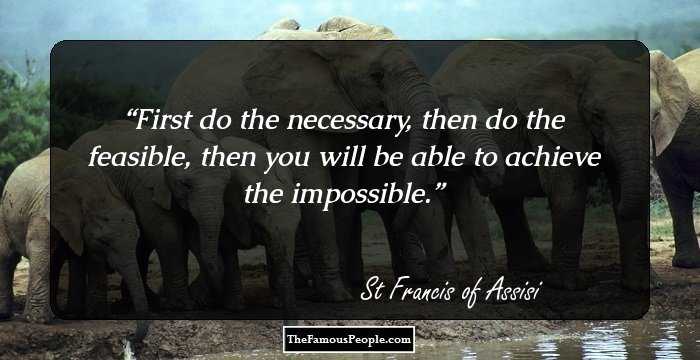