(American Aviator and Writer Who Became the First Woman to Receive a U.S. Glider Pilot License)

Advanced Search
The first American woman of her time to receive a glider pilot's license, Anne Morrow Lindbergh was a highly acclaimed and bestselling author apart from being the wife of the American aviator Charles Lindbergh. Along with her husband she explored and charted many air routes between continents, serving as his co-pilot, radio operator and navigator. Her book ‘Gift from the Sea' is regarded as one of seminal works in the genre of feminist literature. She authored more than 13 works, including novels, prose, poetry, travel books and personal diaries and letters. She was recipient of numerous awards and anecdotes, which she received for her aviation and writing. The Lindbergh family made headlines after their 20 month son was kidnapped and murdered, eventually the family relocated to Europe worried about the safety of their other children and also wanting to escape from the media frenzy. She was inducted into the International Women in Aviation Pioneer Hall of Fame, the National Women's Hall of Fame and the National Aviation Hall of Fame. Anne was a talented woman, constantly searching for her own identity in the shadow of a famous husband.

awards: 1933 - Hubbard Medal for having completed 40
000 miles (64
000 km) of exploratory flying with her husband Charles Lindbergh

American Celebrities
Novelists
Short Story Writers
American Women
Smith College
Childhood & Early Life
Anne Spencer Morrow was born in Englewood, New Jersey, U.S. to politician and businessman, Dwight W. Morrow and Elizabeth Reeve Cutter Morrow, a dedicated teacher and poet.
Her mother who was an active women’s right activist, encouraged her to develop a reading habit. This was perhaps what influenced young Morrow to read and develop the habit of writing in diaries.
In 1924, she graduated from The Chapin School, New York City. She later went to the Smith College, from where she obtained a degree in arts. 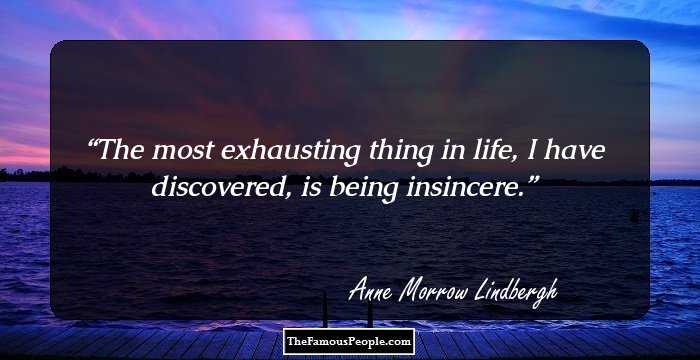 Quotes: Life, I
Continue Reading Below
Career
In 1930, she became the first American woman to earn a first-class glider pilot's license, after she flew solo that year. Along with her husband, aviator Charles Lindbergh, she would explore air routes.
In 1935, she published her book titled, ‘North to the Orient.' The book is a breath-taking account of the couple setting off on a flight to the Orient through the Great Circle Route.
In 1938, she came out with her book ‘Listen! The Wind', which revolved around the story of a survey flight in and around the North Atlantic Ocean. This was a time when air routes were not fully developed.
In 1940, she published the book titled, ‘The Wave of the Future: A Confession of Faith’. This book was written supporting her husband, who at that time lobbied for the US German peace treaty.
In 1944, she authored the book ‘The Steep Ascent'. This book was a fictional account that was based on a real life incident about a very dangerous flight journey over the Alps.
In 1955, she published one of her best-known works - 'Gift from the Sea', which was about American women in the mid-twentieth century. The following year, she authored, 'The Unicorn and other Poems'.
Published in 1962, ‘Dearly Beloved' was one of her bestselling novels. The plot was set around a wedding and delved into intricacies of human relationships. She subsequently published, ‘Earth Shine'. 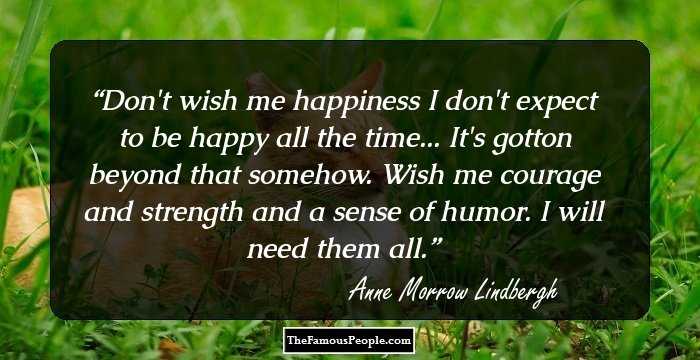 Quotes: Me, Will, Need
Major Works
Her book ‘Gift from the Sea’ is one of her seminal works in the field of feminist literature. The book has sold over three million copies and has been translated into more than 45 languages.
Continue Reading Below
Awards & Achievements
One of her essays on women in the 18 century received the Elizabeth Montagu Prize.
Her work of fiction, ‘Lida Was Beautiful' won the Mary Augusta Jordan Literary Prize.
In 1933, she was honoured with the U.S. Flag Association Cross of Honor for her survey in transatlantic air routes.
In 1933, she was awarded the Aerospace Explorer Award.
In 1934, she was awarded the Hubbard Medal by the National Geographic Society for flying 40,000 miles.
In 1935, she received the inaugural National Book Award for the category of ‘Most Distinguished General Nonfiction' for her book ‘North to the Orient'.
In 1979, she was inducted into the National Aviation Hall of Fame.
In 1996, she was inducted into the National Women's Hall of Fame.
In 1999, she was inducted into the International Women in Aviation Pioneer Hall of Fame.
Continue Reading Below
She was the recipient of the Christopher Award for her book, 'War Within and Without'. 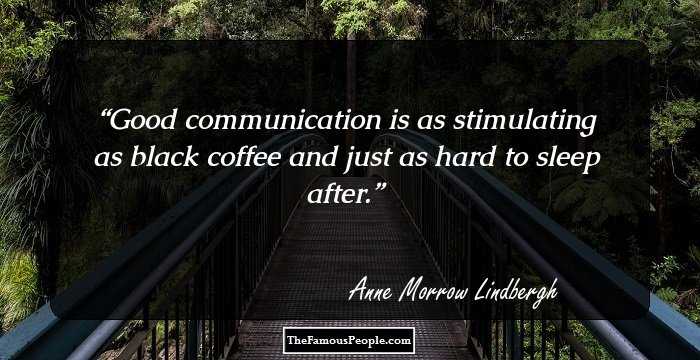 Personal Life & Legacy
In 1927, she met her future husband, acclaimed American aviator Charles Lindbergh in Mexico City. He was visiting the Morrow household at that time. She wrote in her diary about their meeting and it is believed that she was rather impressed by his height.
On May 27, 1929, after knowing Charles Lindbergh for two years, she married him in a private ceremony at the Morrow house in Englewood, New Jersey. They had six children together.
On March 1, 1932, tragedy struck the Lindbergh household, when her 20 month child, Charles Augustus Lindbergh Jr was kidnapped from their home in East Amwell, New Jersey.
In May 1932, the body of her alleged kidnapped baby was later found around four miles from the Lindbergh house. This resulted in the trail and execution of the Bruno Richard Hauptmann, who was found guilty.
In 1935, the Lindbergh family, anxious about the safety of their other children secretly went to Europe. They also wanted to get away from the media attention and lead a private life.
In 1971, she published her memoir titled, ‘Bring Me a Unicorn: Diaries and Letters of Anne Morrow Lindbergh'. This was the first volume of her diaries and letters.
In 1973, she came out with the book, ‘Hour of Gold, Hour of Lead: Diaries And Letters Of Anne Morrow Lindbergh’.
In 1974, volume of diaries and letters titled, ‘Locked Rooms Open Doors: Diaries And Letters Of Anne Morrow Lindbergh' was published.
In 1976, her memoir, ‘Flower And The Nettle: Diaries And Letters Of Anne Morrow Lindbergh' was published.
In 1980, the last of her series of books of her diaries and letters titled, ‘War Without and Within: Diaries and Letters of Anne Morrow Lindbergh' was published.
In the 1990s, a series of strokes affected her health, after which she lived in Connecticut, taken care by a set of caregivers. In 1999, she contracted pneumonia.
She died at the age of 94 after she suffered from a stroke.
Trivia
This woman aviator and author was seven months pregnant when she set out on a long flight journey, on the journey she ran the plane’s radio and also gathered information on weather conditions.