(Remembered for Making the First Nonstop Solo Flight Across the Atlantic)

A man whose life is an example of enduring accomplishment and triumph, Charles Lindbergh was one of the most skilful aviators of the 20th century. He is remembered for flying the first solo non-stop flight from New York to Paris, after which he gained international fan following and adulation. He used his popularity to promote the development of commercial aviation and U.S Air Mail. A leader of the anti-war America First movement, Lindberg was against the U.S getting into war with Europe initially. However, he changed his stand and supported the war effort soon after the incident on Pearl Harbour. Born in Detroit, Michigan, Lindbergh right from his younger days displayed a keen sense of interest in 'the mechanics of motorized transportation'. He eventually dropped out of university to attend flight training school. He was nicknamed, 'Slim’, ‘Lucky Lindy' and 'The Lone Eagle'. As a U.S. Army Air Corps Reserve officer, Lindbergh was the recipient of the Medal of Honor, highest military decoration in the United States. He was also the recipient of many other prestigious awards and anecdotes. American Celebrities
Aviators
American Men
American Pilots
American Aviators
Childhood & Early Life
Charles Augustus Lindbergh was born in Detroit, Michigan, United States to Charles Augustus Lindbergh, a Swedish immigrant and Evangeline Lodge Land. He was mostly raised in Little Falls, Minnesota.
He attended the Little Falls High School, from where he graduated in 1918. He attended many other schools but dropped out of them mostly after a year or two.
In 1920, he enrolled himself at the College of Engineering at the University of Wisconsin–Madison, from where he dropped out after two years in order to pursue flight training in Lincoln, Nebraska.
In February 1922, he began to attend the Nebraska Aircraft Corporation's flying school and in April that year, he went on the Lincoln Standard Tourabout biplane, as a passenger. 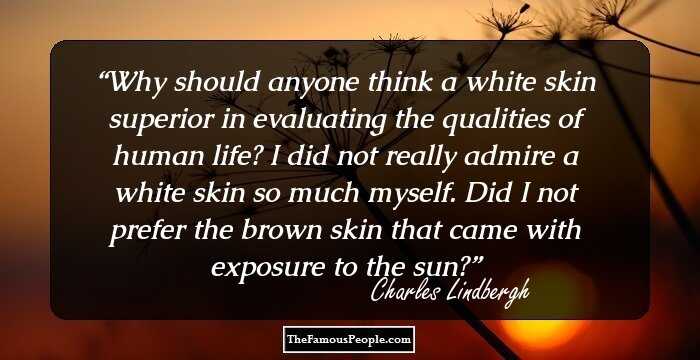 Continue Reading Below
Career
In April 1922, at the Nebraska Aircraft Corporation, he was given his first formal flying lesson. In June, he quit Nebraska to earn money and get more flight experience.
Upon leaving Nebraska, he spent the first few months barnstorming across Nebraska, Kansas, Colorado and Wyoming. In Montana, he did wing walking and parachuting with E.G. Bahl and later H.L. Lynch.
For a brief period, he worked as an aeroplane mechanic at the Billings Municipal Airport. After winter set in, he went back to Minnesota, to his father’s home, taking a break from flying for some time.
In May 1923, he went on his first solo flight at the Souther Field in Americus, Georgia. The following year, he joined the U.S. Army and was trained as an Army Air Service Reserve pilot.
On March 5, 1925, he met with a serious flying accident, a mid-air collision, while he was practicing aerial combat manoeuvres. That year, he was commissioned as a 2nd Lieutenant in the Air Service Reserve Corps.
In October 1925, he was employed as a chief pilot for 278-mile Contract Air Mail Route #2 of Robertson Aircraft Corporation. This provided service between St. Louis and Chicago.
Since the army did not require any additional active duty pilots, he went on to pursue civilian aviation. In November 1925, after he joined the 110th Observation Squadron, 35th Division, Missouri National Guard, he did some military flying. He was later promoted as a 1st Lieutenant.
In 1926, he took an Oath of Mail Messengers to the Post Office Department and was formally declared responsible for 'care, custody and conveyance' of U.S. Mails.
Until the mid-month of February 1927, he continued to serve as the chief pilot of CAM-2, after which he travelled to San Diego, California, to supervise the construction of the 'Spirit of St. Louis', a monoplane.
Continue Reading Below
On May 20, 1927, he took off from Roosevelt Field in Long Island, New York, on the 'Spirit of St. Louis'. On May 21, after a journey of 33 hours, 30 minutes he landed at A�roport Le Bourget in Paris, France. He was welcomed by more than 150,000 spectators. This was the first non-stop flight from New York to Paris.
Later in 1927, he came out with his book titled, ‘WE’, which was published by G.P. Putnam's Sons. The book became a bestseller and was translated into most of the major foreign languages.
From July 1927, he went on a U.S tour, on behalf of the Daniel Guggenheim Fund for the Promotion of Aeronautics’. The tour required him to travel 82 cities and deliver speeches.
From December 1927 to February 1928, he went on his second tour, called ‘Good Will Tour' to 16 Latin American countries. Among many others, he visited Mexico, where he met his future wife.
After he moved to England, he worked with Nobel Prize-winning French surgeon Dr. Alexis Carrel on creating an artificial heart. In a book in 1938, ‘The Culture of Organs’, they described an artificial heart.
From 1936 to 1938, he travelled many times to Germany and reported about the German aviation and the German Air Force to the U. S. army.
He believed that Germany’s air power was incredible and unbeatable, thus he suggested that the U.S should not get involved with the war in Europe. This earned him negative reputation.
After the Pearl Harbour, he changed his stand on war and became involved in the war effort. He also worked with Henry Ford on bomber and with the United Aircraft, as an adviser and test pilot.
After the World War II, he became the Chief of Staff of the United States Air Force. He also worked with Pan American World Airways. In 1968, he met with the crew members of Apollo 8, the first spacecraft to travel to the moon.
Continue Reading Below 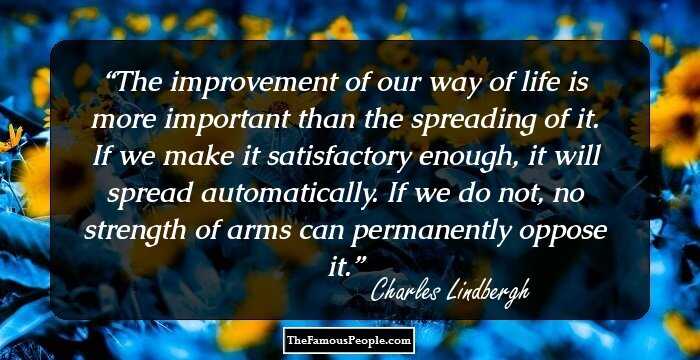 Quotes: Life
Awards & Achievements
He was awarded the French L�gion d'honneur, conferred by the president of France, Gaston Doumergue.
Upon his arrival to the United States after the iconic feat of a non-stop flight between New York and Paris, then-President of the United States of America awarded him the Distinguished Flying Cross.
In 1927, the Mayor’s Committee on Receptions of the City of New York honoured him with a grand banquet at the Hotel Commodore. The same year, he was honoured with Medal of Honor
On January 2, 1928, he appeared on ‘TIME’ magazine as 'Man of the Year'. The same year, he was conferred with the prestigious Congressional Gold Medal.
In 1954, he was the recipient of the Pulitzer Prize for his book, 'The Spirit of St. Louis'.
Other honorary awards won by him include, Hubbard Medal, Silver Buffalor Award, Wright Brothers Memorial Trophy, Daniel Guggenheim Medal, Knight of the Order of Leopold, Royal Air Force Cross, Service Cross of the German Eagle, Official Royal Air Force Museum Medal, F�d�ration A�ronautique Internationale FAI Gold Medal and ICAO Edward Warner Award.
Personal Life & Legacy
In 1927, the 'Lindbergh Air Mail' Stamp, which depicted the 'Spirit of St. Louis' was issued by the U.S. Post Office Department.
On June 13, 1927, in order to honour his achievements, a ticker tape parade was held in New York City, down 5th Avenue.
Continue Reading Below
On a goodwill tour to Mexico in 1927, he met Anne Morrow, daughter of Dwight Morrow, U.S. Ambassador to Mexico. They became romantically involved.
In 1928, a statue in his honour was constructed at the Le Bourget Airport in Paris.
In April 1928, he donated 'Spirit of St. Louis' to the Smithsonian Institution. The plane is now displayed on the National Air and Space Museum.
On May 27, 1929, he married his girlfriend, Anne Morrow, with whom he fathered six children.
Almost 29 years after his death, it was reported that this aviation pioneer had fathered three children with Brigitte Hesshaimer, a German hat maker. It was later found that he had fathered four more children, from two other affairs.
Tragedy struck the Lindbergh household on the eve of March 1, 1932, when his 20 month son, Charles Augustus Lindbergh was kidnapped from his home in East Amwell, New Jersey.
On May 12, 1932, his kidnapped son was murdered and his body was recovered near his home. After investigation it was found that Bruno Richard Hauptmann was the culprit. The latter was arrested and sentenced to death.
In 1935, the Lindbergh family secretly relocated to Europe, concerned about the safety of his other children and with an aim to escape the constant media attention.
He authored the books, ‘Of Flight and Life’ and ‘The Spirit of St. Louis’.
He died at the age of 72 in Kipahulu, Maui, Hawaii due to lymphoma a type of blood cancer. He was laid to rest at the PalapalaHo'omau Church in Kipahulu, Maui.
The United States Terminal 1-Lindbergh at Minneapolis-Saint Paul International Airport is named after him. In the airport there is a replica of 'The Spirit of St. Louis'.
He has been an inspiration to many films, television shows and works of music. Some of which include, 'Charles A. Lindbergh', a documentary film, '40, 000 Miles with Lindbergh' and 'The American Experience—Lindbergh: The Shocking, Turbulent Life of America's Lone Eagle'. 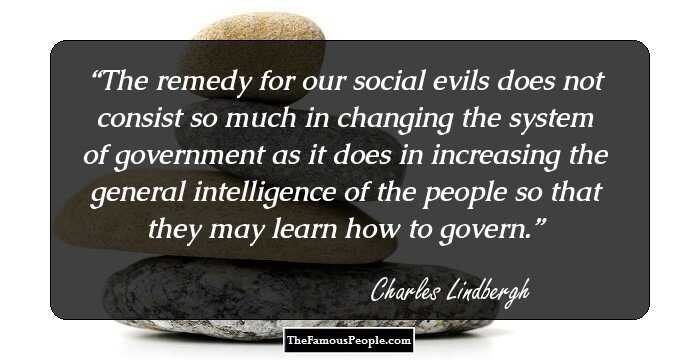 Trivia
This legendary American aviator and author insisted that his wife keep a regular track of all her household expenditures in account book, even if it was 15 cents for rubber bands.
Recommended Lists:
Inventors & Discoverers #46

Quotes By Charles Lindbergh | Quote Of The Day | Top 100 Quotes

See the events in life of Charles Lindbergh in Chronological Order