Martha Gellhorn was a fearless and quick-witted lady of her era. She was a celebrated American novelist and journalist who chronicled the lives of common people affected by war and conflict. Apart from being one of the first female war correspondents, she is also known as one of the best war reporters of the 20th century. Her career spanned over 60 years and she reported almost every major war that happened all over the world in that period. She largely distrusted politicians and always advocated the cause of common troubled people. As a novelist, her fictional work was characterized by lucid prose. Some of her famous novels include 'A Stricken Field' (1939), 'The Lowest Trees Have Tops' (1967) and a collection of stories, 'The Weather in Africa' (1978). For a brief period, she was married to American author Ernest Hemingway as his third wife. Independent and self-sustained, she famously refused to being reduced to a "footnote" in the bestselling author's life. The last days of her life were painful. She was unwell and almost completely lost her eye sight by the age of 89. She apparently committed suicide in 1998. In 1999, the Martha Gellhorn Prize for Journalism was posthumously established in her memory
Continue Reading Below American Celebrities
Journalists
American Women
Bryn Mawr College
Women Writers
Childhood & Early Life
Martha Gellhorn was born on November 8, 1908 in St. Louis, Missouri to Edna Fischel Gellhorn, a suffragist and George Gellhorn, a gynecologist. She was of Jewish origin. Her brothers, Walter Gellhorn and Alfred Gellhorn were also well-known personalities; Walter was a renowned law professor at Columbia University and Alfred was an oncologist.
She studied at John Burroughs School in St. Louis and later joined Bryn Mawr College, Philadelphia, in 1926. Soon, she left the graduation course to pursue a career in journalism. American magazine 'The New Republic' featured her maiden articles.
Resolute to become an international reporter, she traveled to Paris in 1930 where she worked at the United Press Bureau. During this period, she became an active participant in the pacifist movement and recorded her experiences in the book 'What Mad Pursuit' (1934). 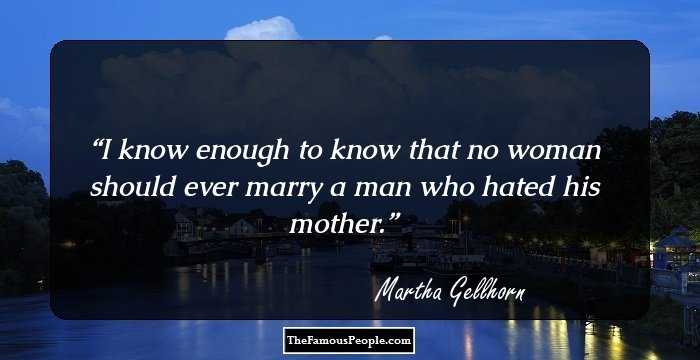 The Most Popular US Veterans
Career
Back in the United States, Martha Gellhorn was hired by Harry Hopkins as a field investigator for Federal Emergency Relief Administration (FERA). She toured across the country to report on the effect of the Great Depression. Together with photographer Dorothea Lange, they documented the lives of poor and starving people. They also explored forbidden subjects in their investigation making them key contributors to American history.
She met Earnest Hemingway in 1936 in Florida. Together, they travelled to Spain to report the Spanish Civil War. At that time, she was employed by Collier's Weekly.
She reported on the rise of Adolf Hitler in Germany and Czechoslovakia. She recounted the war from other countries like Hong Kong, Singapore, Burma, England, and Finland. She also described the activities of World War II in the novel 'A Stricken Field' (1940).
Martha Gellhorn impersonated as a stretcher carrier to witness the Normandy landings on D-Day June 6, 1944; being the only woman to land at Normandy that day.
She reported the Vietnam War and the Arab-Israel conflicts in the 1960s and 70s while working for the Atlantic Monthly. In the next decade she reported the Civil Wars in Central America.
Before retiring from journalism due to advanced age, she successfully reported the US invasion of Panama in 1989. Unfortunately, an unsuccessful cataract surgery turned her near blind making her unfit to report the Balkan conflicts in the 1990s.
Her last foreign assignment, a report on poverty, was in Brazil in 1995 and was published in the literary journal ‘Granta’. She completed this assignment with great difficulty because of her failing eye sight. 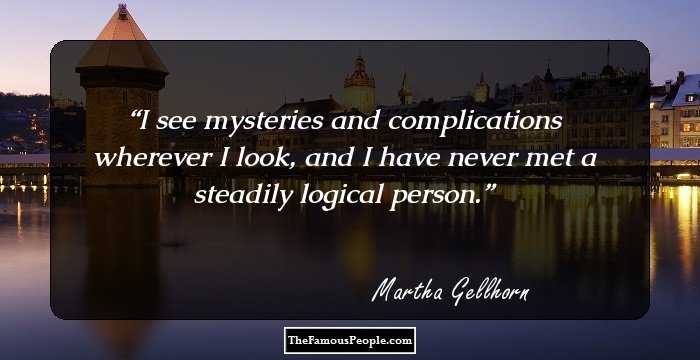 Quotes: Never, I
Major Works
Her first book 'The Trouble I’ve Seen' (1936) regarding the impact of the great depression on the American people had a sensational response and was hugely successful.
Continue Reading Below
As a leading war correspondent, she authored several articles such as 'The Face of War' (1959) – an assortment of wartime writing and 'The View from the Ground' (1988) an assortment of peacetime essays. In between, she also authored 'Vietnam: A New Kind of War' (1966).
Her journeys, including a voyage with Hemingway are described in 'Travels with Myself and Another: A Memoir' (1978).
Awards & Achievements
She was the only lady and one among five persons to be honored in the American Journalists stamp series of 2008.
She was the only lady at Normandy on D-Day June 6, 1944. She impersonated as a stretcher bearer to be present there. 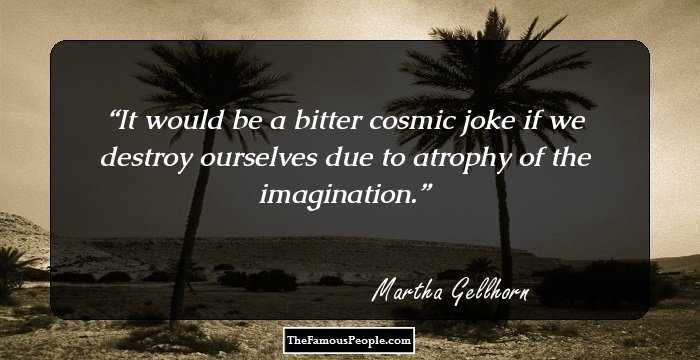 Personal Life & Legacy
At 22 years of age, Martha Gellhorn's first significant affair was with French economist Bertrand de Jouvenel. It lasted for four years.
She met Ernest Hemingway in 1936 in Florida and four years later they were married. She became Hemingway’s third wife. However, she disliked the fame associated with being his wife. She famously remarked that she had no intention of being a footnote in someone else's life. She divorced Hemmingway in 1945.
She had an affair with Major General James M. Gavin of U.S.A while she was still married to Hemingway.
She adopted a child called Sandy in 1949. However, after a brief spell of time, the boy was left with relatives leading to a supposedly estranged mother-son relationship.
After divorcing Hemingway and involving in a few romantic relationships, she married the T. S. Matthews, the former managing editor of Time Magazine in 1954. The marriage took her to London which became her home for the rest of her life. The marriage, however, ended in 1963.
Towards the end of her life, she was almost blind and suffered from ovarian and liver cancer. Martha Gellhorn committed suicide on February 15, 1998 in London at the age of 89. She ended her life by swallowing a cyanide capsule.
Throughout her life, she published various books of fiction, travelogues and reportage. After her death, few of her letters were printed in 2006.
The Martha Gellhorn Prize for Journalism was posthumously established in 1999 in her memory.
Trivia
Martha Gellhorn had homes in 19 different locations.
Recommended Lists:
Media Personalities #185
You May Like

Quotes By Martha Gellhorn | Quote Of The Day | Top 100 Quotes

See the events in life of Martha Gellhorn in Chronological Order