Advanced Search
Angus McKinnon Young is a Scottish born Australian guitarist, songwriter and co-founder of the Australian hard rock band, AC/DC. His family migrated to Australia where he studied at Ashfield Boys High School. He dropped out of school at the age of 15. After playing in the band Kantuckee, later called Tantrum, he and his brother Malcolm formed the band AC/DC. He chose the school uniform as his signature look. Their first single was “Can I Sit Next To You”, and their debut album was “High Voltage”. Their studio album “Highway to Hell” became their best-selling album. It was overtaken by the album “Back in Black”, released as a tribute to Bon Scott, the band’s lead singer who died from alcohol poisoning. It became the second highest-selling album worldwide. The album “For Those About to Rock We Salute You” was a big success. The band’s glory was reinstated with the studio album “The Razors Edge”. With the album “Black Ice”, AC/DC finally won a Grammy for the track “War Machine”, after seven nominations. AC/DC were also inducted into the Rock and Roll Hall of Fame. Australian People
Hard Rock Musicians
Australian Men
Aries Musicians
Male Musicians
Childhood & Early Life
Angus Young was born on 31 March 1955 to William and Margaret Young, and was the youngest of eight children. In 1963, he and his parents migrated to Sydney, Australia, along with his siblings, Malcolm, George and Margaret.
He first started playing a banjo, and then the guitar on a cheap acoustic model purchased second-hand by his mother. His first Gibson SG was also bought second-hand.
At 15, he dropped out of Ashfield Boys High School. Initially, he played in a local group called Kantuckee. The band split, and was later called Tantrum.
Continue Reading Below
Career & Later Life
In 1973, he and his brother Malcolm formed AC/DC with Angus on lead guitar, Malcolm on rhythm guitar, Colin Burgess on drums, Larry Van Kriedt on bass guitar and Dave Evans as vocalist.
Their first single was “Can I Sit Next To You”. It was later re-recorded with Bon Scott as their vocalist as “Can I Sit Next To You Girl”.
After trying a number of stage costumes, he finally settled on his signature schoolboy look as suggested by his sister Margaret who created the original uniform. Later he used his school uniform.
In 1975, AC/DC released their debut album, “High Voltage”. They followed it up by “T.N.T.”, “Dirty Deeds Done Dirt Cheap”, “Let There Be Rock” and “Powerage” over the next three years.
“Highway to Hell”, a studio album, became their best-selling in 1979, and launched them to new heights of fame. The group’s lead singer Bon Scott died from alcohol poisoning shortly afterwards.
Following Bon Scott’s death, AC/DC recruited ex-Geordie singer, Brian Johnson to finish the album they had started. In 1980, “Back in Black” was released as a tribute to Scott.
AC/DC’s 1981 album “For Those About to Rock We Salute You” was a big success. The following albums “Flick of the Switch”, “Fly on the Wall” and “Blow Up Your Video” gained mediocre success.
AC/DC’s 1990 studio album “The Razors Edge” brought them some glory. It reached 5x multi-platinum in the US, and sold between 10 and 12 million copies worldwide.
The 1995 album “Ballbreaker” included the tracks, “Hard as a Rock”, “Boogie Man”, “Cover You in Oil”, “Hail Caesar”, and “Ballbreaker”. The album “Stiff Upper Lip” was released five years later.
Continue Reading Below
They put together the songs used for the “Iron Man 2” soundtrack into an album released in 2010. It reached number 1 in many countries including the UK, and number 4 in the US.
Young has designed the Angus Young SG, in collaboration with Gibson Guitar Corporation, with a pick-up in the bridge position, and a ’57 Classic Humbucker and “lightning bolt” inlays in the neck.
Major Works
The album, “Back in Black” became the second highest-selling album worldwide, behind only Michael Jackson’s “Thriller”. It reached 22x multi-platinum in the US alone, and sold 50 million copies worldwide.
In 2008, AC/DC brought out “Black Ice” which debuted at number 1 in 29 countries, and was certified multi-platinum in 14. It became one of their most successful albums worldwide.
Awards & Achievements
AC/DC won their first Grammy Award in 2010 for the track “War Machine” in the category Best Hard Rock Performance from the album “Black Ice”. The album won a nomination for Best Rock Album.
In 2003, AC/DC were inducted into the Rock and Roll Hall of Fame. The following year they were ranked number 72 on Rolling Stone magazine’s list of the “100 greatest artists of all time”.
Personal Life & Legacy
Young married Ellen in 1980. They live in Kangaroo Point, Sydney. They also own a home in Aalten, Netherlands. Angus is a heavy smoker, but does not drink.
Trivia
This talented musician’s band, AC/DC, was named so after seeing the letters “AC/DC” on the back of their sister Margaret’s sewing machine. AC/DC stands for Alternating Current/Direct Current.
This popular guitarist frequently does the Chuck Berry duck walk, and also throws himself to the ground, kicking, shaking, and spinning in circles in a kind of spasm, while playing the guitar.
Recommended Lists:
Lyricists & Songwriters #187

See the events in life of Angus Young in Chronological Order 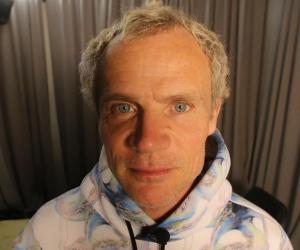