Andy Goldsworthy is one of the few sculptors who have redefined the approach of creating fine artistic structures. Unlike most sculptors, who carve stones and use clay to create their imaginations, Andy’s works look more like a natural occurrence. At a first glance, one may find it difficult to believe that his works are ‘artificially created’. He often uses brightly coloured flowers, icicles, leaves, mud, pinecones, snow, stone, twigs, and thorns. However, most of his work is temporary, which degrades over time. One such creation was the gigantic ‘Ice Snake’, which melted due to the heat. Though he has created very few pieces of art of great prominence, each one of them have been considered to be a masterpiece by many. Andy owes his love towards nature to his family, who introduced him to agriculture at a very tender age. Since then, he had the idea of creating sculptures using already existing elements of nature. Goldsworthy has presented his works at many art exhibitions, over a period of four decades. Few of these include ‘Hand to Earth—Sculpture 1976–90’, which was held at the Leeds City Art Gallery, and ‘Hard Earth’.

Prince Harry
Sculptors #6
Miscellaneous #1162
Photographers #45
26th July In History
DID WE MISS SOMEONE?
CLICK HERE AND TELL US
WE'LL MAKE SURE
THEY'RE HERE A.S.A.P
Quick Facts

British People
Male Sculptors
Briton Sculptors
British Photographers
Leo Men
Childhood & Early Life
Andy was born on July 26, 1956 to Fredrick Alan and Muriel Goldsworthy. Andy’s father Allan Goldsworthy worked as a Professor of Mathematics at the University of Leeds. Though Andy’s place of birth is Cheshire, he was raised in the town of Harrogate, located in Yorkshire.
Andy was very fond of agriculture since his early days. He started working in the farms at the tender age of 13.
Andy Goldsworthy pursued his basic education in Fine Art from the ‘Bradford College of Art’ during the period 1974-75. Immediately after the course ended, he moved to the ‘Preston Polytechnic’ to pursue his further education.
During his time at Preston, Andy attended a presentation on ‘Long Art’ by Professor Richard Long. The session taught him how to merge elements of nature such as wood and water into works of art.
The pictures of Professor Long inspired Andy so much that he moved to Morecambe Bay in Lancashire to pursue his first work of art, with a professional approach. In 1978, he graduated from the institution with a Bachelor’s degree in arts, B.A. 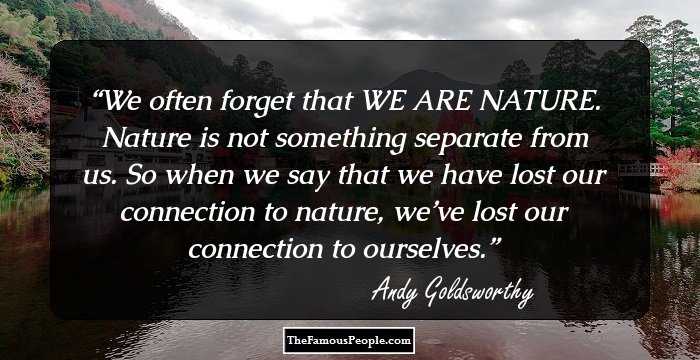 The Hottest Male Celebrities With The Best Abs
Career
After completing his studies Andy stayed in places like Yorkshire and Lancashire for a few years, before moving to Dumfriesshire, Scotland, in 1985. Andy, later, headed to the North Pole to work on an exotic piece of art which is known today as ‘Touching North’.
In 1994, he built a series of arches near his home in Dumfriesshire, called ‘Herd of Arches’, which was quite similar to ‘Touching North’.
Andy worked on his next piece of art in the 1990s, which was called ‘Sheep Folds’. He was backed by a stipend from the government for this work. Andy replicated the enclosures used for protecting herds of sheep, through this work. He created a series of enclosures made of dry stone across the countryside to achieve his vision.
Though Andy had visited United States several times earlier for work related commitments, his first project of great significance ‘The Storm King Wall’ came in 1997. The wall was installed at the ‘Strom King Arts Centre’ in Mountainville, New York.
Goldsworthy then installed a temporary piece of art at the Canadian province of Nova Scotia in 1999. This sculpture named ‘Ice Snake’, stretched down a river, and later melted because of the sun’s heat.
The ace sculptor was invited to New York by the concerned authorities of the ‘Museum of Jewish Heritage’, in 2003. He was asked to lend his artistic touch to the property. In the second floor of the building, he created a ‘Garden of stones’ memorial, for which he used Granite and Oak Saplings. 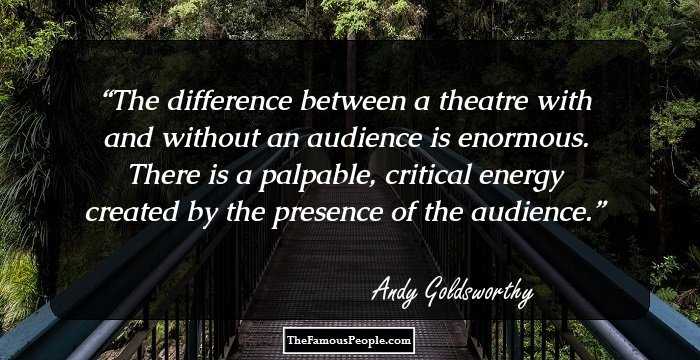 Major Works
Though each work of Andy was considered to be masterpiece by art lovers, one of his most significant works is ‘The Storm King Wall’. This wall is a gigantic structure, which is around 2000 feet long. The structure was created using natural rocks and dry stones from the region, instead of the traditional mortar.
Awards and Achievements
Andy won the ‘North West Arts Award’ in 1979. He was hardly 23 years old at the time.
Continue Reading Below
The very next year he was felicitated with the ‘Yorkshire Arts Award’ for his contribution towards the field of art.
He has received the ‘Northern Arts Award’ consecutively, during the period 1981-82.
In the late 1980s he received the ‘Northern Arts Bursary’, ‘Scottish Arts Council’, and ‘Northern Electricity Arts’ awards for his excellence in sculpture making.
He was honoured by the British government in 2000, which appointed him as the ‘Order of the British Empire’. 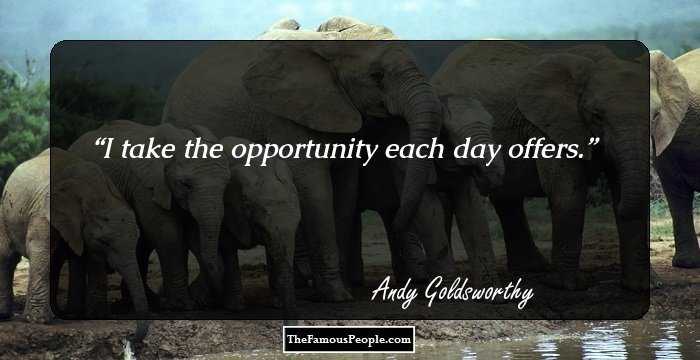 Quotes: I
Personal Life & Legacy
Andy Goldsworthy married Judith Gregson in 1982. The couple had four children. The couple spent most part of their married life in Dumfriesshire.
Andy got separated from Judith later. He now lives in the same dwelling along with Tina Fiske. Andy had collaborated with Tina for few sculpture projects, after which they decided to stay together.
A documentary based on the life of Andy Goldsworthy was made in 2001. This celluloid adaptation of his life was titled ‘Rivers and Tides’. This film, which garnered critical acclaim, and even won many awards, was directed by Thomas Riedelsheimer.
Trivia
Andy claims that farming was his inspiration behind becoming a sculptor. He rarely uses artificial elements in any of his works.
You May Like

See the events in life of Andy Goldsworthy in Chronological Order