Munshi Premchand was an Indian writer counted amongst the greatest Hindustani writers of the early 20th century. He was a novelist, short story writer, and dramatist who penned over a dozen novels, hundreds of short stories, and numerous essays. He also translated a number of literary works of other languages into Hindi. A teacher by profession, he began his literary career as a freelancer in Urdu. He was an independent minded patriotic soul and his initial literary works in Urdu were replete with descriptions of the Indian nationalist movement that was building up in various parts of India. Soon he switched over to Hindi and established himself as a much loved author with his poignant short stories and novels that not only entertained the readers, but also carried significant social messages. He was much moved by the inhumane manner in which Indian women of his time were treated, and often depicted the miserable plight of girls and women in his stories hoping to create awareness in the minds of his readers. A true patriot, he quit his government job as a part of the non-cooperation movement called by Mahatma Gandhi even though he had a growing family to feed. He was eventually elected as the first President of the Progressive Writers' Association in Lucknow. Amrita Pritam
31st July In History
DID WE MISS SOMEONE?
CLICK HERE AND TELL US
WE'LL MAKE SURE
THEY'RE HERE A.S.A.P
Quick Facts

Indian Celebrities
Indian Men
Leo Writers
Male Writers
Male Novelists
Childhood & Early Life
Premchand was born as Dhanpat Rai Srivastav on 31 July 1880 in Lamhi, a village near Varanasi, in British India. His parents were Ajaib Rai, a post office clerk, and Anandi Devi, a homemaker. He was their fourth child.
He received his early education at a madrasa in Lalpur where he learned Urdu and Persian. He learned English at a missionary school later on.
His mother died when he was just eight years old and his father soon remarried. But he did not enjoy good relations with his step-mother, and felt very isolated and sad as a child. He sought solace in books and became an avid reader.
His father too died in 1897 and he had to discontinue his studies. 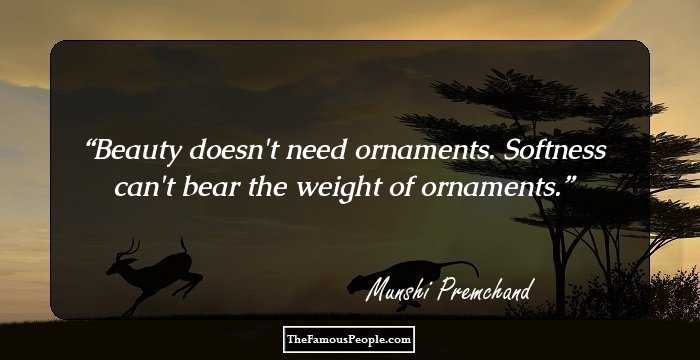 Quotes: Need
Continue Reading Below
Career
After struggling for a few years as a tuition teacher, Premchand was offered the post of an assistant teacher at the Government District School in Bahraich in 1900. At around this time he also started writing fiction.
Initially he adopted the pseudonym “Nawab Rai”, and wrote his first short novel, ‘Asrar e Ma'abid’ which explores corruption among temple priests and their sexual exploitation of poor women. The novel was published in a series in the Benares-based Urdu weekly ‘Awaz-e-Khalk’ from October 1903 to February 1905.
He shifted to Kanpur in 1905 and met Daya Narain Nigam, the editor of the magazine ‘Zamana’. He would write several articles and stories for the magazine in the coming years.
A patriot, he wrote many stories in Urdu encouraging the general public to participate in India’s struggle for freedom from British colonial rule. These stories were published in his first short story collection, titled ‘Soz-e-Watan’ in 1907. The collection came to the notice of the British officials who banned it. This also forced Dhanpat Rai to change his pen name from “Nawab Rai” to “Premchand” in order to escape persecution at the hands of the British.
By the mid-1910s he had become a prominent writer in Urdu and then he started writing in Hindi in 1914.
Premchand became the Assistant Master at the Normal High School, Gorakhpur, in 1916. He continued writing short stories and novellas, and published his first major Hindi novel ‘Seva Sadan’ in 1919. It was well received by the critics, and helped him gain wider recognition.
In 1921, he attended a meeting where Mahatma Gandhi urged people to resign from their government jobs as part of the non-cooperation movement. By this time Premchand was married with children, and had been promoted to Deputy Inspector of Schools. Yet he decided to quit his job in support of the movement.
After leaving his job he moved to Benares (Varanasi) and focused on his literary career. He established a printing press and publishing house called Saraswati Press in 1923, and published the novels ‘Nirmala’ (1925) and ‘Pratigya’ (1927). Both the novels dealt with women-centric social issues like dowry system and widow remarriage.
He launched a literary-political weekly magazine titled ‘Hans’ in 1930. The magazine aimed at inspiring Indians in their struggle for independence and was known for its politically provocative views. It failed to make a profit, forcing Premchand to look for a more stable job.
Continue Reading Below
He became a teacher in the Marwari College, Kanpur, in 1931. This job, however, did not last long and he had to leave because of differences with the college administration. He returned to Benares and became the editor of the ‘Maryada’ magazine and also briefly served as the headmaster of the Kashi Vidyapeeth.
Desperately seeking to revive his declining financial situation, he went to Mumbai in 1934 and accepted a script writing job for the production house Ajanta Cinetone. He wrote the script for the film ‘Mazdoor’ ("The Labourer") in which he also made a cameo appearance. The film, which depicted the miserable conditions of the labor class, incited the workers in many establishments to stand up against the owners and was thus banned.
The commercial environment of the Mumbai film industry did not suit him and he yearned to leave the place. The founder of Mumbai Talkies tried his best to convince him to stay, but Premchand had made up his mind.
He left Mumbai in April 1935 and moved to Benares where he published the short story ‘Kafan’ (1936) and the novel ‘Godaan’ (1936) which were among the last works he completed. 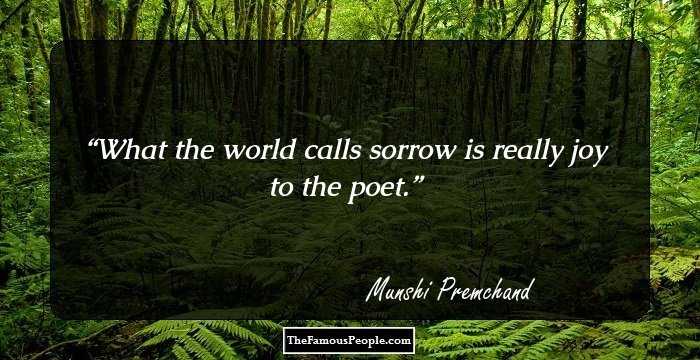 Major Works
His novel, ‘Godaan’, is considered one of the greatest Hindustani novels of modern Indian literature. The novel explores several themes such as caste segregation in India, exploitation of the lower classes, exploitation of women, and the problems posed by industrialization. The book was later translated into English and also made into a Hindi film in 1963.
Awards & Achievements
In 1936, a few months before his death, he was elected as the first President of the Progressive Writers' Association in Lucknow. 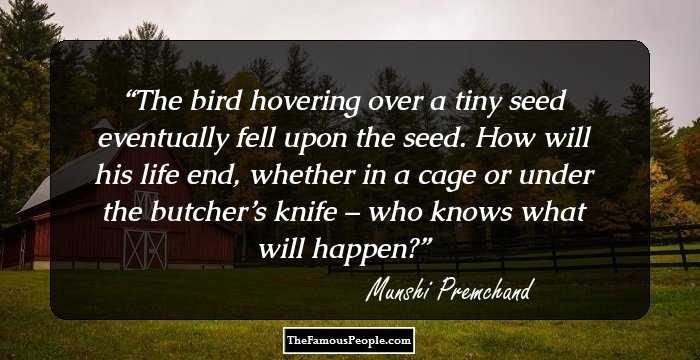 Quotes: Life, Will
Personal Life & Legacy
He was married to a girl selected by his grandfather in 1895. He was just 15 years old at that time and was still studying in school. He did not get along with his wife who he found to be quarrelsome. The marriage was very unhappy and his wife left him and went back to her father. Premchand made no attempts to bring her back.
He married a child widow, Shivarani Devi, in 1906. This step was considered revolutionary at time, and Premchand had to face a lot of opposition. This marriage proved to be a loving one and produced three children.
He suffered from ill health during his last days and died on 8 October 1936.
The Sahitya Akademi, India's National Academy of Letters, established the Premchand Fellowships in his honor in 2005. It is given to persons of eminence in the field of culture from SAARC countries.

See the events in life of Munshi Premchand in Chronological Order