Althea Gibson was born in a poor family, but her financial conditions didn’t deter her from excelling in the world of tennis. Despite being a person of black origin, she stood out as a role model for women and sportspersons of African-American origin all over the world. At a time when black sportspersons were still in the novices, she stormed the tennis world. She started playing at a tender age and continued to do so till the world was forced to accept her. She became the first tennis player hailing from the African-American community to win a ‘Grand Slam’ title. She has been touted as one of the greatest players by former tennis greats such as Robert Ryland and Billie Jean King. She battled apartheid her entire life and struggled to make a difference in such conditions. At one point of time, she even contemplated leaving amateur tennis and joining the US Army. However, she changed her decision after being nominated for the US peace delegation for Asian nations. The tour greatly boosted her morale and she went on to register her win in the ‘US Open’ and ‘Wimbledon’ tournaments. The country still coming to terms with bigotry, received her with open arms on her victory. She later became an inspiration for players like Venus and Serena Williams
Continue Reading Below

Cause of Death: Respiratory Infection

American Celebrities
Tennis Players
Black Sportspersons
Black Tennis Players
American Women
Childhood & Early Life
Born in Clarendon County, South Carolina, on August 25th 1927, to cotton farmers Daniel and Annie Bell Gibson, Althea was the eldest of all her siblings, which included three sisters and a brother, apart from her. The rest of her siblings were born in Harlem, a place where the family migrated when the great depression affected the rural farmers.
As a child, she often didn’t turn up at school, but developed a strong liking towards sports.
Her family resided close to the area which belonged to the ‘Police Athletic League’, and was meant for sport-related activities. This was where she learnt to play paddle tennis, and by 1939 she went on to win the New York City’s ‘Women Paddle Tennis championship’. 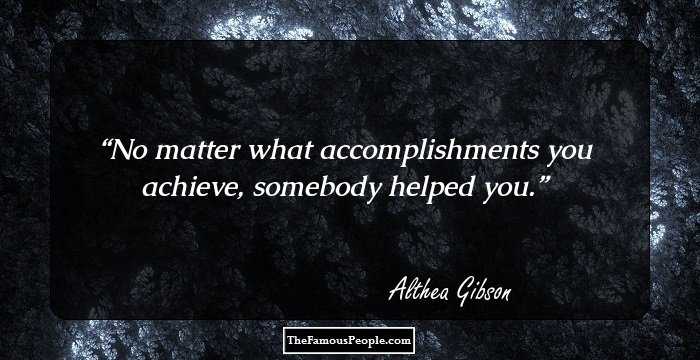 See the events in life of Althea Gibson in Chronological Order