(Best Known for His Poem ‘Howl’, Which is One of the Most Significant Products of the 'Beat Movement')

Allen Ginsberg was a poet, writer, and human rights activist who was a pivotal figure of the revolutionary Beat Generation. An outspoken individual, he voiced his views against capitalism, militarism, nuclear weapons, censorship, materialism, and sexual repression in his works. He openly advocated for homosexual rights and called for the peaceful coexistence of people having diverse views and opinions. The son of a poet and schoolteacher, he developed an early love for writing. He began publishing his poems while still in high school and received a scholarship to attend Columbia University. During this time, he became acquainted with several future writers including Jack Kerouac and William S. Burroughs, with who he would collaborate later. He moved to San Francisco and built a solid reputation as a poet representing the “new generation.” As a poet, he played a major role in popularizing the Beat Generation and is credited to have contributed to the development of an American vernacular in poetry. As an activist, he participated in decades of political protests. Born into a Jewish family, he later developed a fascination for Eastern religious disciplines and embraced Buddhism. He adopted a very simple lifestyle, living in modest apartments and purchasing things from second-hand stores. Art Garfunkel
3rd June In History
DID WE MISS SOMEONE?
CLICK HERE AND TELL US
WE'LL MAKE SURE
THEY'RE HERE A.S.A.P
Quick Facts

Irwin Allen Ginsberg was born on June 3, 1926, in Newark, New Jersey, US, to a Jewish family. His father, Louis Ginsberg, was a schoolteacher and occasional poet, and his mother, Naomi Levy, a Russian emigrant, was a Marxist.

He developed an interest in political issues as a young boy and began writing letters to The New York Times on issues like World War II and workers' rights when he was a teenager.

He graduated from Eastside High School in 1943 and joined Montclair State College. He left the college soon after and enrolled in Columbia University after getting a scholarship from the Young Men's Hebrew Association of Paterson.

He joined the Merchant Marine while still studying to earn money to fund his education. He contributed to the Columbia Review literary journal and served as president of the literary and debate group Philolexian Society.

Throughout his childhood and youth, he struggled to come to terms with his mother’s mental illness. She suffered from a psychological illness that often manifested as paranoid delusions. She was never properly diagnosed and was sent to a mental institution when her behavior became exceedingly erratic. 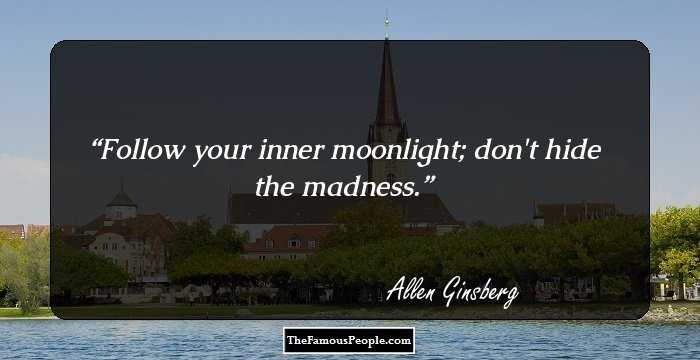 Continue Reading Below
The Beat Generation

The men bonded well and often talked about creating a “New Vision” for literature in America. Ginsberg also met Gregory Corso in the 1940s and was awestruck by his poems. He then introduced Corso to his inner circle and the men began to travel together, trying to bring their vision to fruition.

In the mid-1950s, Ginsberg and a few others moved to San Francisco. During this period, what became known as the “Beat Culture” came into being. The culture was popularized by a group of unconventional authors, including Ginsberg, who rejected the standard narrative values and instead explored various aspects of the counterculture in their writings.

In 1956, Allen Ginsberg published Howl, a poem in which he denounced the forces of capitalism and conformity which he believed were “destructive.” Along with Jack Kerouac's On the Road (1957) and William S. Burroughs' Naked Lunch (1959), Howl is among the best-known works of the Beat Generation.

Allen Ginsberg left San Francisco in 1957 and traveled to different parts of the world. He first went to Morocco and then to France. In Paris, he took up residence in a run-down hotel along with Peter Orlovsky and Gregory Corso. They were soon joined by their other writer friends. This hotel became known as the “Beat Hotel.”

The ensuing years marked a productive time for the writers of the Beat Generation. It was in the Beat Hotel that Ginsberg began working on his epic poem Kaddish.

Allen Ginsberg and Orlovsky traveled extensively across India in 1962-63. They spent considerable time in Calcutta and Benares. Throughout their stay, they befriended many young Bengali poets, including Shakti Chattopadhyay and Sunil Gangopadhyay.

Allen Ginsberg went to England in 1965 and was received well in the literary scene. His friend, the filmmaker Barbara Rubin, organized the International Poetry Incarnation at the Royal Albert Hall in London in June the same year. The event was a resounding success, attended by an audience of 7,000 people.

In the 1960s, he actively participated in the hippie culture, incorporating elements of the Beat culture into the hippie movement.

Besides writing, he also taught at Naropa University and Brooklyn College. 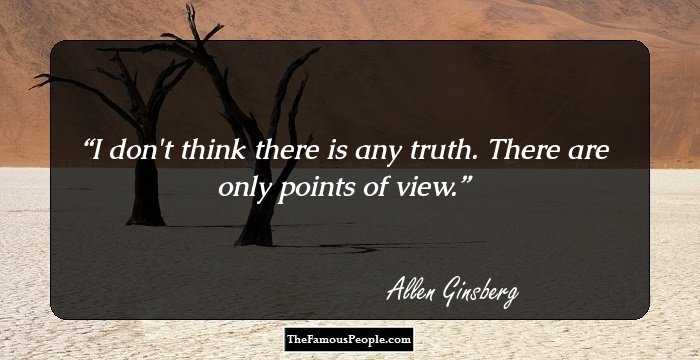 Allen Ginsberg used explicit sexual language in his works. This gained him both popularity and notoriety. He talked openly about homosexuality and advocated for sexual freedom for homosexual men. His works challenged the obscenity laws of his time and served as inspiration for other gay writers.

He signed the anti-war manifesto "A Call to Resist Illegitimate Authority" during the Vietnam War protests in 1967. The following year, he signed the "Writers and Editors War Tax Protest" pledge and sponsored the War Tax Resistance project.

He talked about drug use openly and was an advocate of marijuana legalization, even organizing the New York City chapter of LeMar (Legalize Marijuana). He was also actively involved in the demystification of LSD in the 1960s.

The poem Howl from Allen Ginsberg’s collection of poetry Howl and Other Poems is the best known among his works. It contains many sexual references, both heterosexual and homosexual. An embodiment of the 1950s counterculture, the poem is counted amongst the great works of American literature.

His poem book Kaddish and Other Poems 1958-1960 is another one of his major works. It contains the poem Kaddish, a poignant piece about his mother, Naomi, and her struggles with an undiagnosed mental illness. 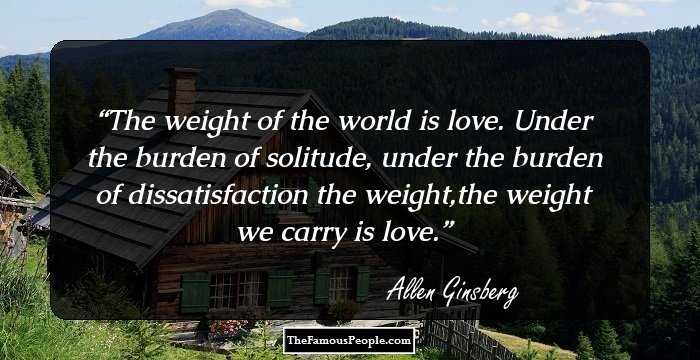 Allen Ginsberg had a deep interest in Eastern religious disciplines and practiced Buddhism. He was also involved with Krishnaism and incorporated chanting the Hare Krishna mantra into his spiritual practices. He led a simple lifestyle and was known to generously give away his money.

He was openly homosexual. He met poet Peter Orlovsky in 1954 and fell in love with him. The two men began a steady relationship that lasted till Ginsberg’s death.

He was a lifelong smoker and suffered from several health issues. He became ill with cancer in the mid-1990s and died on April 5, 1997, surrounded by his loved ones. He was 70 years old.

Quotes By Allen Ginsberg | Quote Of The Day | Top 100 Quotes

See the events in life of Allen Ginsberg in Chronological Order