Born in Russia, Alfred Rosenberg was one of the leading ideologists of the Nazi Party who played a decisive role in shaping the Nazi philosophy. He had a dominating and arrogant personality with a fierce hatred for the Jewish community. Despite being well educated in architecture and engineering with a doctorate degree, he became a racist and joined Hitler’s party when he immigrated to Germany after the 1917 Russian Revolution. He was one of the main promoters of key Nazi ideological beliefs such as, the racial theory, persecution of the Jews, abrogation of the Treaty of Versailles, and other such creeds. He also played an important role in the development of Positive Christianity, a movement within Nazi Germany which blended ideas of racial purity and Nazi ideology with elements of Christianity. He influenced Nazi thinking on a wide range of subjects from music to religion but ultimately was captured by Allied troops at the end of the Second World War. He was convicted of planning and encouraging dreadful crimes against humanity at the Nuremberg War Crimes Trial. Like many of his followers, he was convicted as a war criminal and was hanged.
Continue Reading Below German Celebrities
German Men
Male Criminals
German Criminals
Capricorn Criminals
Childhood & Early Life
He was born on January 12, 1893 in Reval, Governorate of Estonia, Russian Empire, to Waldemar Wilhelm Rosenberg, a shoemaker and wealthy merchant, and his wife, Elfriede.
His father was known to be half-Estonian and half-Latvian in origin while his mother was German with some French background, according to the newest research.
He excelled in his early education and graduated from the Petri-Realschule in Reval.
After schooling, he studied architecture at the Riga Polytechnical Institute where he joined a pro-German student group. He also studied engineering at Moscow's Highest Technical School and obtained his doctorate in 1917. 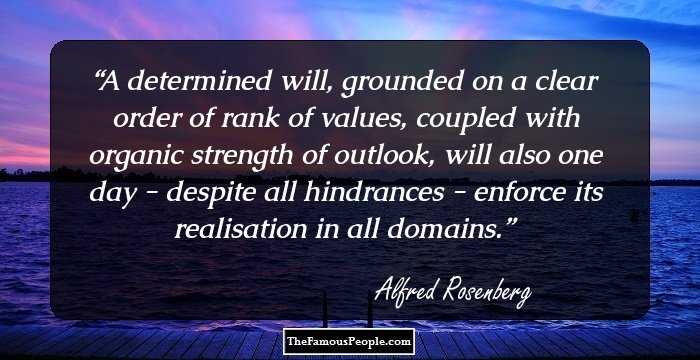 The Best Black Actresses Of All Time
Career
During the Russian Revolution of 1917, he and his family supported the counter-revolutionaries. But after they lost, he along with his family immigrated to Germany in 1918. Max Scheubner-Richter, the mentor behind his German ideology, also immigrated along with him to Munich.
After World War I, the anti-Semitic and anti-communist German Workers Party, better known as the Nazi Party, marked Munich as its center for revolutionizing the country. In 1919, Rosenberg became one of the earliest members of the party.
He also became a member of Thule Society and Aufbau Vereinigung, a Munich based counter-revolutionary conspiratorial group, whose members were involved in terrorist activities to overthrow the governments of Germany and the Soviet Union, replacing them with authoritarian regimes of the far right.
In 1923, he became one of the first editors of the ‘Völkischer Beobachter’ when it became the Nazi party newspaper. He published his philosophies and ideas in the newspaper and it soon became infamous for its poisonous anti-Semitic articles.
In 1923, after Hitler was imprisoned following the failure of ‘Beer Hall Putsch’—a failed attempt to seize power in Munich—he appointed Rosenberg as the leader of the National Socialist movement, a position he held until Hitler’s release.
In 1929, Rosenberg founded the ‘Militant League for German Culture’ to make a significant imprint on cultural life in Germany based on the aims and objectives of the inner circles of the Nazi Party.
In 1930, he was appointed as a Reichstag Deputy. Subsequently, he published his book on racial theory, ‘The Myth of the Twentieth Century’, which deals with key issues in the national socialist ideology such as attacking Jewish influence in German culture.
In November 1932, he participated in the Volta Conference held in Rome. The following year, he was named leader of the Nazi Party's foreign political office by Hitler.
In January 1934, Hitler appointed him as the spiritual and philosophical teacher of the Party and all related organizations. Rosenberg was also appointed the Nazi Party’s chief racial theorist and oversaw the construction of a human racial "ladder" which regarded Nordics as the "master race", superior to all others.
Continue Reading Below
In 1940, Rosenberg was elected as the head of the Hohe Schule, a kind of academy for party officials, the Centre of National Socialist Ideological and Educational Research.
When the German forces invaded the USSR, he was appointed the head of the Reich Ministry for the Occupied Eastern Territories. During the war, he advocated a policy designed to encourage anti-Communist opinion among the population of the occupied territories.
After the war, Rosenberg was captured by Allied troops and was presented for trials at Nuremberg for his heinous acts of crime.
He was found guilty of committing crimes against peace and crimes against humanity. He was also accused of planning, initiating and waging wars of aggression and was charged of being a war criminal.
He was sentenced to death, at the Nuremberg trials, for his monstrous act of planning to murder thousands of innocent people. 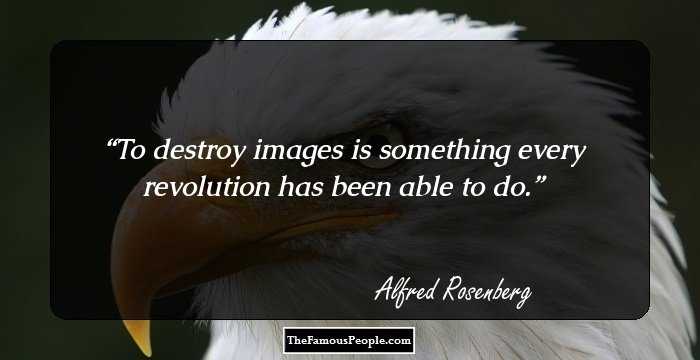 Personal Life & Legacy
In 1915, he married Hilda Leesmann, an ethnic Estonian. But, they got divorced in 1923.
In 1925, he married Hedwig Kramer. They were blessed with two children; a son, who died in infancy, and a daughter, Irene, who was born in 1930. Their marriage lasted until his execution.
He considered those Germans impure who did not marry Germans as they have violated the purity of German blood ancestry by diluting it with the blood of non-German people.
He was accused of being a war criminal and was executed at Nuremberg on the morning of October 16, 1946.
Recommended Lists:
Criminals #382
You May Like

See the events in life of Alfred Rosenberg in Chronological Order