Stanley Baldwin, 1st Earl Baldwin of Bewdley, KG PC FRS was a British Conservative Politician who served as the Prime Minister three times between 1923 and 1937. He headed the government between the two world wars, during the General Strike of 1926 and the abdication crisis of 1936. Baldwin hailed from a family of wealthy industrialists and he helped his father create what was one of Britain’s largest iron and steel firms, Baldwins Ltd. His mother’s family had artistic and literary interests and she was the first cousin of the writer and poet Rudyard Kipling. Baldwin didn’t possess any political cunning but he made up for it through his values of probity, charity and conciliation, which easily struck chords with the British public. The image that he has left behind is that of an avuncular figure and the epitome of British middle-class moderation against a turbulent and menacing European world. He wasn’t designated or popular as a great thinker as he had to share the stage with the likes of Lloyd George, Winston Churchill and Neville Chamberlain, but he was adept in acting decisively like in the passing of the 1936 Public Order Act
Continue Reading Below British Celebrities
British Men
Trinity College, Cambridge
Leo Leaders
Male Leaders
Childhood & Early Life
Stanley Baldwin was born on August 3, 1867 in Worcestershire, England, to Alfred Baldwin and Louisa Baldwin. His family owned iron and steel making business.
He received his schooling from St. Michael’s and the Harrow School and then went onto the Trinity College, University of Cambridge to study history. He was in the college’s debate team (Magpie & Stup), but was asked to resign as he never spoke up and he returned home with a third-class degree.
At home he began helping in the family business and then attended Mason College (now University of Birmingham) for a while.
He was a Second Lieutenant at Malvern’s Artillery Volunteers in his teens and in 1897 he became Worcestershire County’s Justice of the Peace. 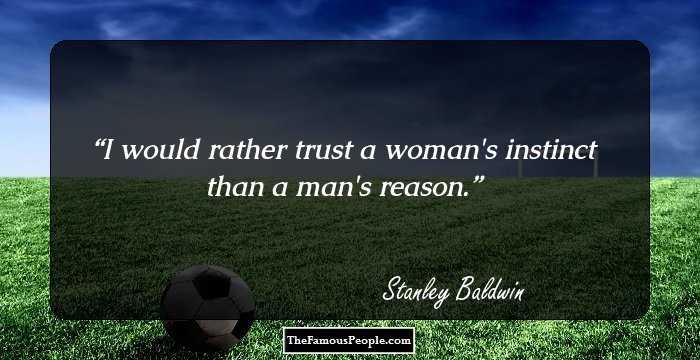 Famous Beautiful Women With Green Eyes
Career
In 1908, Stanley Baldwin was elected as the Conservative Member of Parliament (MP) for Bewdley, a post previously held by his father.
He became the Parliamentary Private Secretary to the party leader Andrew Bonar Law during the First World War and in 1917 he was named the Financial Secretary to the Treasury. In this position he did tremendous work to arrange funds for repaying UK’s war debt.
In the 1920 Birthday Honors he was elevated to the Privy Council and a year later he was promoted to the Cabinet as President of the Board of Trade.
At a meeting of Conservative MPs Stanley Baldwin expressed his views that the party’s coalition with Liberal David George was bringing nothing but bad news for the party and soon the coalition was broken. The Conservative party, now in dearth of Cabinet ministers, promoted Baldwin to the Chancellor of the Exchequer.
The Conservative Party won the 1922 general elections and Andrew Law became the Prime Minister, but within a year he was diagnosed with terminal cancer and he retired. The two available options to succeed Law were Lord Curzon and Stanley Baldwin, a choice that fell upon King George V, who chose Baldwin
Stanley Baldwin became the Prime Minister for the first time in 1923 and called a general election to seek approval and support for the government’s plans to introduce protective tariffs and trade protection in order to reduce unemployment. He failed to retain a majority and Ramsay Macdonald’s first labor government came to power.
For the next 10 months, Baldwin supported MacDonald’s government on a couple of issues, but decided to vote against them over the Russian treaties. In the 1924 general elections the Conservatives won with a huge majority and Baldwin became the Prime Minister again.
In order to find a solution to the nation-wide problem of electricity he created a committee which was headed by Lord Weir. The remedy provided was the creation of the Central Electricity Board, which successfully increased the output and number of consumers and decreased the generating costs.
During his term, came the Widows, Orphans and Old Age Contributory Pensions Act of 1925. The act provided a pension of 10 shillings a week for widows, and more if they had children, and 10 shillings a week for insured workers and their wives at 65 years of age.
Continue Reading Below
Under his tenure the government even endured the General Strike of 1926 which created pandemonium in the UK. A year later he passed the Trade Disputes Act which made general strikes illegal.
The 1929 general elections were won by the Labor party and Baldwin endured a severe party crisis, with attempts to force his resignation as party leader. In 1931 he returned to the government as a member of Ramsey’s National Coalition and in 1935 he became the PM again when Ramsey resigned.
In 1936 King Edward VIII expressed his wish to marry the divorcee Wallis Simpson. This was unacceptable to the royal family and the king was given the choice of renouncing her or abdicating the throne. He chose to abdicate in December 1936. Baldwin’s management of this abdication crisis was highly praised and he regained his popularity.
King Edward VIII was succeeded by his brother, George VI and after his coronation Baldwin announced his retirement. His last act was raising the salaries of MPs and also giving the leader of opposition a salary. 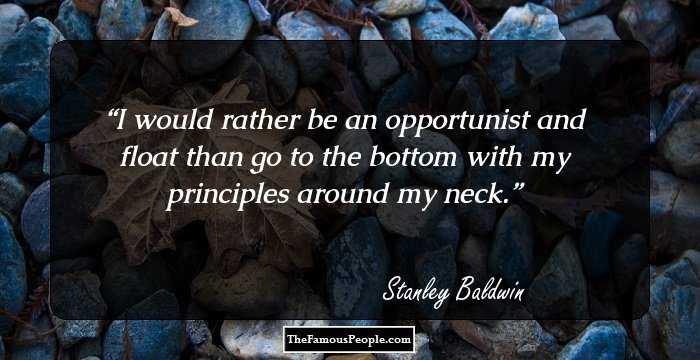 Quotes: I
Major Works
Stanley Baldwin’s political career had several highlights. He was given credit for sustaining the government peacefully and successfully through the turbulent times of the 1926 General Strike and a year later when the government passed the 1927 Trades Disputes Act to restrict the interference of the power unions.
The work that let him bid a happy adieu was the successful abdication of King Edward. The king wished to marry Wallis Simpson, a woman thoroughly despised by Baldwin and distrusted by the government. Even the citizens wouldn’t have tolerated a 2-time divorced woman as their queen. Baldwin understood the dicey equation and asked the king to chose the path that would rebuild the constitutional integrity and love for the king or quit the throne altogether. This bold and outright proclamation raised the status of Baldwin amongst the citizens.
Awards & Achievements
After retirement, Stanley Baldwin was created Earl Baldwin of Bewdley and Viscount Corvedale, of Corvedale in the county of Shropshire and was created a Knight of the Garter (KG). 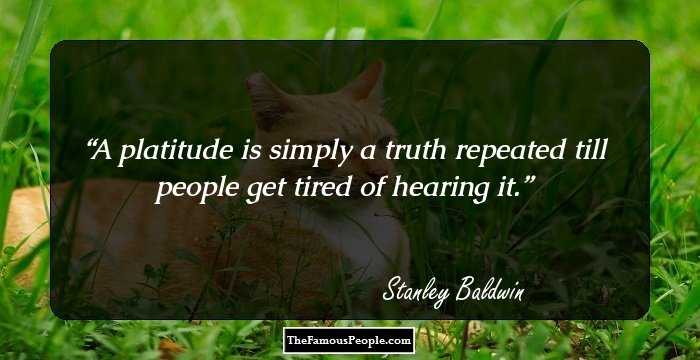 Personal Life & Legacy
Stanley Baldwin married Lucy Ridsdale on September 12, 1892 and together they had six children, Diana Lucy, Leonara Stanley, Pamela Margaret, Oliver Ridsdale, Esthera Louisa and Arthur Windham.
He passed away in his sleep at Astley Hall in Worcestershire on December 14, 1947 and was cremated at the Golders Green Crematorium.
You May Like

See the events in life of Stanley Baldwin in Chronological Order