Advanced Search
An acclaimed novelist, Afghan-born Khaled Hosseini brought to American literature a worldly respective that drew from the experiences of himself and his family. Though he admitted to feeling like a "tourist in his own country" when he had finally returned to his native nation at the wiser age of 38 - having left when only 11 - Hosseini's memories of those younger years were obviously deep and profound, seminal enough to connect with a wide American audience that allowed his first novel, 'The Kite Runner', to sit on the New York Times Best Seller list for 101 weeks. Hosseini's following two novels, 'A Thousand Splendid Suns' and 'And The Mountains Echoed' were also met with success. And while these novels gave him great acclaim, Hosseini's own story brought a deserved attention, the author having been a practicing physician in California before releasing ‘The Kite Runner’ and becoming a full-time writer. His works are deeply entrenched in his own experiences and present to the world the grim realities of the Afghan culture and the sufferings of his own countrymen. To know more about the works and achievements of the doctor turned writer, read the following biography. American People
American Men
Male Writers
Pisces Writers
Male Novelists
Childhood & Early Life
Khlaed Hosseini grew up in Kabul the oldest of the five children born to his father, Nasser, who worked as a diplomat in Afghanistan's Ministry of Foreign Affairs. Hosseini's mother worked at an all-girls high school teaching the Persian language.
With their careers, Hosseini's parents afforded the boy a life of privilege, living in the middle class neighborhood of Wazir Akbar Khan - one of the wealthiest parts of Kabul and where the American embassy is located. Nasser moved Khaled and his family to Paris in 1976 after securing a job in the city.
When the Soviets invaded Afghanistan in 1980, the Hosseini family secured political asylum in the United States and moved to San Jose, California. Hosseini studied biology at ‘Santa Clara University’ and earned a bachelor's degree from the school eight years later. 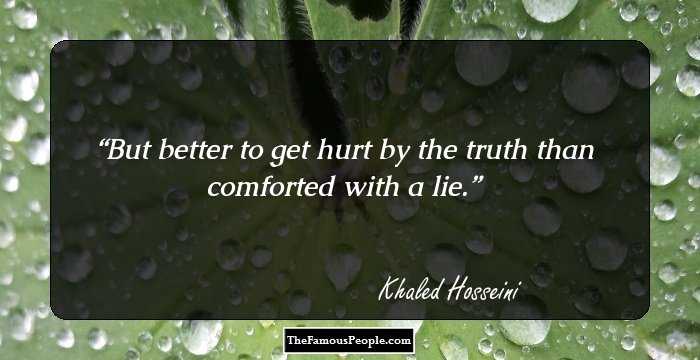 Continue Reading Below
Career
In 1999, he attended the ‘School of Medicine’ at the ‘University of California’, San Diego. There he earned his M.D. in four years. It was at the ‘Cedars-Sinai Medical Center’ where Hosseini began and completed his residency in internal medicine, continuing on to practice for over 10 years.
While practicing medicine, Hosseini wrote his first novel, 'The Kite Runner,' which told the tale of a young boy dealing with a traumatic youth and a distant father spanning the distance from Afghanistan to California.
Hosseini gave up his medical practice a year and a half after releasing the novel and began work on a second, becoming a full time writer.
A Thousand Splendid Suns,' published in 2007 covered a greater expanse - both literal and figurative - to the story told in 'The Kite Runner,' covering over fifty years of time and the lives of two characters. As the protagonists were women, this novel presented a more feminine perspective, and highlighted the discrimination pervading in Afghan culture.
The Kite Runner' was adapted into a film in 2007, directed by Marc Forster - Monster's Ball, Finding Neverland, Quantam of Solace. Hosseini made a cameo appearance in the film.
He released his third novel, 'And the Mountains Echoed,' on May 21, 2013. The book covered larger ground, telling a multi-generational story of family, sacrifice, love, betrayal and honor. Reaching great success, over three million copies of the novel have been sold. 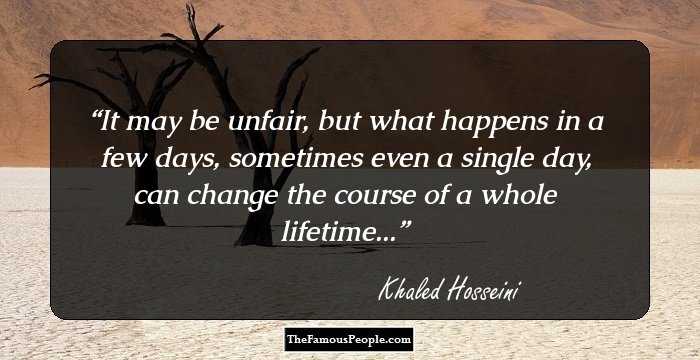 Quotes: Change
Major Works
The Kite Runner' was released in 2003 to great acclaim and popularity. It sat at first on the New York Times Best Seller list for 4 weeks and was adapted into a hit Hollywood film making almost quadruple its filming budget.
Awards & Achievements
He was awarded the ‘South African Boeke Prize’ for his first book 'The Kite Runner' in 2004.
The Kite Runner' was named as ’Penguin Reading Group Book of the Year’ in 2006 and again the next year. 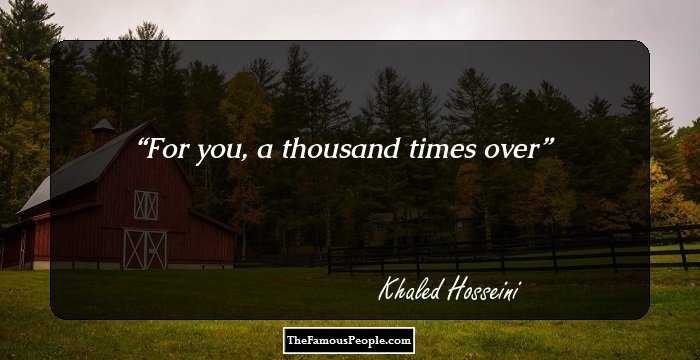 Quotes: You
Personal Life & Legacy
Khaled Hosseini is married to Roya, with whom he has had two children named Farah and Haris. The family lives together in Northern California.
He has founded the ‘Khaled Hosseini Foundation’ to assist Afghan children and refugees.
His books have sold over thirty eight million copies of his novels in over seventy countries.
Trivia
While in third grade, this famous author taught his family's servant how to read and he greatly appreciated the poetic work of Sufis while a youth.
The famous personality’s favorite book is the ‘Divan-e-Hafez’, a collection of poems by Hafez.

Quotes By Khaled Hosseini | Quote Of The Day | Top 100 Quotes

See the events in life of Khaled Hosseini in Chronological Order