Zora Neale Hurston was a well-known American folklorist, anthropologist and author. Born in Alabama, she wrote plays, short stories and essays apart from novels, during the Harlem Renaissance period. She spent some time collecting folklore and stories from Latin America, the Caribbean and the South, and brought them out in her book ‘Mules and Men’. This way she recorded tales of various traditions, including the African-American culture that she herself belonged to. Her illustrious career spanned over a period of thirty years. Starting her life with a peaceful childhood, Hurston soon had to face the hardships of life with her mother’s early death. She displayed the knack of winning people’s hearts with her keen sense of humour and her great intellect. Though very social, the novelist was equally dedicated to her work. At times, she would retire to her bedroom to write in private, even when parties were in full swing in the living room. Despite gaining appreciation as a promising writer of the Harlem Renaissance, poverty kept chasing her and even in her last days she had to take up menial jobs. She breathed her last in Florida, and was buried in an unmarked grave. The famous writer Alice Walker located this eminent folklorist’s grave, and marked it with a headstone. MacKenzie Scott
Anthropologists #2
Novelists #136
Writers #460
DID WE MISS SOMEONE?
CLICK HERE AND TELL US
WE'LL MAKE SURE
THEY'RE HERE A.S.A.P
Quick Facts

American Celebrities
African American Women
African American Authors
Novelists
Black Writers
Childhood & Early Life
Zora Neale Hurston was born on January 7, 1891, in Notasulga, to John Hurston and Lucy Potts Hurston. She was their fifth child, and had she seven siblings.
She was brought up entirely in Eatonville in Florida. When her mother died in 1904, her happy childhood came to a hurried end, and her father remarried.
She left home and took up basic jobs and strived to complete her schooling. She reached Baltimore in 1917, and studied in Morgan Academy to finish her high school education.
In 1918, Zora Neale Hurston started attending Howard University in Washington D.C and obtained an associate degree in 1920. 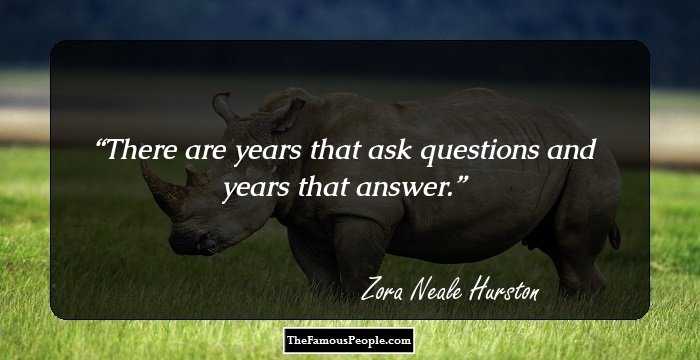 Famous Beautiful Women With Green Eyes
Career
She came out with her very first story ‘John Redding Goes to Sea’ in the magazine of the campus literary society, in 1921.
In December 1924, she published a short story titled, ’Drenched in Light’ in the magazine, ‘Opportunity’.
Between 1925 and 1927, she studied anthropology with Franz Boas in Barnard College.
With Langston Hughes and Wallace Thurman, she came up with a literary magazine called ‘Fire!!’ in 1926. However, they did not publish more than one issue.
Hurston wrote a number of short stories and articles for many magazines like ‘Opportunity’ and ‘The Negro Digest’. In February 1927, she collected folklore by travelling to Florida. She received a Bachelor of Anthropology degree from Barnard, the same year.
In 1932, she collaborated with the creative literature department of Rollins College in Florida and produced a concert of Negro music.
In January 1935, she began her work for a Ph.D. in anthropology at Columbia University. For this, she earned a fellowship from Rosenwald Foundation. She also won a Guggenheim Fellowship in 1937 to conduct research on ethnography in Jamaica and Haiti.
This folklorist wrote her greatest work ‘Their Eyes Were Watching God’ in 1937, when she was in Haiti. She later joined Paramount Pictures as a story consultant.
Throughout the 1940s, she kept publishing her works in some of the prominent journals like ‘The American Mercury’ and ‘The Saturday Evening Post’.
Continue Reading Below
In June 1956, she worked as a librarian at Patrick Air Force Base in Florida. A couple of years later, she took up a job as a substitute teacher at Lincoln Park Academy, Fort Pierce. 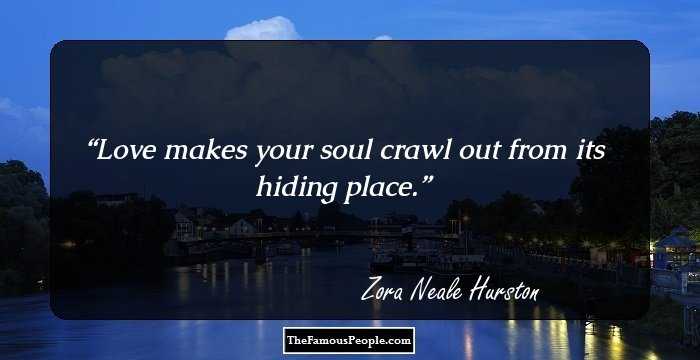 Quotes: Love, Soul
Major Works
In 1935, this accomplished writer published ‘Mules and Men’ which was a collection of African American folk tales. It is regarded as one of the best works on folklore and culture of the blacks.
In September 1937, Zora Neale Hurston published her greatest work ‘Their Eyes Were Watching God’. Though it was not received well in the beginning, the novel was subsequently appreciated in the 1970s and 1980s. It has been included in the list of 100 best English-language novels published since 1923, by the magazine, ‘Time’.
She also came out with an autobiography titled ‘Dust Tracks on a Road’ in 1942, which was much appreciated for its literary content by critics.
Awards & Achievements
In 1925, Hurston entered the literary contest of the magazine ‘Opportunity’. She won the second-place for both the story, ‘Spunk’ and the play, ‘Color Struck’.
In June 1939, she was awarded an honorary degree of Doctor of Letters from Morgan State College.
For her autobiography, she won the Anisfield-Wolf Book Award in Race Relations, in 1943. The same year she also became the recipient of Howard University's Distinguished Alumni Award. 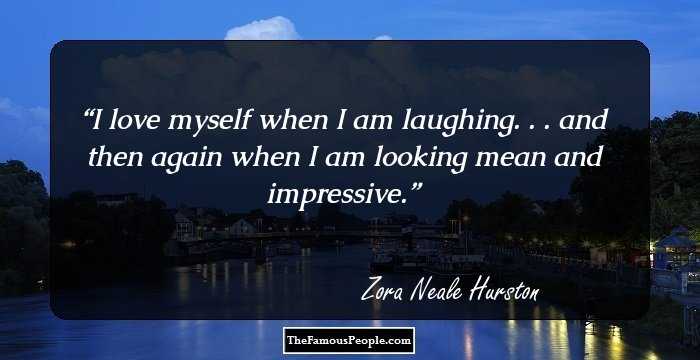 Quotes: Love, I
Personal Life & Legacy
Zora Neale Hurston first married Herbert Sheen, whom she divorced in 1931. Her second marriage was to Albert Prince, a man 25 years her junior, in 1939. This marriage lasted only seven months before ending.
In 1948, this talented anthropologist was falsely accused of molesting a ten-year-old boy. However, she was acquitted later.
Early in 1959, she suffered a stroke, and entered the St. Lucie County Welfare Home. She suffered from hypertensive heart disease and breathed her last in the same institution on January 28, 1960.
Trivia
This eminent writer had to give her year of birth as 1901, ten years later than her actual year of birth, to be eligible for free public schooling.
This American folklorist grew up in a rural community for blacks, the first of its kind in the nation, established in the year 1887.
Recommended Lists:
Intellectuals & Academics #70
You May Like