Carlos Castaneda was an American author who penned the famous nonfiction book, ‘The Teachings of Don Juan’. Deemed by Times magazine as the ‘Godfather of the New Age’, Castaneda through his best-selling nonfiction books, brought forth to readers the mystical teachings of Don Juan Matus, a Yaqui Indian shaman from Mexico. Castaneda’s first acquaintance with Don Juan dates back to his years in University of California, Los Angeles (UCLA), where he studied as a graduate student. It was for one of the assignments wherein he had to interview an Indian that Castaneda first chanced upon Don Juan. His internship under the tutelage of the latter led his exploits into the non-ordinary reality. He started to believe that he was ‘the chosen one’ picked to receive the training for becoming a full-fledged sorcerer. Castaneda wrote down about his training under Don Juan in the book, ‘The Teachings of Don Juan: A Yaqui Way of Knowledge’. In his lifetime, he penned 12 books, two of which were published posthumously. Interestingly his books received much critical acclaim to make him a world–renowned author. It was only later that critics doubted the authenticity of his work and labelled them under fiction Shonda Rhimes
Anthropologists #33
Writers #1053
Intellectuals & Academics #522
DID WE MISS SOMEONE?
CLICK HERE AND TELL US
WE'LL MAKE SURE
THEY'RE HERE A.S.A.P
Quick Facts

American Celebrities
Anthropologists
American Men
University Of California, Los Angeles
Male Writers
Childhood & Early Life
Carlos Castaneda was born on December 25, 1925 in Cajamarca, Peru.
He moved to United States in 1951 with an aim to become a sculptor. He studied at the School of Fine Arts in Lima. To meet his expenses, he took up odd jobs.
In addition to his training at the School of Fine Arts, he took classes at Los Angeles Community Center in philosophy, literature and creative writing. In 1957, he became a naturalized citizen of the USA.
Upon completing his elementary education, he enrolled at the University of California, Los Angeles for a Bachelor degree in Arts. Graduating in 1962, he took to studying anthropology. He attained a doctorate degree in the subject in 1973. 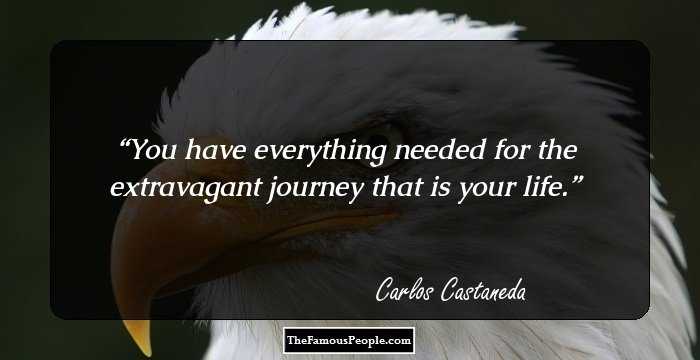 The Sexiest Men Of 2020, Ranked
Career
While studying at the University of California, Castaneda interviewed and interned under Don Juan Matus, a Yaqui sorcerer. Castaneda was strongly influenced by Don Juan.
It was under the tutelage of Don Juan that Castaneda acquired the position of ‘nagual’, leader of a party of seers.
Based on the meetings with Don Juan, Castaneda penned three books, ‘The Teaching of Don Juan: A Yaqui Way of Knowledge’, ‘A Separate Reality’ and ‘Journey to Ixtlan’, all of which were basically research log describing his apprenticeship with Don Juan. The books introduced to the world new concept of being inaccessible, erasing personal history and stopping the world.
In his fourth book, ‘Tales of Power’ which released in 1974, he published the end of his training under Don Juan. The book shows how Castaneda’s affirms his deep-seated will to become a full-fledged sorcerer by jumping into the abyss upon the instruction of his trainer. He penned eight more books of which six were published in his lifetime and two posthumously.
Castaneda’s books were highly lauded and praised by the world over so much so that he became one of the best-selling nonfiction authors in the country. Readers were captivated by the sense of mysticism which dominated in his books. Interestingly, he received renowned fame within the sorcerer community and psychedelic counterculture as well.
The worldwide approval and acceptance that his books enjoyed in the initial years did not last long. This unchallenged status ended when Time published a cover story on Castaneda which revealed his extensive lies about his past. Scepticism regarding his work soon followed and some critics tagged his work as hoax and listed them as works of fiction.
Castaneda retired from public view only to return in 1990s to promote Tensegrity, a group of movements which involve positions of body and breath and are said to be developed by indigenous people of Americas. He set up a corporation, ‘Cleargreen’, to promote Tensegrity by organizing seminars and workshops. Until Castaneda’s death, Cleargreen published three videos of the movement. 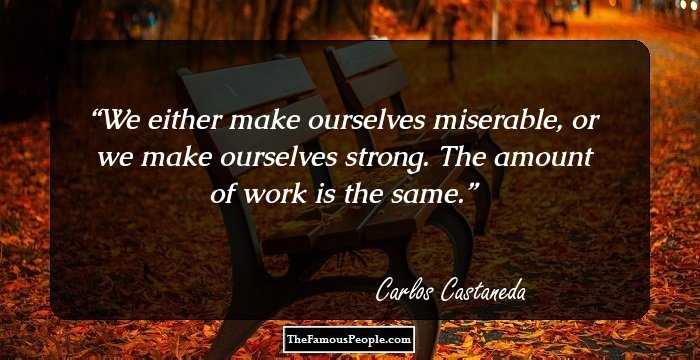 Major Works
Castaneda’s greatest work has been his inaugural book, ‘The Teachings of Don Juan’. The book is written in first person and puts forward dialogues exchanged between Juan and himself. Awards & Achievements
His 12 books have sold more than 28 million copies in 17 languages. Interestingly, despite being decades old, none of his books have ever gone out of print which itself says much about the author’s achievement.
Personal Life & Legacy
Information regarding Castaneda’s marriage is highly disputed. While some believe that he was married to Margaret Runyan in 1960 in Mexico, his death certificate lists him as a bachelor. Adding more to the confusion is the birth certificate of Runyan’s son wherein Castaneda is listed as the child’s father.
Whether Castaneda and Runyan’s marriage hit the rocks or sailed through is also a matter of contention. While some say they separated in 1960 or 1973, others believe that they were never divorced.
In 1973, he purchased a compound in Westwood wherein a group of his female companions resided. Following the philosophy of ‘erasing personal history’, they took new names. Regina Thal became Florinda Donner-Grau, Maryann Simko became Taisha Abelar, Kathleen Pohlman became Carol Tiggs and Patricia Partin became Blue Scout.
Castaneda breathed his last on April 27, 1998, in Los Angeles from complications arising out of hepatocellular cancer. He was cremated in Culver City Mortuary. Later, his ashes were sent to Mexico.
Strangely, Castaneda’s death was a hushed affair. People across the world weren’t aware of the writer’s death for about two months until the publication of an obituary by J.R. Moehringer in Los Angeles Times titled, ‘A Hushed Death for Mystic Author Carlos Castaneda. 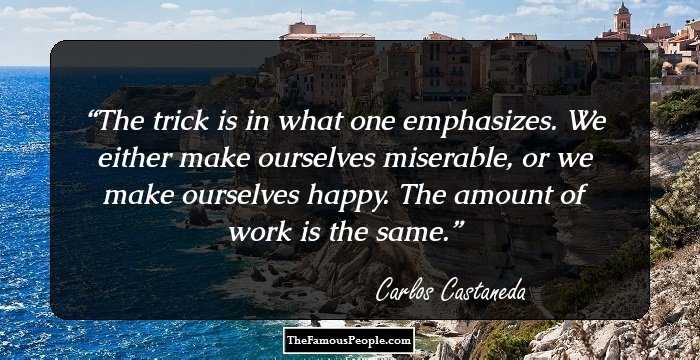 Quotes By Carlos Castaneda | Quote Of The Day | Top 100 Quotes

See the events in life of Carlos Castaneda in Chronological Order