Famous as the ‘the Father of Modern Anthropology’, Franz Boas was an important figure in 20thy century anthropology. He played a key role in organising the American Anthropological Association and made contributions in the field of physical anthropology, linguistics, archaeology, as well as cultural anthropology. He argued against the theories that distinguished people on the basis of race and discredited the belief that western civilisation is superior to the other societies. He was also a prolific writer; some of his well-known books in the field of anthropology include ‘The Mind of Primitive Man’, ’Anthropology and Modern Life’ and ‘Kwakiutl Ethnography’. Throughout his life he spoke out against racism and advocated the need for intellectual freedom and worked to protect German and Austrian scientists who fled from the Nazi regime. He was responsible for establishing folklore as a field of study in anthropology and also made a major contribution to the field of linguistics. To him goes the credit of establishing it as a science in America. He continues to influence many scholars and researchers in all the fields of anthropology.
Continue Reading Below American Celebrities
American Anthropologists
American Intellectuals & Academics
Cancer Men
Childhood & Early Life
Franz Uri Boas was born in Minden, Westphalia, Germany, into a Jewish family. His parents were well-educated, liberal and socialized among the elite members of German society.
From an early age, his parents encouraged him to think independently and pursue his interests.
He exhibited a keen interest in nature and natural sciences from the age of 5 and studied natural history and the geographic distribution of planets at school.
He attended the University of Heidelberg for a brief period of time after which he attended the University of Kiel, where he earned a Ph.D. in Physics and a minor in Geography. 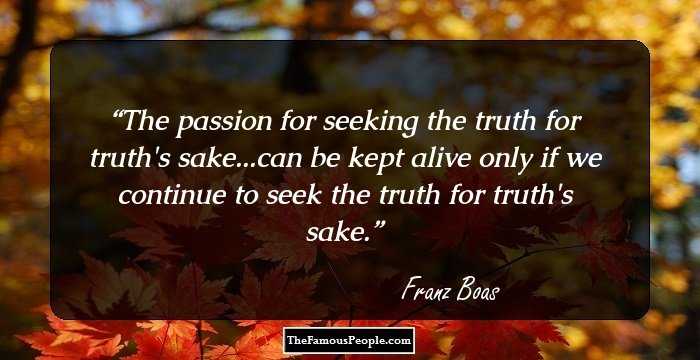 The Hottest Male Celebrities With The Best Abs
Career
In 1883, he went on a scientific mission to Baffin Islands, Canada, where he studied the ‘Inuit’ culture, collected ethnographic data and became interested in life of the people on the island.
In 1885, he worked with Rudolf Virchow (physical anthropologist) and Adolf Bastian (ethnologist) at the Royal Ethnological Museum, Berlin and also taught geography at the University of Berlin.
In 1887, he went to New York City and took up the post of an assistant editor for a ‘Science’ magazine and also taught anthropology at the Clark University, in Worcester, Massachusetts.
In 1888, his first monograph ‘The Central Eskimo’, an account of the ‘domestic occupation and amusements’ of the people in Baffin Islands, was published in the 6th Annual Report in the Bureau of American Ethnology.
In 1889, he was appointed as the head of the Department of Anthropology at Clark University, after which he went on a series of scientific expeditions to illuminate ‘Asaistic-American relations’.
In 1892, he resigned from his post at Clark University on the grounds of alleged ‘infringement on academic freedom’ and worked as the chief assistant in anthropology to F.W. Putnam at the Chicago World’s Fair.
In 1896, he worked under the guidance of F.W Putnam as an assistant curator at the American Museum of Natural History. That year, he also gave lectures on anthropology at Columbia University.
In 1897, he argued that the ‘Kwakiutl’, a tribe of the indigenous people centred in British Columbia, were learning about ‘matrilineal cultures’ from their neighbours in the northern region of Columbia.
In 1899, he was promoted to the post of professor of anthropology at the Columbia University and was appointed as the head of the Ph.D. program in anthropology.
Continue Reading Below
He organised the ‘Jesup North Pacific Expedition’, a five year study of the native people from the Pacific Northwest.
In order to extend his theories on the ‘Kwakiutl’, he invited fourteen Kwakiutl tribals to come and live in a mock village in order to study their culture and observe their behaviour.
In 1903, he authored the essay ‘Decorative Designs of Alaskan Needlecases: A History of Conventional Designs, Based on Materials in a U.S. Museum’, which served as an example of how he used empirical data and research methods to formulate his theories on anthropological studies.
In 1907, he authored an essay titled ‘Anthropology’, in which he highlighted the issues of ‘Why are the tribes and nations of the world different, and how have the present differences developed?’
In 1908, he became the editor of ‘Journal of American Folklore’ and became the most influential figure in the establishment of folklore as a discipline of study in the field of anthropology in America.
In 1911, ‘The Mind of Primitive Man’, a collection of his lectures on culture and race, was published. The publication was a reflection of his thoughts on ‘cultural relativism’.
Major Work
His 1911 publication ‘The Mind of Primitive Man’ is one of his seminal works which is considered an important work in cultural anthropology and cultural relativism. This book laid the foundation for further studies on anthropology and is used for academic purposes.
Awards & Achievements
In 1900, he was elected to the National Academy of Sciences, United States.
In 1901, he was appointed as the honorary Philologist of the Bureau of American Ethnology.
In 1910, he was elected as the President of the International Journal of American Linguistics.
In 1931, he was elected as the president of the American Association for the Advancement of Science.
In 1936, he was honoured as the ‘emeritus in residence’ at Columbia University, New York.
Personal Life & Legacy
In 1887, he married Marie Krackowizer in New York. The couple had six children together.
He died at the age of 84 after he suffered a major stroke at the Columbia University Faculty Club, New York.
You May Like

See the events in life of Franz Boas in Chronological Order