Born In: Philadelphia, Pennsylvania, US

Margaret Mead was an American anthropologist known for her studies and works on cultural anthropology. She was a religious and feminist woman with a curiosity about human activities and the cause of their actions. As a child, she developed a keen interest in human behavior. She was greatly influenced by her grandmother, who was a child psychologist and taught her to watch the behavior of the younger children to figure out the reasons behind their actions. Margaret was a well-educated and skilled woman with a clear understanding of her field of research. Her primary focus was to explore the human nature and the factors which influenced the actions of humans. She contributed significantly to the development of psychoanalytic theory by emphasizing the importance of culture in personality development. She proposed a theory about the evolution of human beings which she felt was directly related to their social and cultural backgrounds.

Born In: Philadelphia, Pennsylvania, US

Carlos Castaneda
Anthropologists #3
Intellectuals & Academics #75
DID WE MISS SOMEONE?
CLICK HERE AND TELL US
WE'LL MAKE SURE
THEY'RE HERE A.S.A.P
Quick Facts

American Celebrities
American Women
DePauw University
Columbia University
Women Anthropologists
Childhood & Early Life
She was born on December 16, 1901 in Philadelphia, Pennsylvania to Edward Sherwood Mead, a professor and Emily Fogg Mead, a sociologist. She was the eldest of the five Mead children—four sisters and a brother.
Her grandmother, a child psychologist, played a significant role in her upbringing. She encouraged her to observe children’s behavior and study the cause of their actions from an early age.
Most of her schooling was done at home because of the family’s frequent movements from one place to another. She had a total of six years of formal schooling but most of her knowledge came from her family members.
In 1919, she joined the DePauw University, studied there for a year and then transferred to Barnard College from where she graduated in 1923.
In 1924, she earned her master’s degree from Columbia University after studying with Franz Boas and Dr. Ruth Benedict. In 1925, she went for an expedition to Samoa. She received her Ph. D. from Columbia University in 1929. 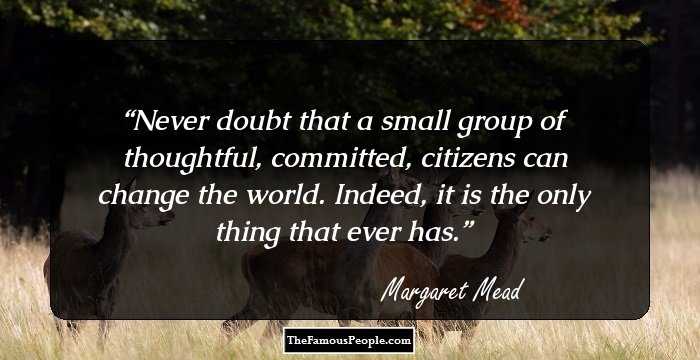 Quotes: Change, Never
Continue Reading Below
You May Like

The Sexiest Men Of 2020, Ranked
Career
In 1925, she went off to Samoa on a fieldwork to study the life of adolescent girls. She found that young Samoan girls experienced none of the tensions that the American and European teenagers suffered from, and studied the reasons behind it. She published ‘Coming of Age in Samoa’ in 1928 after her expedition.
In 1928, she went off on another expedition in New Guinea for her project on the study of the thought of young children. After her expedition to New Guinea, she published ‘Growing Up in New Guinea’ (1930) describing the social and cultural elements which influenced their character as an individual.
Her later works included ‘Male and Female’ (1949) and ‘Growth and Culture’ (1951), in which she argued that personality characteristics were shaped by cultural conditioning rather than by hereditary factors.
From 1954 to 1978, she taught at The New School and Columbia University as an adjunct professor. She was a professor of anthropology and chair of the Division of Social Sciences at Fordham University's Lincoln Center campus from 1968 to 1970.
She served many years of her life in the American Museum of Natural History in New York City. She successively served as assistant curator (1926–42), an associate curator (1942–64), curator of ethnology (1964–69), and curator emeritus (1969–78). 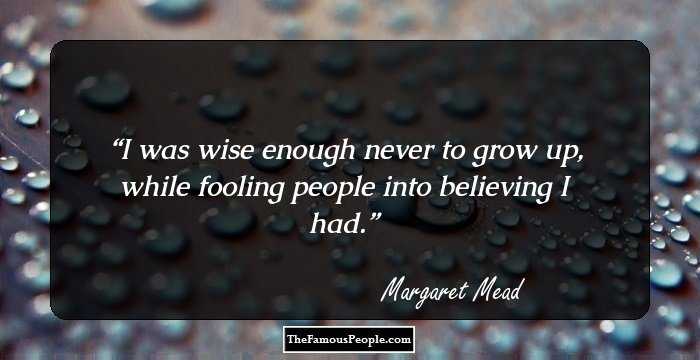 Quotes: Never, I
Major Works
As an anthropologist, she was best known for her studies on the illiterate peoples of Oceania. She studied them from various aspects of a human evolution—natural, cultural and sexual behavior—and contributed greatly to psychological research.
She is also significantly remembered for her insight in social issues such as women’s rights, child rearing, sexual morality, population control, environmental pollution and world hunger.
Awards & Achievements
She was elected a Fellow of the American Academy of Arts and Sciences, in 1948.
Continue Reading Below
In 1970, she was awarded the ‘Kalinga Prize for the Popularization of Science’ by the UNESCO.
In 1979, she was posthumously awarded the Presidential Medal of Freedom.. 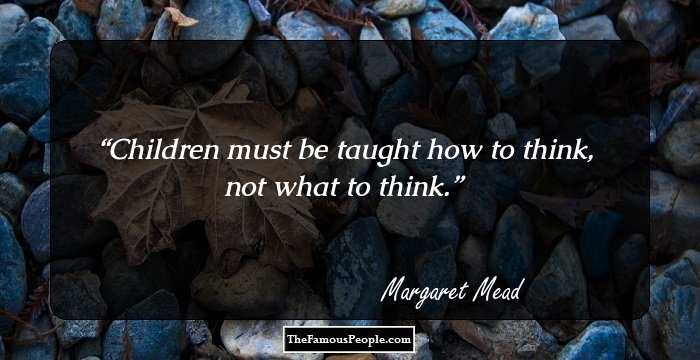 Quotes By Margaret Mead | Quote Of The Day | Top 100 Quotes

See the events in life of Margaret Mead in Chronological Order