Woodrow Wilson “Woody” Guthrie was a singer-songwriter counted among the most prominent figures of American folk music. The musician best known for his song, ‘This Land Is Your Land’ had produced numerous folk, traditional, political, and children’s ballads and songs over his career. Even though born into a prosperous household, he had a troubled childhood as his mother suffered from a severe neurological disorder and had to be institutionalized. He also experienced difficult times during the Dust Bowl era, a period characterized by severe dust storms in America during the Great Depression—the pains of which were often reflected in his songs. He traveled with migrant workers and learned their traditional songs during this period. Later on he became a radio performer and achieved considerable fame for his hillbilly and traditional folk music. He became highly critical of the patriotic song, ‘God Bless America’ and decided to improvise on it. Thus was born his most famous creation, ‘This Land Is Your Land’ which went on to become one of U.S.’s most popular folk songs. Woody personified the heart of America as his songs resonated with the sentiments of the American working class. A prolific writer, he also wrote poems and prose in addition to songs, most of which were never published. American Celebrities
Folk Singers
Lyricists & Songwriters
Non-Fiction Writers
American Men
Childhood & Early Life
He was born to Nora Belle and Charles Guthrie in Oklahoma. His father was a businessman who was active in politics too.
He experienced several fire accidents as a child. It was, however, never determined if the fires were accidental or set by his mother who was suffering from Huntington’s disease.
His mother was sent to Oklahoma Hospital for the Insane because of her neurological disorder when Woody was 14.
His family once prosperous fell on bad times and the teenager had to work odd jobs to make a living.
He was naturally inclined towards music and would play songs around town for a sandwich.
He was an intelligent kid and an avid reader though he dropped out of high school before graduation.
He decided to pursue a career in music and learned traditional and folk ballads. He polished his musical skills by performing at dances with his uncle who was a fiddle player. 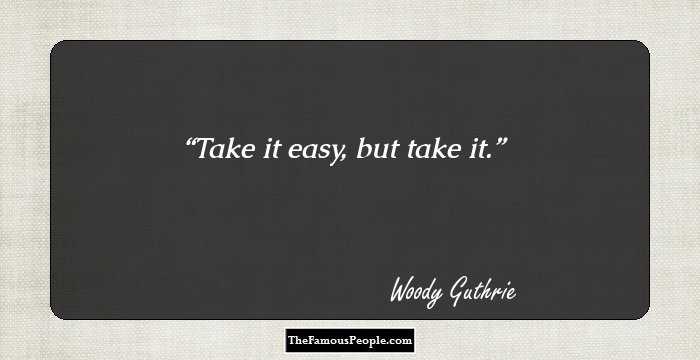 Continue Reading Below
Career
During the late 1930s, he became a radio performer. He became quite popular for his folk music along with his radio partner Lefty Lou. During this time he also began writing and performing protest songs.
He wrote a column titled ‘Woody Sez’ for the Communist newspaper, ‘The Daily Worker’ from May 1939 to January 1940.
He moved to New York and wrote the song ‘This Land Is Your Land’ in February 1940. The song became very famous and is counted among America’s best-loved folk songs.
His first commercial album ‘Dust Bowl Ballads’ was released in 1940. The lyrics of the songs had elements of social activism and dealt with the hardships faced by migrant workers in California.
He was hired by the Department of Interior in 1941 to write songs about the Columbia River and the construction of dams for the soundtrack of a documentary about the same. He wrote 26 songs for this project which included three of his highly popular songs ‘Roll on Columbia’, ‘Pastures of Plenty’ and ‘Grand Coulee Dam’.
Woody collaborated with fellow folk singer Pete Seeger’s folk-protest group, the Almanac Singers who hosted concerts called ‘hootenannys’ in New York City. His songs had an authentic feel to them as Woody wrote of his own experiences of the difficult times during the Great Depression.
He was also a writer in addition to being a musician. His partially fictionalized autobiography ‘Bound for Glory’ was released in 1943. The book was later adapted into a movie in 1976.
During the World War II, he joined the U.S. Merchant Marine as a mess man and regularly sang for the crew in order to motivate and cheer them up. He was deemed ineligible for any further service in the Merchant Marine in 1945 and was drafted into the U.S. Army.
After being discharged from the army he wrote and recorded ‘Songs to Grow on for Mother and Child’ (1947) which was a collection of songs meant for children.
Continue Reading Below
He suffered from Huntington’s disease and his health began deteriorating by the 1950s. He also had a campfire accident that injured his arm and left him unable to play guitar. 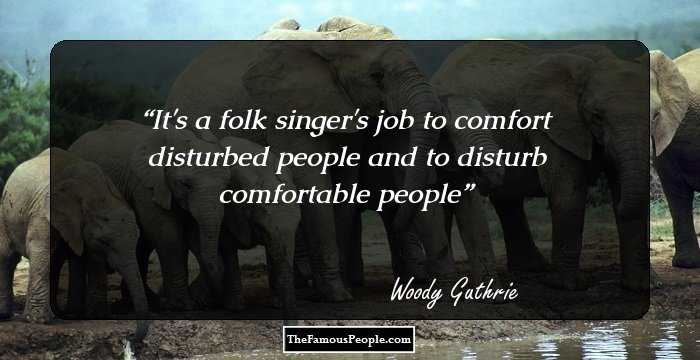 Major Works
The song ‘This Land Is Your land’ written by him in response to the patriotic song ‘God Bless America’ became one of the U.S.’s most popular folk songs. He believed that the lyrics of ‘God Bless America’ were too unrealistic and complacent and therefore felt the need to write a response to it. The song was added to the National Recording Registry in 2002.
Awards & Achievements
He was presented with the Conservation Service Awards in 1966 by the U.S. Department of the Interior.
He was given The North American Folk Alliance Lifetime Achievement Award posthumously in 1996. 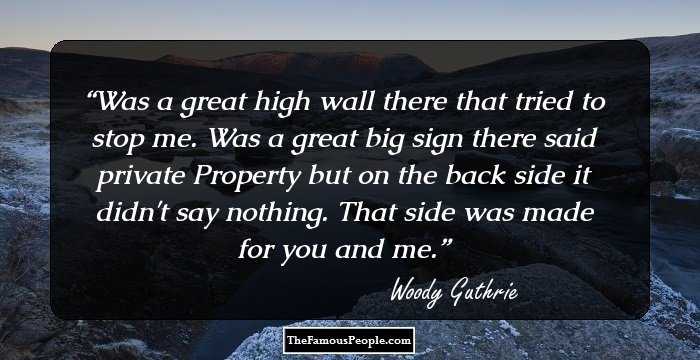 Quotes: You, Me
Personal Life & Legacy
His first marriage was to Mary Jennings with whom he had three children. The marriage ended in a divorce in 1943.
He later married Marjorie and had four children with her. He was diagnosed with Huntington’s disease and his wife divorced him fearing that he would be a threat to their children.
He wed again to Anneke Van Kirk. They had one daughter. Anneke could not bear the strain of caring for him as his disease progressed and divorced him.
His second wife Marjorie returned to care for him till his death.
He had to be hospitalized as his disease worsened. He died in 1967 at the age of 55.
Trivia
This popular musician was named after the U.S. Democrat Woodrow Wilson who went on to become the President.
His song ‘Roll On Columbia’ was selected as the official Washington State Folk Song in 1987.

Quotes By Woody Guthrie | Quote Of The Day | Top 100 Quotes

See the events in life of Woody Guthrie in Chronological Order