Kanye Omari West is an American rapper, fashion designer, and record producer. He was raised in the middle-class background of the Chicago city by his highly educated mother Donda West. He had a knack for creativity and poetry from a very young age. He started rapping from the age of seven and soon confessed to his mother that he wanted to take recording music more formally. When he was twenty, he decided to drop out of college and pursue music professionally. His mother supported him in his endeavors. He started as a small-time producer until he met Jay-Z and produced The Blueprint for him. From that time onwards, Kanye West started getting recognition and worked with talented people like Ludacris, Janet Jackson, Alicia Keys, etc. But West’s main aspiration was to become a rapper and it was not until the year 2002, that he was given his first opportunity to record his solo album. From then onwards there was no looking back for West and he gave to the entertainment industry good hip-hop music in the form of The College Dropout, Late Registration, Graduation, My Beautiful Dark Twisted Fantasy, etc. His music has always been appreciated by music critics for its innovation and the risk that he takes with its creativity. Kanye West has always been in the news, whether it is for the numerous awards he has won or for the controversies that he has caused over the years. Kanye West was born on June 8, 1977, in Atlanta, Georgia, USA, to Dr. Donda C. Williams West and Ray West. His father was one of the former Black Panthers and the first ever black photojournalist at The Atlanta Journal-Constitution. His mother was an English Professor at the Clark Atlanta University and also the Chair of English Department at the Chicago State University. His parents divorced when he was only 3 years old and he moved in with his mother to Chicago, Illinois.

West was raised in a humble way and belonged to a middle-class background. He did his schooling from Polaris High School in Illinois. He shifted to Nanjing, China at the age of ten when his mother was asked to teach at the Nanjing University as part of an exchange program. He was creative from an early age. He wrote his first poetry at the age of 5. He started to rap at the young age of 5 and had composed his own music by the time he was in the seventh grade.

Kanye West started to get more and more involved in the hip-hop scene of Chicago and when he was thirteen, he wrote a rap song called Green Eggs and Ham. He persuaded his mother to pay him money so that he can start recording in a studio. Although his mother did not want this for him, she started accompanying him to a small basement studio in the city. There, West met The Godfather of Chicago Hip Hop, No I.D. He soon became West’s mentor.

In 1997, West was offered a scholarship from Chicago’s American Academy of Art and he took upon it to learn the art of painting and then took the transfer to the Chicago State University to pursue English literature. At the age of twenty, he decided to drop out of college to pursue his dream of becoming a rapper and musician, full time. 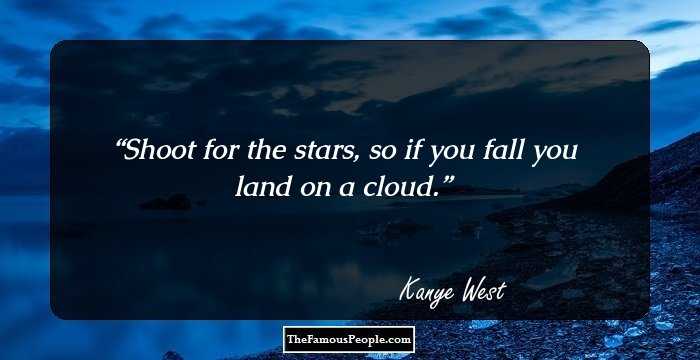 From mid 90s until the early 2000s, Kanye West was involved in small-time music production projects. He made music for local artists and was also a ghost producer for Deric "D-Dot" Angelettie. West got the much awaited opportunity in 2000, when he became the producer for artists on Roc-A-Fella Records. He produced hit singles for famous singers like Common, Ludacris, Cam’Ron, etc. In 2001, world renowned rapper and entertainment business tycoon Jay-Z asked West to produce many tracks of his hit album The Blueprint.

Around this time, he continued to produce tracks for singers and rappers like Alicia Keys, Janet Jackson, etc. Subsequently, he became a successful producer but his true desire was to become a rapper. It became a very challenging situation for him to get acceptance as a rapper and crack a record deal. In 2002, Kanye got the breakthrough that he was looking for in an unusual fashion. He met with an accident while coming back from a long recording session in L.A., as he fell asleep at the wheels. While he was in the hospital, he wrote down the song Through the Wire, which was three weeks later recorded by Roc-A-Fella Records and became a part of his debut album Death.

In 2004, Kanye West came up with his second album The College Dropout, which became an instant hit among music lovers. It sold 441,000 copies in its first week. It secured the number two position on Billboard 200. It has a number called Slow Jamz that featured Twista and Jamie Foxx alongside West. It was voted as the top album of the year by two big music publications. Another track from the album called Jesus Walks showcased West’s emotions about faith and Christianity.

In 2005, West collaborated with American film composer Jon Brion, who co-executively produced many tracks on the album, to work on West’s new album Late Registration. He hired a string orchestra for the album and afforded the cost with the money he had made from The College Dropout. It sold 2.3 million copies in the United States. In the same year, West announced that he will release his Pastelle Clothing line in 2006, but it was cancelled in 2009.

In 2007, Kanye West released his third studio album Graduation. He released it at the same time 50 Cent’s Curtis came out. But Graduation out sold Curtis by a huge margin and secured number one position at the US Billboard 200. It sold about 957,000 copies in its very first week. A track called Stronger became West’s biggest hit single thus far.

In 2008, West released his fourth studio album 808s & Heartbreak. The album topped the Billboard charts and sold 450,000 copies during its first few weeks. The inspiration of this album came from the sad demise of West’s mother Donda West and break-up with his fiancée Alexis Phifer. The album is said to have inspired the hip hop music and other rappers to take more creative risks with their productions. In the same year, West announced that he would open 10 Fatburger restaurants in Chicago. The first one was opened in Orland Park in 2008.

In 2009, West teamed up with Nike to release his own shoes. He named them Air Yeezys and released another version of it in the year 2012. In the same year, he came out with his new shoe line for Louis Vuitton and released it during the Paris Fashion Week. Kanye West also designed shoes for Bape and Giuseppe Zanotti.

In 2010, West’s fifth studio album My Beautiful Dark Twisted Fantasy was released and it topped the Billboard charts in its first few weeks itself. It was considered a genius work by the music critics. It got rave reviews from all over the world and included hits like All of the Lights, Power, Monster, Runaway, etc. This album went platinum in the United States.

In 2013, West came up with his sixth album Yeezus and took a more non-commercial approach in making it. He incorporated genres like Chicago Drill, Dancehall, Acid House, and Industrial Music in the making of this album. The album was released in the month of June and has received rave reviews from the music critics.

On February 14, 2016, Kanye West released his seventh album titled The Life of Pablo.

In January 2019, Kanye West started his weekly Sunday Service orchestration. It includes soul variations, West's songs, and songs by other celebrities. In January 2022, he announced the release of his eleventh studio album, Donda 2. 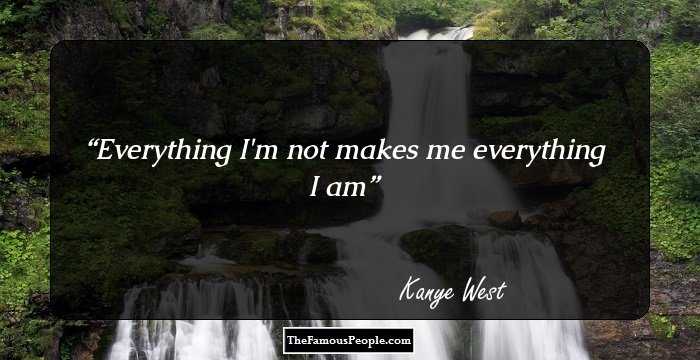 Quotes: Me, I
Awards & Achievements

For his album The College Dropout, West grabbed 10 Grammy nominations, including Album of the Year and Best Rap Album. He won a Grammy for the Best Rap Album category. His album was certified triple platinum in the United States.

In November 2007, Kanye West’s mother Donda West died of a heart disease right after she underwent a plastic surgery procedure. She was 58 years old at the time. This left West in turmoil, as he was extremely close to his mother; she had released her memoir before her death called Raising Kanye: Life Lessons from the Mother of a Hip-Hop Superstar.

Kanye West was in an on-and-off relationship with designer Alexis Phifer for four years before getting engaged to her in August 2006. The engagement lasted 18 months before the pair called it quits in 2008.

In February 2021, Kardashian filed for divorce from West. In 2022, West began dating actress Julia Fox before breaking up with her in less than two months. 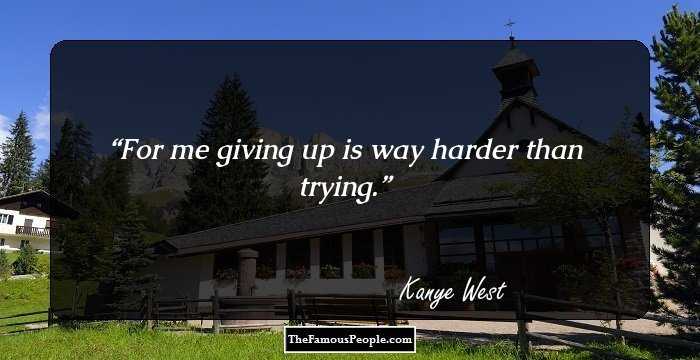 When Kanye West dropped out of college in 1996, his mother became very upset with him but later on with his success as a musician she confessed that not everybody has to go through formal education to prove their worth.

After a near death experience in 2002, West recorded his first solo Through the Wire at the studio with his jaw still wired shut.

In 2004, when West lost the Best New Artist award to Gretchen Wilson at the American Music Awards, he claimed that he will never return to the music awards ever again. But later on, he apologized for his attitude.

West is one of the rare entertainers to make it to the cover of Time magazine. He was named among the 100 most influential people of the year 2005 by the magazine.

West co-hosted the Concert for Hurricane Relief televised show and he strayed from his script and announced out of blue that “George Bush doesn't care for black people.” His statement became the national headline and George Bush called it the most disgraceful moment in his presidency.

In 2009, at MTV VMAs, while Taylor Swift gave her acceptance speech for the Best Female Video Award, Kanye West jumped in between and said that Beyonce’s Single Ladies is the best video of all time. This act of West was highly criticized and celebrities like Kelly Clarkson and President Obama criticized his antics. Later, Kanye West made a personal phone call to Taylor and apologized.

See the events in life of Kanye West in Chronological Order