Bruce Springsteen is a popular American singer, prolific songwriter, guitarist, and recording artist. He became popular because of his unique and creative songwriting ability. His songwriting skills caught the attention of a lot of people, fans, and music professionals alike. Most of his songs reflect his political opinions and his working-class roots in New Jersey, where he grew up. He is a positive thinker; he sees greatness in the labors of daily American life and is stimulated by the stories of ordinary people. He is not a religious person, but doesn’t deny the fact that his Catholic upbringing has guided his musical career. He is one of America's most admired musicians. His greatest work ‘Born in the USA’ is a best-selling album. His album ‘Born to Run’ is also regarded as one of the best rock and roll albums and Springsteen's finest works. The title track of the album was an analysis of the unfair treatment of Vietnam veterans, some of whom were his friends. His songs ‘Born in the USA’ and ‘Born to Run’ have made Springsteen the rock star that he is today. Humanitarian Work: Donated the proceeds from his performance for hurricane Sandy victims

American People
Rock Singers
Lyricists & Songwriters
American Men
New Jersey Musicians
Childhood & Early Life
Bruce Springsteen was born Bruce Frederick Joseph Springsteen on September 23, 1949, in New Jersey, USA, to Douglas Frederick and Adele Ann.
After being inspired by Elvis Presley’s performance on ‘The Ed Sullivan Show,’ he wanted to become a musician.
His mother saw his potential and encouraged him. He bought his first guitar for $18.95 in 1964; it started his lifetime affair with the guitar.
The nickname ‘Boss’ stuck with him for his task of collecting the band's nightly pay and distributing it among his band mates. 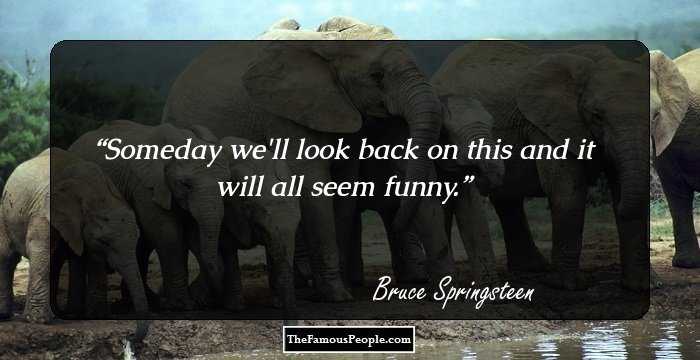 Quotes: Will
Continue Reading Below
Career
Springsteen’s mother bought him a $60 Kent guitar in 1964, which was remembered in his song ‘The Wish.’
He started performing with various bands. In 1970, well-known ‘San Francisco Examiner’ music critic Philip Elwood gave him a compliment by depicting him as the most remarkable composer.
Starting from 1970, he tried to form various bands that didn’t turn out well. Two years later, he caught the attention of the likes of Mike Appel, Jim Cretecos, and John Hammond who worked together to land him a record deal with ‘Columbia Records.’
‘Crawdaddy’ magazine’s editor Peter Knobler interviewed him in 1973 and remarked saying “He sings with a freshness and urgency I haven't heard.”
Boston's ‘The Real Paper’ music critic Jon Landau saw his performance at the ‘Harvard Square Theater’ in 1974, and commented that Bruce Springsteen is the future of rock and roll.
In 1975, Springsteen and the ‘E Street Band’ began a show at New York's ‘Bottom Line Club.’ It became so popular that the ‘Rolling Stone’ magazine recorded the event as ‘One of the 50 Moments That Changed Rock and Roll.’
Also in 1975, his third album ‘Born to Run’ catapulted him to fame. It peaked on ‘Billboard 200’ at No.3. He was on the covers of both ‘Time’ and ‘Newsweek’ magazines simultaneously, something that previously happened only with world leaders.
In 1977, a lawsuit between him and former manager Mike Appel kept him out of the studio for nearly a year.
‘Born in the USA’ sold 45 million copies worldwide in 1984, becoming one of the best-selling albums, with seven singles hitting the Top 10.
Continue Reading Below
He released his album ‘Tunnel of Love’ in 1987. He performed at the ‘Tunnel of Love Express Tour’ at the ‘Radrennbahn Weißensee’ in East Berlin, which was attended by 300,000 fans.
Springsteen was inducted into the ‘Rock and Roll Hall of Fame’ in 1999.
In 2008, he sang ‘Working on a Dream’ with Scialfa in support of Barack Obama’s presidential campaign.
He performed at the halftime show at ‘Super Bowl XLIII’ on February 1, 2009.
During the years 2012-2014, the singer released two albums titled ‘Wrecking Ball’ and ‘High Hopes.’ The 2014 album ‘High Hopes’ consists of covers performed by Bruce.
In January 2016, ‘The River Tour’ began in support of ‘The Ties That Bind: The River Collection’ box set.
‘Chapter and Verse,’ a collection from Springsteen's career dating back to 1966, was released in September 2016.
In September 2016, Springsteen performed for four hours and four minutes at ‘Citizens Bank Park’ in Philadelphia, Pennsylvania as part of ‘The River 2016 Tour.’ It is his longest-ever show in the United States.
The live album ‘Springsteen on Broadway’ was released in December 2018.
Continue Reading Below
His 19th album ‘Western Stars’ was out in June 2019. 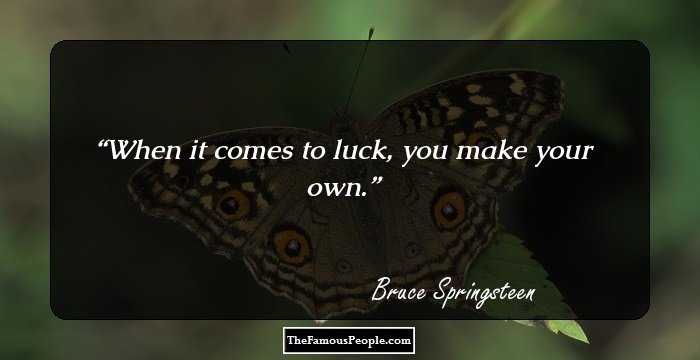 Quotes: You
Major Works
Springsteen’s albums ‘Born in the USA’ and ‘Born to Run’ have sold more than 184 million albums all over the world. The albums made him one of the world's best-selling artists.
Awards & Achievements
Bruce has received multiple awards and citations from the US as well as from different countries like Great Britain, Sweden, and others for his talent and contribution to the field of music.
This legendary singer has won various awards for his work. His awards include 20 ‘Grammys,’ two ‘Golden Globes,’ and an ‘Academy Award.’ He has also been inducted into the ‘Songwriters Hall of Fame’ and the ‘Rock and Roll Hall of Fame.’
He was named one of the eight ‘Artists of the Decade’ and the fourth-highest grossing concert artist of the decade by the ‘Rolling Stone’ magazine.
In 2009, he received the ‘Kennedy Center Honors,’ an award given to personalities from the world of arts for their contribution to American culture.
In 2013, Springsteen, along with his friend and mentor Pete Seeger and 198 other celebrities, was honored at the ‘American Academy of Arts and Sciences,’ held at the Academy's headquarters in Cambridge, Massachusetts. 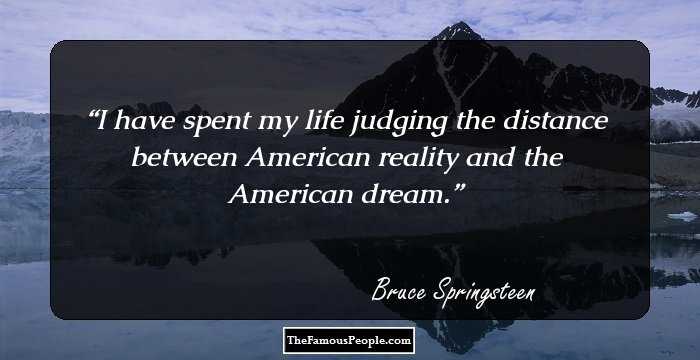 Quotes: Life, I
Personal Life & Legacy
It was during the ‘Born in the U.S.A. Tour’ where he met his future wife, actress Julianne Phillips. They got married in 1985.
Unfortunately, their affection for each other did not last long, and Springsteen began an affair with ‘E Street Band’ backup singer Patti Scialfa. Bruce and Julianne were divorced in 1989.
Meanwhile, Springsteen moved in with Scialfa. They got married in 1991 and were blessed with three kids.
New Jersey was hit by ‘Hurricane Sandy’ in 2012, prompting Bruce to extend his help. He dedicated his performance at the ‘Blue Cross Arena’ in Rochester to the victims of the storm. He also performed for a one-hour telethon for the benefit of the ‘American Red Cross,’ and performed at ‘Madison Square Garden’ for ‘Sandy Relief.’
Trivia
This famous singer is a huge fan of ‘The Daily Show with Jon Stewart.’ He even watched the show as an anonymous fan, seated among the audience.

Quotes By Bruce Springsteen | Quote Of The Day | Top 100 Quotes

See the events in life of Bruce Springsteen in Chronological Order