Stephanie ‘Stevie’ Lynn Nicks is a singer-songwriter, known for her career with the British-American rock band ‘Fleetwood Mac.’ She changed the fortune of the band for the better after joining it in 1975. After joining the band, she created history with her second album ‘Rumours’ which won the ‘Grammy Award for Album of the Year’ and was eventually certified ‘2× Diamond’ by the ‘Recording Industry Association of America’ (RIAA). After a very successful stint with the band, she decided to go solo. Her debut solo album ‘Bella Donna’ charted at No.1 on the ‘U.S. Billboard’ and received platinum certifications within months of its release. Her second album ‘The Wild Heart’ also received platinum certifications, establishing Nicks as a solo artist. She had many friends in the music industry, and invited them to play music for her albums. Her next album ‘Rock a Little’ was also a huge hit and received platinum certifications like its predecessors. However, the stress of working so hard had a toll on her mental and physical well-being, and she developed a drug addiction problem. The talented singer struggled hard to overcome her substance abuse and was eventually successful in leaving this troubled part of her life behind. A prolific performer, she is credited to have produced more than 40 ‘Top 50’ hits with a sale figure exceeding 140 million albums. American People
Lyricists & Songwriters
American Women
Arizona Musicians
San Jose State University
Childhood & Early Life
Stevie Nicks was born on May 26, 1948, in Phoenix, Arizona, USA, to Jess Nicks, a corporate executive, and Barbara. She lived in an extended family and her music-loving grandfather taught her to sing and play the guitar.
Her family moved a lot due to the nature of her father’s job, and she spent her childhood in Phoenix, El Paso, Salt Lake City, and Los Angeles.
She was gifted a guitar for her 16th birthday, and spent her teenage years writing and playing music.
She went to ‘Arcadia High School’ and later attended ‘Menlo Atherton High School’ where she met her future professional partner Lindsey Buckingham.
She attended ‘San Jose State University’ where she majored in speech communication. She dropped out in 1968 to pursue a music career. 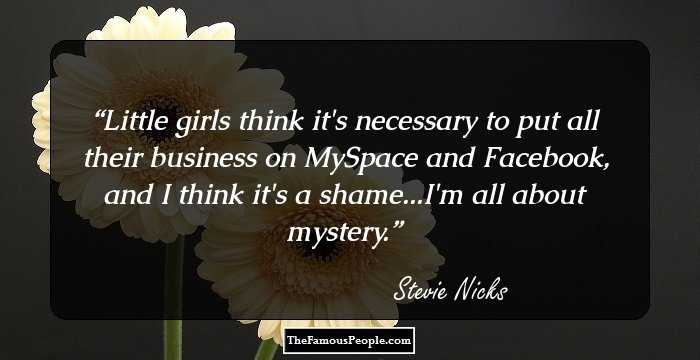 Quotes: Think, Business, I
Continue Reading Below
You May Like

Who Is The Most Popular BTS Member?
Career
Her friend Lindsey Buckingham formed a band called ‘Fritz’ with Javier Pacheco and Calvin Roper, and invited her to join. She became part of the band in 1968 and they performed live, opening for famous musicians like Jimi Hendrix and Janis Joplin. ‘Fritz’ disbanded in 1972.
Nicks and Buckingham joined Mick Fleetwood’s band ‘Fleetwood Mac’ in 1975. Their first album with the band was ‘Fleetwood Mac’ in 1975. Nicks sang the hit single, ‘Rhiannon.’
The band released ‘Rumours’ in 1977. The band members were going through a difficult time and were hoping for a success. The album which featured her single, ‘Dreams,’ became a bestseller and won a ‘Grammy Award.’
She performed in ‘Tusk’ (1979) and ‘Live’ (1980) with the band before embarking on a solo career; she continued performing for the band in future.
Her debut solo album ‘Bella Donna’ was released in 1981 which peaked at No.1 on the ‘U.S. Billboard chart.’ The album received multiple platinum certifications and established her as a solo star.
‘The Wild Heart,’ her next studio album was out in 1983, followed by ‘Rock a Little’ in 1985. Both the albums were accredited platinum status.
She took a break from her solo career for a period of four years and returned with ‘The Other Side of the Mirror’ in 1989. It featured the hit single ‘Rooms on Fire.’
During this period, her cocaine addiction problem worsened and she developed dependency on a sedative called Klonopin. She toured the UK, US, and Europe extensively after the release of the album, but claimed to have no recollection of the tours due to her drug problems.
After a very difficult period in her personal as well as professional life, she came up with the album ‘Street Angel’ in 1994. The album did not do well, forcing her to take time off to get over her drug dependency.
Continue Reading Below
The band members of ‘Fleetwood Mac’ reunited in 1997 for a tour called ‘The Dance’ that coincided with the 20th anniversary of the release of the band’s highly successful album ‘Rumours.’ The tour was a huge hit and gave Nicks the much needed confidence to move ahead.
In 2001, she released ‘Trouble in Shangri-La’ after going without a solo album for seven years. The album did well and received gold certification in the U.S.
Her album ‘In Your Dreams’ was released in 2011 and coincided with the 30th anniversary of the release of her debut solo album, ‘Bella Donna.’
In 2014, she released her eighth solo album ‘24 Karat Gold: Songs from the Vault’ which debuted at number 7 at the ‘US Billboard.’ She then joined ‘Fleetwood Mac’ for the ‘On with the Show’ tour.
She has since toured with other bands, such as ‘The Pretenders.’ She also performed in Lana Del Ray’s album ‘Lust for Life.’
In her entire career, spanning more than five decades, she has appeared on several television shows which includes, ‘American Horror Stories,’ ‘The Ellen DeGeneres Show,’ ‘The Oprah Winfrey Show,’ ‘Late Show with David Letterman,’ ‘American Idol,’ ‘Saturday Night Live,’ and many more. 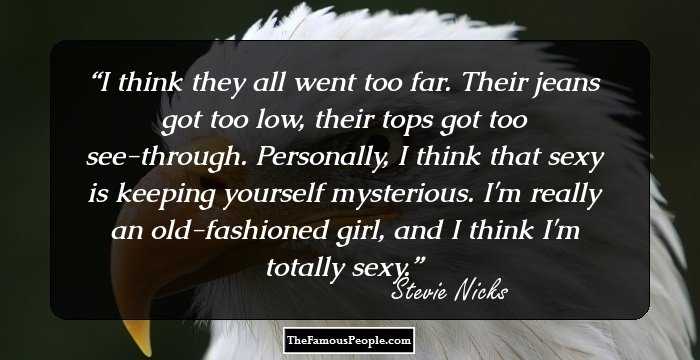 Quotes: Think, Yourself, I
Major Works
Her debut album ‘Bella Donna’ (1981) peaked at No.1 on the ‘U.S. Billboard’ chart and received multiple platinum certifications. It featured hit singles like ‘Edge of Seventeen’ and ‘Leather and Lace.’
The album, ‘The Wild Heart’ (1983) featured several prominent musicians in guest appearances and housed hits like ‘Stand Back’ and ‘Beauty and the Beast.’ It was certified double-platinum in the U.S.
Continue Reading Below
Her 1985 album ‘Rock a Little’ received platinum certification in the U.S just one month after its release, and was accredited gold in the U.K. It spawned the hit singles ‘Talk to Me’ and ‘I Can’t Wait.’
Awards & Achievements
She received eight ‘Grammy Award’ nominations throughout her solo singing career. 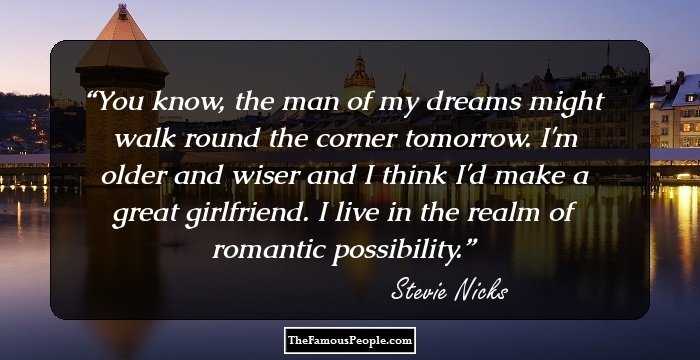 Quotes: You, Think, Dreams, I
Personal Life & Legacy
She was in a relationship with Lindsey Buckingham for several years before breaking up.
She married the widower of her best friend in order to take care of the baby her friend left behind. Though the marriage did not last long, she maintained good relations with her former stepson.
She started ‘Stevie Nicks’ Band of Soldiers,’ a charity that works for the betterment of wounded military personnel.
In April 2019, she was inducted into the ‘Rock and Roll Hall of Fame,’ becoming the first woman to be inducted twice, once before as the member of the band ‘Fleetwood Mac’ in 1998.
Trivia
She was named by the ‘Rolling Stone’ magazine as ‘The Reigning Queen of Rock and Roll.’
It was rumored that she is a witch.
She is known for making platform boots fashionable among the general public.

Quotes By Stevie Nicks | Quote Of The Day | Top 100 Quotes

See the events in life of Stevie Nicks in Chronological Order