(One of the Most Influential and Popular Rappers of All Time)

Eminem is an American rapper, record producer, songwriter, and actor. He is considered as one of the greatest and most influential artists of all time. The 'Rolling Stone' magazine has labeled him the 'King of Hip Hop,' and listed him in its list of the '100 Greatest Artists of All Time.' He became passionate about rapping at a young age of fourteen, and began attending local open-mic competitions with friends. As he grew up, he formed a group of rappers called 'D12,' which became quite popular among local music lovers. Soon, he caught the attention of famous record producer Dr. Dre, and with Dre's assistance, he released successful albums like 'The Slim Shady LP,' and 'The Marshall Mathers LP.' His albums have all been roaring hits, making him one of the biggest sensations in the rap industry. Most of his songs are based on his personal struggles with his family members and his career. This is considered by many as the USP of his albums, making them close to his fans' hearts. He has often run into trouble with the law. He is known for his explicit use of words, often sending out aggressive signals. Yet, this famous rap artiste has managed to win the hearts of critics and followers alike, bagging more than a dozen 'Grammy Awards.' American People
Musicians
Hip Hop Singers
American Men
Missouri Musicians
Childhood & Early Life
Eminem was born Marshall Bruce Mathers III in St. Joseph, Missouri, to Marshall Bruce Mathers, Jr and his wife Deborah Rae "Debbie" Nelson, on October 17, 1972.
Marshall's parents were members of 'Daddy Warbucks,' a band that used to perform at a hotel named 'Ramada Inns.' His father, Bruce, and mother, Debbie, later separated, and went on to have different partners.
Eminem has three half-siblings, Michael, Sarah, and Nate. Marshall lived with his mother, Debbie. They relocated to several cities, before settling down in Detroit, Michigan.
He grew up in a predominantly black neighbourhood, where he was often bullied by African-American youngsters. As a child he showed affinity toward comics and music, particularly rapping.
He had a difficult childhood and he was never on good terms with his mother. He was, however, close to her half-brother, Ronnie. Marshall's education suffered as a result of constant tiffs with Debbie, and he dropped-out of 'Lincoln High School,' when he was seventeen. 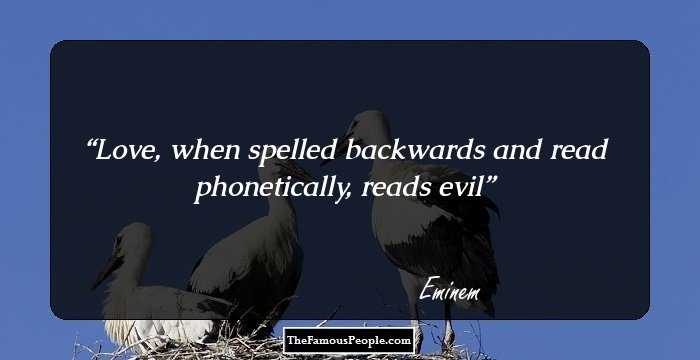 Quotes: Love
Continue Reading Below
Career
When Marshall was only fourteen years old, he joined his friend Mike Ruby to practice rapping. The two friends called themselves 'Manix' and 'M&M', the latter becoming 'Eminem' in future.
Marshall also attended rap contests at the 'Osborn High School,' along with his friend DeShaun Dupree Holton, who later became famous as rapper Proof. The two rappers went to all such music contests at West 7 Mile, in Detroit. To excel in the art, Eminem practised writing long words and phrases that rhymed with each other.
He initially rapped with a group called the 'New Jacks,' but later moved to 'Soul Intent,' the band that brought out a song in 1995, featuring Eminem and Proof.
The two friends later separated from ‘Soul Intent’ and formed their own group called 'D12' or 'The Dirty Dozen,' in 1996. This group included famous rappers Kon Artis and Bizarre. The group has produced several record breaking singles like 'Fight Music,' 'Shit on You,' and 'How Come.'
In 1996, Eminem brought out his first album titled 'Infinite.' The album was recorded under the banner of 'FBT Productions,' and included songs that spoke about the struggles he faced after the birth of his daughter, at a time when he was financially unstable.
His financial condition had worsened and by 1997, he was forced to live in his mother's house with his family. During this time, to let go of the frustration building inside him, he created an anti-social alter-ego named 'Slim Shady.' He even recorded his first extended play by the same name in the same year.
In 1997, he contested in the 'Rap Olympics' and secured the second place. Dr. Dre, the owner of 'Aftermath Entertainment,' heard his 'Slim Shady EP (Extended Play).' He was highly impressed with Eminem and showed keen interest in working with the talented rapper.
In February 1999, Dr. Dre helped Eminem release an album titled 'The Slim Shady LP,' which immediately catapulted him to fame. With hits like 'My Name Is,' '97 Bonnie and Clyde,' and 'Guilty Conscience,' it was one of the most successful albums of the year.
The same year, he founded the record label 'Shady Records' along with friend Paul Rosenberg.
Continue Reading Below
In May, 2000, Eminem released an album titled 'The Marshall Mathers LP', an album that sold almost 2 million copies in the opening week itself. The album included the record-breaking hit 'The Real Slim Shady', which topped the charts despite outrageously insulting other artistes.
The other famous song, 'Stan', from the album ‘Marshall Mathers LP’, featuring English singer Dido, and her single 'Thank You', saw a slight shift from the artist’s usual style of rapping. It talks about an obsessed fan of rapper Slim Shady, who kills himself and his girlfriend who is pregnant, on being ignored by his idol.
The same year, the famous rapper featured in ‘8 Mile’, a movie based loosely on his life, though the artiste claims otherwise.
During 2001-2004, the famous rap artiste released popular albums like 'The Eminem Show', and 'Encore'. The albums included hit singles like 'Without Me', 'Superman', 'Mockingbird', and 'Just Lose It'. During this time he also assisted Dr. Dre on several songs including the 'Grammy' winning 'Forgot About Dre'.
Eminem collaborated with popular singer Elton John to sing at the 'Grammy Awards' ceremony in 2001. The organization called 'Gay & Lesbian Alliance Against Defamation' ('GLAAD'), displayed their resentment towards the decision since allegedly the rap artiste openly criticized homosexuality.
The same year, he also went touring with famous rap artistes like Xzibit, Snoop Dogg, and Dr. Dre. In 2004, the artiste helped Afeni Shakur release a posthumous album of the latter’s son rapper 2Pac.
In 2006, the rapper produced ‘The Re-Up’, an album of compiled songs, under the banner of his label ‘Shady Records’. The same year he appeared at the ‘BET Music Awards’, singing a song titled ‘Touch It’. He also sang for albums by Akon, 50 Cent, and Lil Wayne, the most memorable song being ‘My Life’.
Two years later, in 2008, the artiste published a book named ‘The Way I Am’, which spoke about his life and career. The autobiography also provides readers with the lyrics for songs like ‘The Real Slim Shady’, and ‘Stan’.
From 2009-2010, the sensational rapper released the studio albums 'Relapse', and 'Recovery'. 'Relapse' boasts of successful singles like 'Beautiful', and 'We Made You', while 'Recovery' was the most popular digital album ever.
Continue Reading Below
The album ‘Recovery’ includes songs like 'Not Afraid', 'Love the Way You Lie', featuring singer Rihanna, and 'No Love', along with fellow rapper Lil Wayne.
In 2014 the rapper released an album named 'SHADYXV', which had hits like 'Guts Over Fear' and 'Detroit Vs. Everybody'. The album featuring various top-notch artistes became an instantaneous hit, selling 138,000 copies in the first week of release.
A collection of ten discs titled 'The VINYL LPS', containing all albums produced by the famous rapper, was released in 2015.
The rap artiste has made guest appearances in several movies including ‘The Wash’, ‘Funny People’, and ‘The Interview’. He has also featured in a TV show named ‘Entourage’.
Eminem has also appeared in numerous concerts including 'BET Awards', 'The Home & Home Tour' with singer Jay-Z, and 'MTV Video Music Awards', throughout his career. 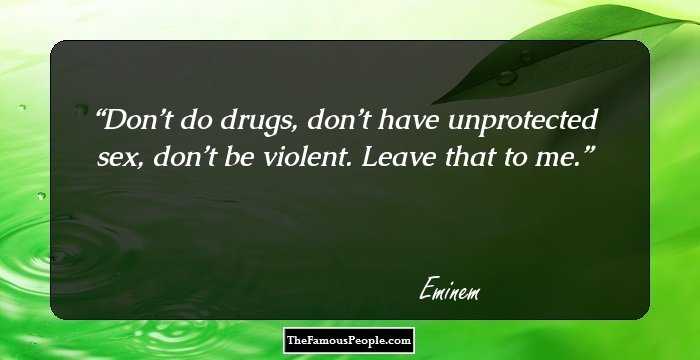 Quotes: Me
Major Works
Though this rapper has won awards for almost every single album that he has released, the most famous is ‘The Marshall Mathers LP’, which is credited as the fastest-selling record in the history of rap.
Awards & Achievements
In 2001, the popular rapper was presented the 'Academy Award' in the 'Best Original Song' category for 'Lose Yourself', from the movie '8 Mile'. The award was the first ever to have been presented to a rap artiste.
This exceptional rap artiste was declared the ‘Emcee of the Year’ by popular website ‘HipHopDX’ in 2010, while ‘MTV’ named him the ‘Hottest MC.
Continue Reading Below
Three years later, in 2013, the rapper won the title of 'YouTube Music Awards Artist of the Year', which was being presented for the first time. The same year, he was named the 'Global Icon' at the 'MTV EMA Music Awards'.
The following year, his 'The Marshall Mathers LP 2' won a 'Grammy' for the 'Best Rap Album', while the song 'The Monster', featuring Rihanna, bagged the award in the 'Best Rap/Sung Collaboration' category.
This artist has won the ‘Grammy’ for almost all his albums, including 'The Slim Shady LP', 'The Marshall Mathers LP', 'The Eminem Show', 'Relapse' and 'Recovery’, receiving the honour fifteen times. 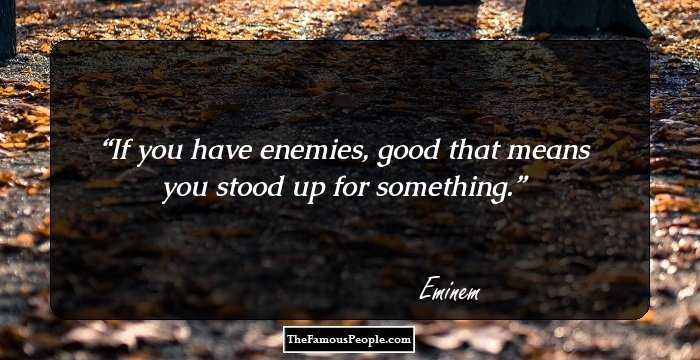 Quotes: You
Family & Personal Life
At the age of fifteen, the rapper became friends with Kimberley Anne Scott, who had run away with her sister Dawn, and was living with Eminem's mother. The two young people fell in love, and gave birth to a daughter, Hailie in 1995.
Kim and the talented rap artiste got married in 1999, but the relationship has always been turbulent, with the couple getting divorced and remarried several times.In 2000, this brilliant rapper appeared on the front page of 'The Source' magazine, becoming the first white singer to have the honour.
In 2008, the famous rapper's mother published a book titled 'My Son Marshall, My Son Eminem', which is an autobiographical account of how she raised her son, and saw his rise to fame.
The rapper has openly accepted his dependence on drugs like Valium, Vicodin, Methadone and Ambien. His addiction became so strong that on one occasion, he binged on fast food, leading to excessive weight increase. In another instance he passed out in his washroom as a result of Methadone overdose, and had to be hospitalized.
The artiste's lyrics are often considered homophobic, and he has fallen into trouble many times due to his songs, but he claims that they are just songs, and he has no objection to people being homosexuals.
This artiste has established the 'The Marshall Mathers Foundation', a charitable organization to help under-privileged young adults. The establishment receives assistance from attorney Norman Yatooma's charitable trust.
Trivia
This famous white rap artiste was arrested on several occasions, one being when he assaulted a bouncer, John Guerrera, who kissed his wife

See the events in life of Eminem in Chronological Order