Willy Brandt was the pseudonym adopted by the German youth Herbert Ernst Karl Frahm who fled to Scandinavia to escape the wrath of Hitler and his ever-rising Nazi empire only to return to Germany later on to become a prominent politician. Born in Lubeck, the future German statesman and leader of the Socialist Democratic Party suffered a poverty-stricken childhood with no father and witnessed the anguish and the sufferings of the common people firsthand. His childhood memories and the prevailing conditions edged him into entering the political scenario possibly to make a difference. The first party he joined was the Socialist Youth in 1929 before heading onto the Social Democratic Party in 1930 and finally he became a member of the more left wing Socialist Workers Party. After passing his university examinations he became an apprentice for F. H. Bertling, a shipbroker and agent. He left Germany on a ship for Norway to avoid Nazi persecution through his contacts with Bertling. After returning to Berlin after several years he joined the Social Democratic Party of Germany and served as their leader from 1964 to 1987. Another important post that he held was that of the Chancellor of the Federal Republic of Germany. German Celebrities
German Men
Male Leaders
German Leaders
German Chancellors
Childhood & Early Life
Willy Brandt was born as Herbert Ernst Carl Frahm on December 18, 1913 in Lubeck to an unwed mother, Martha Frahm, who worked as a cashier for a departmental store. He never met his father, John Moller.
Having lived a poverty-stricken childhood, he understood the necessity of bringing about drastic changes in the society and eventually became a member of the Socialist Youth (1929), the Socialist Democratic Party (1930) and the more left-wing Socialist Workers Party.
He passed his matriculation examination at the Johanneum zu Lübeck in 1932. In 1933, he fled to Norway to escape from being arrested by the gestapo (Official secret police of the Nazi Germany).
In Norway he adopted the pseudonym of Willey Brandt and ventured into journalism. In 1934, he helped in establishing the International Bureau of Revolutionary Youth Organisations return was elected to its secretariat.
In 1937, he reported as a journalist in the Spanish Civil War. Back home the German government revoked his citizenship in 1938 and he had to apply for a Norwegian citizenship. He became a Norwegian citizen in 1940; by this time he was well versed in Norwegian and Swedish languages. 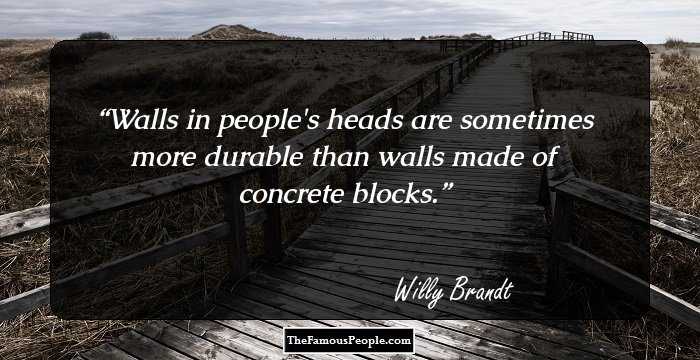 Who Is The Most Popular BTS Member?
Career
In 1946, Willy Brandt returned to Berlin as a Norwegian government employee and two years later joined the Social Democratic Party of Germany (SDP). He also adopted the pseudonym “Willy Brandt” legally and became a German citizen again.
In 1957, he was elected as the Governing Mayor of Berlin (1957–66) and the president of the Bundesrat (legislative body representing the 16 federal states of Germany at national level) in Bonn.
He became the Chairman of the SDP in 1964 but lost the chancellorship election of 1961 to Konrad Adenauer and in 1965 to Ludwig Erhard. But Erhard's government proved to be unstable and short-lived.
In 1966, the SDP and Christian Democratic Union of Germany (CDU) formed a coalition government and Brandt was appointed as the Vice-Chancellor and the Foreign Minister.
In the 1969 chancellorship elections the SDP showed improved results and formed a coalition government with the Free Democratic Party of Germany (FDP). Brandt was the lead candidate before the elections and thus was elected as the Chancellor of the Federal Republic of Germany.
As Chancellor, he adopted Neue Ostpolitik (New Eastern Policy) as his foreign policy. He chose the means of peace and rapprochement for re-building ties with East Germany, Soviet Union, Poland, Czechoslovakia and other communist countries.
On the domestic front he launched countless domestic reform programmes related to social security benefits, free hospital care, health care coverage, and extended the welfare state and broadened the social assistance programme.
Although he achieved incredible feats on the national and the international level with his policies, several of the coalition’s senior members were opposed to them. They left the coalition and joined the CDU. Willy Brandt was still the Chancellor but lost his majority in the house and as a result several of his initiatives failed.
The 1972 Chancellorship elections were won by the SPD with a landslide victory as Brandt's policies of Ostpolitik and domestic reforms proved to be a big hit with the younger generation.
Continue Reading Below
He resigned from his position as the Chancellor in 1974 in shock after learning that one of his personal assistants, Gunter Guillaume, was a spy for the East German intelligence services. However, he stayed as the Chairman of the SDP till 1987.
In 1987 he stepped down to become the Honorary Chairman of the SDP and he also served as a member of the European Parliament from 1979 to 1983.
Major Works
Willy Brandt received much acclaim for his successful efforts in negotiating a peace treaty with Poland, parallel treaties and agreements with Czechoslovakia, and his policy of rapprochement with East Germany.
Awards & Achievements
In 1970 Willy Brandt was named the Man of the Year by ‘Time’ magazine.
He was awarded the Nobel Peace Prize in 1971 for his work in improving relations with East Germany, Poland, and the Soviet Union.
Personal Life & Legacy
Willy Brandt married Anna Carlotta Thorkildsen in 1941 and the couple had a daughter named Ninja Brandt. They got divorced in 1948.
He married Rut Hansen in 1948 and had three sons: Peter, Lars and Matthias from the marriage. They got divorced in 1980 after 32 years of marriage.
His third marriage was to Brigitte Seebacher in 1983 and lasted till his death in 1992.
Willy Brandt died of colon cancer on October 8, 1992 at his home in Unkel. He was given a state funeral and was buried at the Zehlendorf cemetery in Berlin.
You May Like

See the events in life of Willy Brandt in Chronological Order