W. Edwards Deming was an American statistician, professor, author, lecturer, and consultant. He created the new quality-control methods and developed the sampling techniques for U.S. Census. He was then made a member of the five-man Emergency Technical Committee to work on the compilation of the American War Standards. He is best known for his work in Japan after the Second World War. There he taught top business managers how to improve service, product quality, testing, and sales by various means, including the application of statistical methods. His contribution to Japanese economy made him into somewhat a hero in Japan, which is why he was awarded Japan's Order of the Sacred Treasure, Second Class in 1960. Apart from that, he won the National Medal of Technology and the Distinguished Career in Science award from the National Academy of Sciences. Around the time of his death, he founded the W. Edwards Deming Institute in Washington, D.C., where the Deming Collection at the U.S. Library of Congress includes an extensive audiotape and videotape archive. The motto of the Institute is to promote understanding of the Deming System of Profound Knowledge to advance business, success, and harmony. Anita Hill
Educators #87
Electrical Engineers #19
Miscellaneous #1120
DID WE MISS SOMEONE?
CLICK HERE AND TELL US
WE'LL MAKE SURE
THEY'RE HERE A.S.A.P
Quick Facts

American Celebrities
American Men
Yale University
University Of Colorado At Boulder
Libra Engineers
Childhood & Early Life
William Edwards Deming was born on October 14, 1900 in Sioux City, Iowa, to William Albert and Pluma Irene Edwards. His father was an insurance agent and lawyer and his mother was a piano teacher.
His parents were quite well-read, his father had studied mathematics and law and his mother was a learned musician from San Francisco, which is why they always emphasized on Deming’s education.
Deming started his education at the University of Wyoming in 1917, then enrolled at the University of Colorado and then at Yale University, where he finished his studies with the Ph.D. in Mathematical Physics.
Continue Reading Below
You May Like

Who Is The Most Popular BTS Member?
Career
Deming edited a series of lectures delivered by Walter A. Shewhart of the Bell Telephone Laboratories, at USDA, ‘Statistical Method from the Viewpoint of Quality Control’, into a book published in 1939.
In the following year, he developed the sampling techniques that were used for the first time during the 1940 U.S. Census, formulating the Deming-Stephan algorithm for iterative proportional fitting in the process.
He was made the member of the five-man Emergency Technical Committee to work on the compilation of the American War Standards and taught statistical process control techniques to the workers involved in wartime production.
In 1946, Deming joined the staff at New York University’s graduate school of business administration as a professor of statistics. In the following year, he was engaged in early planning for the 1951 Japanese Census.
He became a part of the Japanese Union of Scientists and Engineers (JUSE) and from 1950, he started training hundreds of engineers, managers and scholars in statistical process control (SPC) and concepts of quality.
The Prime Minister of Japan (Nobusuke Kishi) awarded Deming Japan's Order of the Sacred Treasure, Second Class in 1960. The quotation on the medal recognizes Deming's contributions to Japan's industrial revival and its global accomplishments.
After coming back to America, Deming ran his own consultancy business from Washington D.C. and in 1980, he was featured in an NBC TV documentary, ‘If Japan can…Why can’t we?’. This invariably increased the demand for his expertise.
In 1981, he was hired by Ford Motor Company’s newly appointed Division Quality Manager, John. A. Manoogian to help Ford increase its sales. With the help of Deming’s insights, by 1986 Ford became the most profitable American auto company.
Deming's book ‘Quality, Productivity, and Competitive Position’ was published by the MIT Center for Advanced Engineering in 1982, and was renamed ‘Out of the Crisis’ later.
Continue Reading Below
In 1982, Deming along with Paul Hertz and Howard Gitlow of the University Of Miami Graduate School Of Business in Coral Gables founded the W. Edwards Deming Institute for the Improvement of Productivity and Quality.
He joined the Graduate School of Business at Columbia University in 1988 and founded the W. Edwards Deming Center for Quality, Productivity, and Competitiveness at Columbia Business School.
Deming published his final book, ‘The New Economics for Industry, Government, and Education’ in 1993, which included the ‘System of Profound Knowledge’ and the ‘14 Points for Management’.
Major Works
His work in Japan is considered as the most important contribution of his life. He taught top business managers how to improve service, product quality, testing, and sales by various means, including the application of statistical methods.
His contribution to Japanese economy made him into somewhat a hero in Japan, and he was awarded Deming Japan's Order of the Sacred Treasure, Second Class in 1960.
Awards & Achievements
Deming has been awarded accolades like: Japan's Order of the Sacred Treasure, Second Class, the National Medal of Technology, the Distinguished Career in Science award from the National Academy of Sciences, etc.
Personal Life & Legacy
Deming got married to Agnes Bell in 1922. They adopted a daughter named Dorothy together but a few years later Bell died.
In 1932, he got married to Lola Elizabeth Shupe, a teacher for mathematics and co-author of his several papers, and the couple had two children together: Diana and Linda.
Deming died in his sleep at the age of 93 in his Washington home on December 20, 1993 due to natural causes.
Trivia
For some time, Deming studied under Sir Ronald Aylmer Fisher and Jerzy Neyman at University College, London, England.
In the beginning of his career, Deming taught at different Universities and worked for the United States Department of Agriculture.
Marshall Industries CEO Robert Rodin trained with the 90-year-old Deming and his colleague Nida Backaitis. Marshall Industries' striking conversion and growth from $400 million to $1.8 billion in sales, due to Deming’s insights, was recorded in Deming's last book ‘The New Economics’, a Harvard Case Study, and Rodin's book, ‘Free Perfect and Now’.
‘Plan-Do-Check-Act’ cycle is named after him.
Recommended Lists:
Engineers #69
You May Like 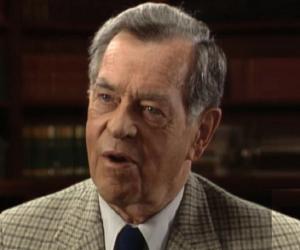