Billy Connolly is a well-known Scottish actor, musician and stand-up comedian who has won the hearts of millions through his exceptional contribution in the world of entertainment. He has received numerous awards and recognition for his work including an honorary Doctor of Letters, from the University of Glasgow. His natives in Scotland call him by the nick name, “The Big Yin”. Apart from his several appearances on Television, he has featured in numerous movies in Hollywood like ‘Water’, ‘Muppet Treasure Island’, ‘The last Samurai’ and the series, ‘Open Season’ and has entertained his fans for several decades. Well known for his observational sense of comedy, executed in his own idiosyncratic mannerism, he has often become the topic of controversy, exaggerated by the media. He started off his career as a welder in the shipyards of Glasgow but soon became well-known as a folk singer. Later on he indulged himself into full fledged comedy and established himself as an ace comedian with passing time. He has a keen interest in football and is a patron of national association of bikers with disability.
Continue Reading Below Scottish People
Actors
Stand-up Comedians
Scottish Men
Tall Celebrities
Childhood & Early Life
Billy Connolly was born on November 24, 1942, in Glasgow, Scotland to William and Mary Connolly. His father was in the army and his mother was a cafeteria worker in a hospital.
At the age of 4, he was abandoned by his mother and was looked after by his aunts.
In 1956, at the age of 14, he went to a tenement in Glasgow. He studied in St. Gerard Secondary school and passed out with an engineering qualification at 15.
In 1958, he joined the shipyards and worked there as a delivery boy as well as a boilermaker in Linthouse. 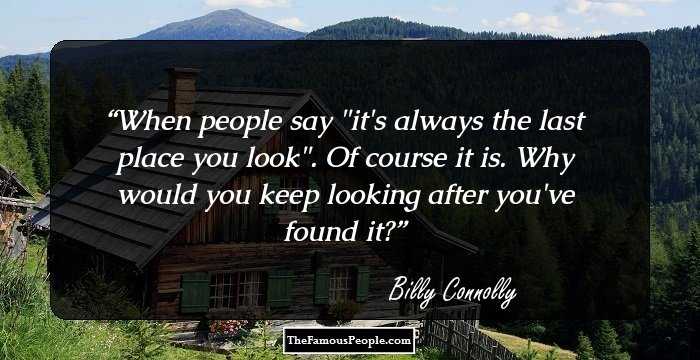 The Sexiest Men Of 2020, Ranked
Career
Billy Connolly worked in oil platform in Nigeria till 1966, before fully concentrating in folk singing. He was a duet singer with Tam Harvey in the Humblebums.
In 1972, he came to fame as a solo singer with the release of Billy Connolly Live, after which he released numerous albums of his own.
In 1975, he joined the well-known TV show Parkinson, and during the late 70s he started making television appearances as well. He continued with his musical journey at the same time with the release of some of his music albums like words and music, The Bin Yin and Anthology during this period.
He has also penned down plays like ‘Red Runner’, ‘When the Hair Was Long And The Time Was Short’ in the ‘70s.
By the 80s, he was a well-known face and started getting offers from movies as well. He appeared in Television movies like Blue Money, Weekend in Wallop, and several other talk-shows and documentaries.
His first movie was “Water” in 1985 and after that there was no looking back. However, he continued to release his albums like ‘Wreck on Tour, ‘In concert’ and others.
During the 90s, he kept on performing live concerts, as well as appearing in television and movies like Indecent Proposals, Mrs Brown, etc. He was also busy in doing documentaries for television like A Scot in the Arctic, and Sean Connery etc.
In 1996, his voice was used for well-known video games like Muppet Treasure Islands and Paws.
In 2000s, he continued doing television movies like Prince charming, and documentaries like Overnight, and continued releasing several DVDs for his fans.
Continue Reading Below
His comedy timing was impeccable and he was considered to be one of the greatest stand-up comedians of his time from 2007 to 2010.
Due to health issues, he reduced his professional assignments by 2010 but still continues to work in movies and appeared in films like The Hobbit and Brave.
In 2012, he portrayed the character of Wilf in the British comedy-drama film 'Quartet'. In the same year, he voice acted for the character of King Fergus in the animation movie 'Brave'.
In 2014, he starred in the fantasy action film 'The Hobbit: The Battle of the Five Armies' and played the character of Dáin II Ironfoot, a great dwarf warrior. 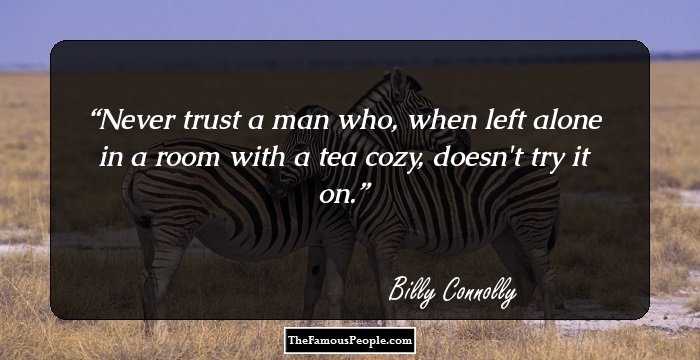 Quotes: Never, Alone
Major Works
Billy’s first album as a solo singer was Billy Connolly Live!. It established him as a singer who is close to the heart of an ordinary man.
This popular singer turned TV actor appeared in the popular interview show Parkinson, which was aired on BBC. His regular but controversial appearance in the show from 1978 till 2007 made him a star in the true sense.
His Live performance in the Freedom fest, for the birthday celebration of Nelson Mandela in the year 1988 earned him great accolades and adulation from the people of USA.
Awards
In 2003, Billy received a Lifetime Achievement Award from BAFTA and a CBE in Queen’s Birthday Honors.
Continue Reading Below
In 2006, this performer was awarded an Honorary Doctorate from the Royal Scottish Academy Of Music and Drama, Glasgow, for his unparalleled contribution in performing arts.
In 2010, the artist was awarded the honorary degree of DLitt from the Nottingham Trent University. 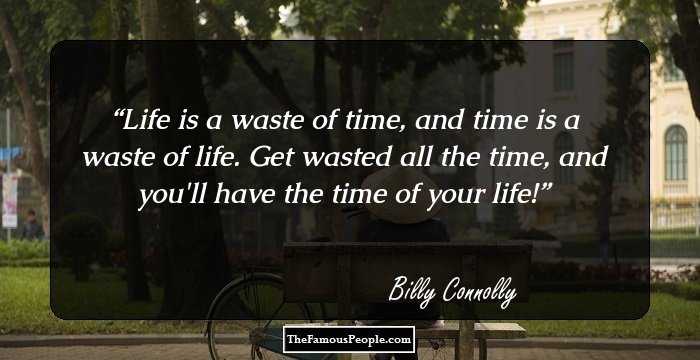 Quotes: Life, Time
Personal Life & Legacy
Billy Connolly married his first wife, Iris Pressagh in 1969 and got divorced in 1985. He has a son and a daughter from this marriage.
He married Pamela Stephenson in 1989 and has three daughters from her. She is a well-known comedy actor from New Zealand.
In 2013, he was diagnosed with early-stage prostate cancer and underwent a minor surgery for its treatment. In the same year, it was revealed that he was also being treated for early symptoms of Parkinson's disease.
In 2014, he appeared on the British genealogy documentary series 'Who Do You Think You Are?', and got to know about his Indian ancestry.
Trivia
This well-known musician has been well-known for his custom made attire on stage, the Black T-shirt with a tail, long and messy hair since 1980s.
This live performer’s use of obscene languages on stage during his talk shows or stand-up comedy shows has generated a lot of controversy.
In 2008, Billy Connolly revealed in an interview that he was sexually abused by his father between the age of 10 and 15.

Quotes By Billy Connolly | Quote Of The Day | Top 100 Quotes

See the events in life of Billy Connolly in Chronological Order 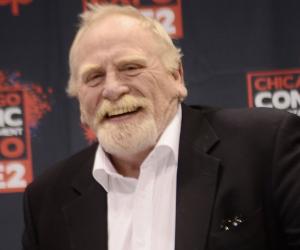