W. Clement Stone is a perfect protagonist of a rags-to-riches story. Founder of the Combined Insurance Company, he had less than a modest start in his life but did not let his financial shortcomings come in the way between him and success. A highly successful businessman and a prosperous philanthropist, he was the perfect example of how hard work couple with a positive attitude can change the fate and destiny of a man. Famous for his pencil-thin black moustache, his polka-dot bow ties and a solid fixation on motivation as the engine of success, Stone started off as a newspaper hawker when he was three. Interestingly, unlike other hawkers, he did not choose the street corners as his sell-out zones and instead concentrated on restaurants. His charming mannerism and benevolent ways impressed the buyers and his business soon thrived. He proceeded to become a salesperson in an insurance agency started off by his mother and soon turned the business profitable. Starting off with merely $100, he launched his own company that went on to become a multi-million dollar business. Throughout his life, Stone was deeply influenced by Napoleon Hill book, ‘Think and Grow Rich’ and the Bible. He even penned his own book which stated his belief that positive mental attitude was all that a person needed to rule the world. He strongly believed that no matter how poor one starts in life, a person can become wealthy by having a positive mental attitude.
Continue Reading Below American Celebrities
Philanthropists
Business People
Self-Help Writers
American Men
Childhood & Early Life
W Clement Stone was born on May 4, 1902 in Chicago, Illinois, to Louis and Anna Gunn Stone. His father was a clothing manufacturer by profession.
At a young age, Stone suffered from deep emotional crisis as his father died when he was 3 leaving the family in an impoverished state due to the losses incurred in gambling.
His mother took to working as a dressmaker, while he started hawking newspapers on Chicago’s South Side to financially aid the family. Unlike other hawkers, he started with selling newspapers in restaurants. This novel approach turned profitable for him as restaurateurs and clients were taken by his charming mannerism and politeness. By the time he turned thirteen, he had his own newsstand. 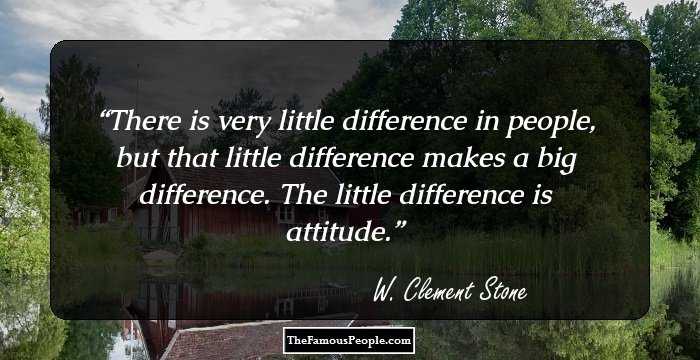 Who Is The Greatest Female Warrior In History?
Career
Three years later, he moved to Detroit, where his mother had opened an insurance agency. The business thrived well with his mother as the manager and him as the salesperson. He worked hard, going from office to office selling casualty insurance. Soon, he started earning $100 a week.
The thriving business resulted in him dropping out of high school to concentrate on selling insurance. He attained a diploma attending night classes at Young Men's Christian Association Central High School and a couple of courses from Detroit College of Law and North-western University.
By the time he turned 20, he had his own agency in Chicago - Combined Insurance Company of America – providing accident and health insurance coverage and by 1930 had rounded up 1,000 agents. Starting out with merely $100, he went on to found a multibillion-dollar insurance empire.
He wanted to pose himself as an example to the world that anyone with sheer will power and determination could attain such success but needed to have a positive attitude in life.
He practiced the principles taught in book by Napoleon Hill his greatest influence, ‘Think and Grow Rich’. Ironically, as a child, he loved to read Horatio Alger's rags-to-riches stories which he became a living example of.
Interestingly, he did not concentrate on his success alone and looked to change the life of others from dismissal state. One such person was Og Mandino, an alcoholic whose life he transformed so much so that the latter became the publisher of Success Magazine
By 1979, his company exceeded the $1 billion mark in terms of its assets. The company later merged with Ryan Insurance Group to form Aon Corporation in 1987. In 2008, the company was spun off by Aon to ACE Limitedfor $2.56 billion.
He collaborated with Napoleon Hill (the writer of the greatest inspirational book according to him), to pen the book, ‘Success Through a Positive Mental Attitude’ which was published in 1960. 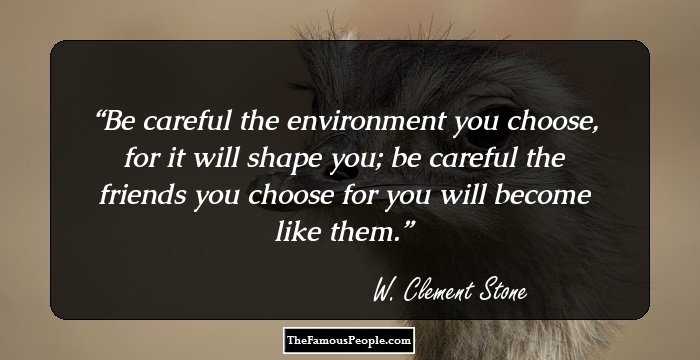 Quotes: You, Friends, Like, Will
Continue Reading Below
Awards & Achievements
He was inducted into the Horatio Alger Association of Distinguished Americans.
He was nominated for the Nobel Peace Prize in 1980 for his philosophy and his philanthropy, including the W. Clement and Jessie V. Stone Foundation.
Personal Life & Legacy
He went into the wedlock with Jessie Verna Tarson in 1923. The couple went on to have three children.
He was a great philanthropist and contributed wholesomely to various institutions and organizations. He gave more than $275 million to charity including civic groups, mental health and Christian organizations in his lifetime.
A strong supporter of the Republican Party, he contributed up to $10 million to President Richard Nixon's election campaigns in 1968 and 1972.
Additionally, he supported the Boys Clubs of America and the National Music Camp at Interlochen, Michigan. He founded the W. Clement and Jessie V. Stone Foundation to assist humanitarian efforts. The foundation also provides college scholarships.
He donated one million dollars to Rev. Dr. Robert H. Schuller for the construction on the Crystal Cathedral.
He was a supporter of The Napoleon Hill Foundation which he concentrated on for forty years. Even till date, his estate funds the foundation.
He celebrated his 100th birthday with a gift of $100,000 to the University of Illinois at Chicago. Furthermore, he provided much of the initial funding for the self-help organization, GROW.
He died on September 3, 2002, aged a little more than 100. 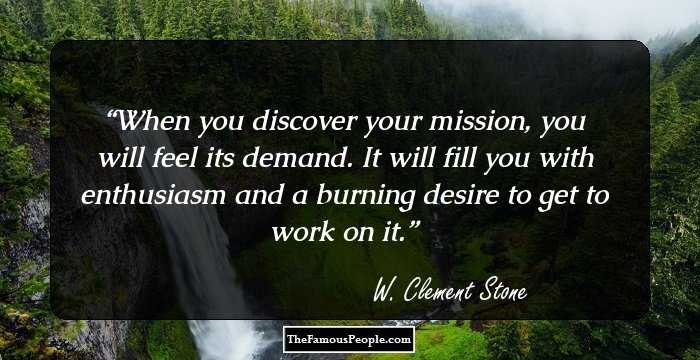 Quotes: You, Will
Trivia
This successful businessman and founder of the Combined Insurance Corp initially started his career as a newspaper hawker.
You May Like

See the events in life of W. Clement Stone in Chronological Order