Phil Alexander Robertson is an American professional hunter who invented his own duck call and founded the Duck Commander company. He also starred in the popular American reality television series ‘Duck Dynasty’ that featured lives of his family; and on the television show on hunting titled ‘Buck Commander’. Raised in a poor family of seven children, Phil got into hunting with family members to meet hunger. He obtained All-State rankings in football, track and baseball leading him to attend Louisiana Tech University on a football scholarship. There he played as first-string quarterback, however did not continue with football for duck hunting which by that time turned into his passion. He earned bachelor’s degree from Louisiana Tech and started teaching in schools. Meanwhile he obtained his master’s degree. He went through a dark phase in life including becoming alcoholic while operating a bar. According to Phil, he found Christ during such low phase of life. He discovered his own duck call, founded the Duck Commander Company which was eventually expanded into a multimillion-dollar enterprise by his third son Willie Robertson, who presently serves as its CEO. 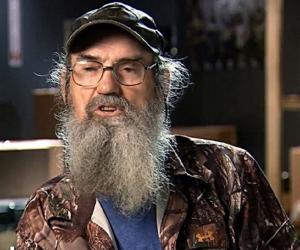 American People
Taurus Entrepreneurs
American Entrepreneurs
Taurus Men
Childhood & Early Life
He was born on April 24, 1946, in Vivian, Louisiana, US in the poor family of Merritt (née Hale) and James Robertson as their fifth child among seven.
As a child he saw his family striving to meet ends. They lived in a humble log house with no electricity, running water and toilet facilities. The family sustained themselves by raising fruits and vegetables in their garden; on the cattle, chicken and pigs they raised; and hunting deer, fish and squirrels among others. Thus hunting became an integral part of Phil’s life since his formative years.
Phil later recalled in his memoir ‘Happy, Happy, Happy’ that even though circumstances during his childhood were quite challenging the family always remained happy and although it was the 1950s, they rather led a life as if in the 1850s.
Continue Reading Below
You May Like

The Best Black Actresses Of All Time
Student Life, Football & Early Career
During high school, Phil remained a good athlete and earned All-State rankings in baseball, football and track. Such feat paved his way to study at the Louisiana Tech in Ruston garnering a football scholarship. There he played for the Bulldogs as first-string quarterback, ahead of Terry Bradshaw who went on to play professionally in the National Football League (NFL).
Phil remained starter of the Louisiana Tech Bulldogs football team in 1966 and 1967 but decided not to play the following season.
It was believed that he had potential to pursue football professionally. He was also approached by Paul Harvey to professionally play for ‘Washington Redskins’ that compete in NFL, however Phil quit the game as it interfered with his hunting endeavours.
He graduated from Louisiana Tech with a Bachelor of Arts degree in Physical Education and then started working as schoolteacher earning repute from his students.
He taught in school for years and meanwhile attended night classes to obtain a Masters of Arts degree in Education. However his passion for hunting led him to quit teaching as well and he resolved to pursue a career that would allow him to utilise his talent in hunting.
Duck Commander, Duck Dynasty & Other Endeavours
He became a commercial fisherman. He was not happy with quality of duck call available in market. He thus resolved to develop his own.
He tried creating a call that would resemble the exact call of a duck and in 1972 he invented his first Duck Commander call. He obtained its patent in 1973, the same year he incorporated the Duck Commander company. He began his business in a dilapidated boat, where he spent the next 2 ½ decades in creating duck calls using Louisiana cedar trees.
Meanwhile in 1975, he was running a bar. He went through a low phase in his life in the 1970s that included becoming an alcoholic. By that time a married man, his relation with his wife strained leading to a period of separation. He would often throw his wife and children out of home. He fell on the other side of law as well and took shelter in the woods for days to escape from clutch of authorities.
During such testing time, he happened to meet a devout Christian, whom he ignored initially. However later unable to bear problems that shadowed his life, Phil had an in-depth discussion with the person on his life and on Christ and His forgiveness. According to Phil, he went through a subsequent religious awakening that helped him to tide over his problems including reconciling with his wife.
Continue Reading Below
The family home of Phil in West Monroe, Louisiana became factory of Duck Commander from where assembling, packaging and shipping of duck calls were done. Initially Phil strived in selling the product from store to store travelling different states. Meanwhile his wife and kids operated a fishing business netting and selling fish to help run the kitchen.
With time Duck Commander was expanded it into a multimillion-dollar enterprise by Phil’s third son Willie Robertson, who presently serves as the company’s CEO. It manufactures duck calls and several duck-hunting products, and also develops deer-hunting products under brand name of Buck Commander.
The Duck Commander company as also family of Phil became subjects of the A&E aired American reality television series ‘Duck Dynasty’. The series that aired for 11 seasons encompassing 130 episodes starting from March 21, 2012 to March 29, 2017 portrayed lives of members of the Robertson family starting from its patriarch Phil, his wife Kay, brother Si, sons, daughters-in law to the grandchildren.
Duck Dynasty became extremely popular and broke several ratings records on A&E and cable television. Phil became part of a controversy in December 2013, when his comments made in a GQ magazine interview with Drew Magary were held anti-gay. This led A&E to suspend him indefinitely from the show on December 18 that year. However he was re-instated after nine days in the face of public pressure to lift such suspension.
He published a memoir ‘Happy, Happy, Happy’ in 2013 written along with author Mark Schlabach.
On the political front he endorsed Vance McAllister through a TV commercial during the 2013 special election. It was considered to have worked in part as a catalyst in McAllister’s winning the election and becoming Member of the U.S. House of Representatives from Louisiana's 5th district. Phil also endorsed Ted Cruz for President in 2016 and upon the latter’s back out from the race he endorsed Donald Trump. He also endorsed Judge Roy Moore in the 2017 Alabama run-off election for the US Senate.
Other endeavours of Phil include appearing in Steve Bannon's film ‘Torchbearer’ and serving as chairman of the ‘Fight for the Court’ project of the American Legacy Center.
Personal Life
Phil married his high school sweetheart Marsha "Kay" Carroway in 1966 after dating her since 1964. He has four sons Alan, Jase, Willie and Jep. Phil, his brother Si, and sons Jase, Willie, and Jep are known for their conservative Protestant Christian views and long beards.
A devout Christian, Phil is a member of as also elder at the White's Ferry Road Church of Christ located in West Monroe, and is quite candid on his faith and belief in the Almighty. He opposes abortion and dislikes modern technology. He is counted among the Christian conservatives in America and gets invitation every year to speak in different churches and organisations.

See the events in life of Phil Robertson in Chronological Order