Axl Rose is an American record producer, singer, songwriter, and activist. The lead vocalist of the popular band 'Guns N' Roses,' Axl has been the band's only constant member since its formation in 1985. Known for his controversial public persona, Axl is revered by millions of fans around the world, while others consider him to be a misogynistic, maniacal singer who often takes his frustrations out on his band members. Axl Rose is often ranked among music industry’s most dramatized personalities. Much of his behavioral problems are attributed to his difficult childhood. After being kicked out of home, he was arrested on numerous occasions for public intoxication. He then decided to mend his ways and became active in Los Angeles' hard rock scene. He went on to co-found ‘Guns N' Roses,’ which became extremely popular in the late-1980s and early-90s. The band’s first album ‘Appetite for Destruction’ became a hit all over the world. Subsequently, the band came up with several hit albums, such as ‘Use Your Illusion I’ and ‘Use Your Illusion II.’ After the conclusion of the band's 'Use Your Illusion Tour,' Axl disappeared from public life. For the next few years, the band did not tour or perform and no new albums or singles were released. In 2001, Axl resurfaced with new band members and ‘Guns N' Roses’ was revitalized. As a member of ‘Guns N' Roses,’ Axl was inducted into the ‘Rock and Roll Hall of Fame’ in 2012. He is rated as one of the ‘greatest singers of all time’ by NME and ‘Rolling Stone’ magazine. American People
Hard Rock Singers
Heavy Metal Musicians
American Men
Indiana Musicians
Childhood & Early Life
Axl Rose was born William Bruce Rose Jr. on February 6, 1962, in Lafayette, Indiana, USA, to Sharon Elizabeth and William Bruce Rose. At the time of his birth, his mother and father were 16 and 20 years old respectively.
When he was just two years old, his parents separated and his father kidnapped and molested him. His mother married Stephen L. Bailey and changed his name to William Bruce Bailey. He has a younger sister named Amy and a half-brother named Stuart.
He was brought up in a very religious household. His family went to a Pentecostal church and he was asked to attend services anywhere between three to eight times per week.
From an early age, he found comfort in music and performed at church services with his half-brother and sister under the name ‘Bailey Trio.’
At the age of 17, he learnt of his biological father when he went through old indemnity papers and informally adopted his birth name. Four years later, when he joined the band ‘AXL,’ he was named ‘Axl Rose’ by his band mates.
Due to his troubled past, he had developed a bad boy image. He was arrested on a number of occasions for battery and public intoxication during his early days. 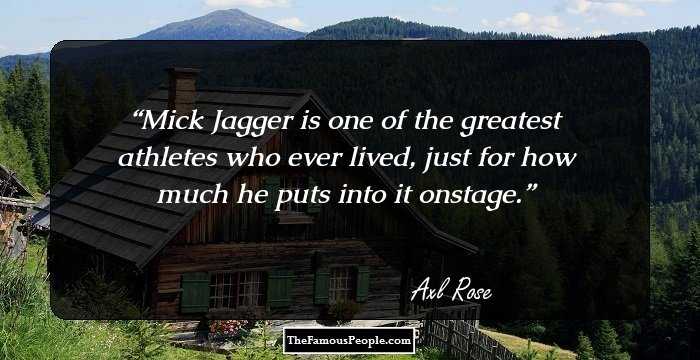 The Most Popular US Veterans
Career
After moving to Los Angeles, he joined the band ‘Rapidfire’ and recorded a demo in 1983. When the group disbanded, he joined ‘L.A. Guns’ before forming ‘Hollywood Rose’ with his friend Izzy Stradlin.
In 1985, he and former band mate Tracii Guns formed the band ‘Guns N’ Roses’ by merging ‘Hollywood Rose’ and ‘L.A. Guns.’
They played at ‘The Troubadour’ and then started appearing more frequently on the L.A. club circuit. This was when they started developing their fan base and attracted major record labels along the way. Just before signing his official contract with ‘Geffen Records’ in 1986, he legally got his name changed to W. Axl Rose
In 1987, the band released their debut album ‘Appetite for Destruction’ which became a huge success despite its slow start. The album was included in the year’s best album list and sold over a million copies in the United States alone. Over the years, the album has sold more than 18 million units in the US, becoming the best-selling debut album of all time in America.
Their fan base expanded so quickly that in 1988, during the ‘Monsters of Rock’ festival in England, two fans were crushed to death when the crowd began dancing to their hit single ‘It’s So Easy.’ From then on, Rose made it a point to request his fans to calm down. He has even halted the shows on a number of occasions to pacify the audience.
In 1988, they released the album ‘G N' R Lies’ which became extremely popular. However, it was also severely criticized for promoting homophobic attitude and prejudiced sentiments through the song ‘One in a Million.’
By 1989, ‘Guns N’ Roses’ had become one of the most popular bands in the world of rock music. The same year, he appeared solo on the cover of the prestigious ‘Rolling Stone’ magazine.
In 1990, the band was to record a follow-up of their debut album. However, the recording process was slowed down considerably due to band member Steven Adler’s struggle with drug abuse. As a result, Adler was fired and replaced by Matt Sorum. Meanwhile, Dizzy Reed also joined the band.
Despite not having an album to promote in 1991, the band embarked on a two-and-a-half-year tour titled ‘Use Your Illusion Tour.’ Rose faced criticism from audiences and critics due to his late starts or on-stage antics. The same year, the band released two albums, ‘Use Your Illusion I’ and ‘Use Your Illusion II.’
Continue Reading Below
The final show of the ‘Use Your Illusion Tour’ took place on July 17, 1993, in Buenos Aires. The show turned out to be Rose’s last performance with the band for the next seven-and-a-half years. In November the same year, the band released ‘The Spaghetti Incident?’ which was not very successful unlike their previous albums.
Throughout the 1990s, he remained a recluse and did not appear in the public. Although the group never disbanded, they did not release any new material in the ‘90s.
In 2001, he was seen at ‘Rock in Rio 3’ with a new lineup of musicians. He had fired all his previous band members without even consulting them and for ‘no reason.’
He once again disappeared from the public but not for long. In 2004, he lent his voice for the popular video game ‘Grand Theft Auto: San Andreas.’
In 2006, the band, which now had new members, went on a tour and continued to tour the subsequent year as well.
‘Guns N’ Roses’ finally released ‘Chinese Democracy’ on November 23, 2008, 15 years after their last album. For the next few years, the band toured America, Europe, and Australia. They were also seen in ‘Rock in Rio 4.’
Apart from being a constant member of ‘Guns N' Roses,’ Axl has also toured with the popular Australian rock band ‘AC/DC.’ 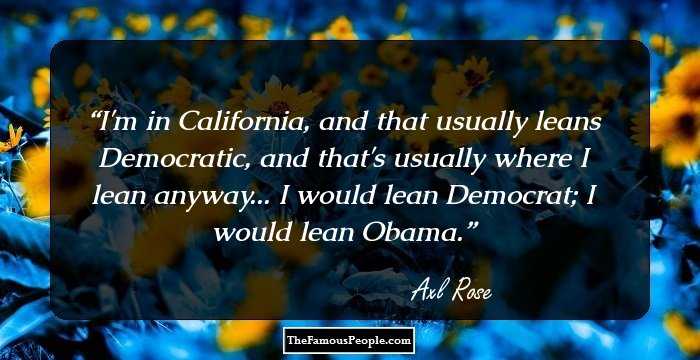 Major Works
‘Appetite for Destruction,’ the band’s debut album, released on July 21, 1987. The album was certified 18X platinum by the RIAA as it sold more than 30 million copies around the world. The album has been featured in the book ‘1001 Albums You Must Hear Before You Die’ and is still the best-selling debut album of all time in the US. The album also spent a whopping 147 weeks on the ‘Billboard 200.’
Continue Reading Below
‘G N’ R Lies,’ which released in 1988, is the second studio album by ‘Guns N’ Roses.’ The album’s single ‘Patience’ peaked at No. four on the ‘Billboard Hot 100.’ The album went on to sell five million copies in the United States alone.
Awards & Achievements
As a member of ‘Guns N’ Roses,’ Axl Rose was inducted into the ‘Rock and Roll Hall of Fame’ in 2012. 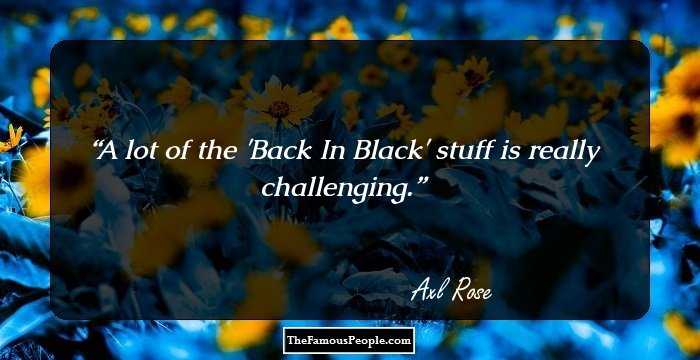 Personal Life & Legacy
In his early years, his psychotic, delinquent behavior was diagnosed as a case of psychosis by his psychiatrist. When he was 26, he was diagnosed with bipolar disorder.
In 1992, due to his troubled childhood, he underwent past life regression therapy, during which he recollected phases of sexual and physical abuse.
He was engaged nine times to Gina Siler before they separated in 1985. The following year, he began dating Erin Everly and married her on April 28, 1990. Less than a month after their wedding, the couple filed for divorce. They reconciled and Everly became pregnant. However, she suffered a miscarriage, which deeply affected Rose as he wanted to start a family with her. The duo annulled their marriage the following year.
Sometime during 1991, he began dating Stephanie Seymour, who already had a son named Dylan. Rose became extremely attached to the boy. The couple got engaged in 1993 but separated after a few weeks.
Rose has been accused of domestic violence by his former wife Everly. On the other hand, he filed a lawsuit against Seymour claiming that she ‘assaulted’ him.
Trivia
This famous lead singer of ‘Guns N’ Roses’ has defended his own cases during numerous trials.

See the events in life of Axl Rose in Chronological Order