Victor Vincent ‘Vic’ Fuentes is an American vocalist, rhythm guitarist, keyboardist, and songwriter. He is currently affiliated with the post-hardcore band ‘Pierce the Veil’ alongside his brother, Mike, who plays the drums, bassist Jaime Preciado, and lead guitarist Tony Perry. The band was formed in 2006, a few months after Vic and Mike’s previous group ‘Before Today’ broke up. ‘A Flair for the Dramatic’, their debut album was released in 2007. The group has since brought out three more albums. In October-November 2008, the group headlined a tour for the first time. It was called ‘The Delicious Tour’ and it also featured ‘Emarosa’, ‘Breathe Carolina’, and ‘Four Letter Lie’. He has also collaborated with the likes of ‘Misdelphia’ (‘Aviation’), ‘Chiodos’ (‘Love Is a Cat from Hell’), ‘Punk Goes Pop 5’ (guest vocal for the cover of Gotye’s ‘Somebody That I Used to Know’), ‘All Time Low’ (‘A Love Like War’), and ‘Slaves’ (‘Starving for Friends’). Vic Fuentes started playing guitar at the early age of 7. He and Mike began their musical journey together when they formed the band ‘Early Times’ in 1998. They released three EPs before they had to change their name to ‘Before Today’ for legal reasons. Around this point, they signed up with ‘Equal Vision Records’. The band released their only album, ‘A celebration of an Ending’ in 2004. Two years later the group disbanded. Despite that, the brothers continued to make music, and they didn’t lose the recording contract. They started a new group and named it ‘Pierce the Veil’, after a phrase Vic learned in sociology class in college. The group released their first album ‘A flair for the Dramatic’ on June 26, 2007. The Fuentes brothers then held an audition for more members; Preciado and Perry were hired soon after. Vic and Mike joined the supergroup project ‘Isles & Glaciers’ which was formed in 2008. They released their first and only EP till date, ‘The Hearts of Lonely People’, on March 9, 2010. After the release of their second album ‘Selfish Machines’ on June 21, 2010, ‘Pierce the Veil’ went on to multiple tours across America, Australia, New Zeeland, and Japan. The album reached no. 1 spot on the ‘Billboard Heatseekers Chart’.

They signed a recording contract with Fearless Records on August 23, 2011, and released ‘Collide with the Sky’ on July 17, 2012. It has since then become their most commercially successful album, emerging at number 33 in the list of ‘Rock Sound’ magazine's best albums of 2012, and winning the band many awards. On November 11, 2013, they released the DVD ‘This Is a Wasteland’, a documentary on their first world tour. ‘Misadventures’ is their fourth and the latest album which was released on May 13, 2016. Like the other albums, this one too has been received favourably by the critics. According to ‘Alternative Press’, which gave the album a 90/100 rating, “Every single track is a winner. Misadventures expertly redraws PTV’s own map, celebrating their impossible blend of ambitious, creative obsessions and the electric crackle of raw intensity". 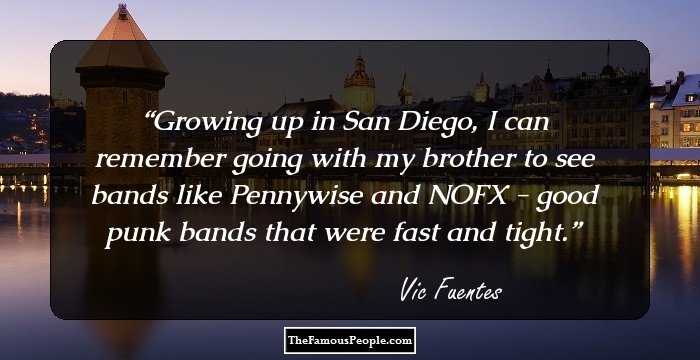 Fuentes and his band found themselves in the midst of a controversy when they allegedly brought in a second artist to recreate an original piece, ‘Escape’, made by Daniel Danger, without his explicit consent. The band initially reached out to Danger for licensing ‘Escape’ and for him to work on the layout for the artwork of their album ‘Collide in the Sky’. Danger either wasn’t available at the time or couldn’t do the job within the timeframe the band provided. The band was on a deadline with just two weeks to finalise and print a full design and layout, and apparently considering another concept was out of question. So they approached another artist for it. Ultimately however, the artwork concept was credited to Danger. 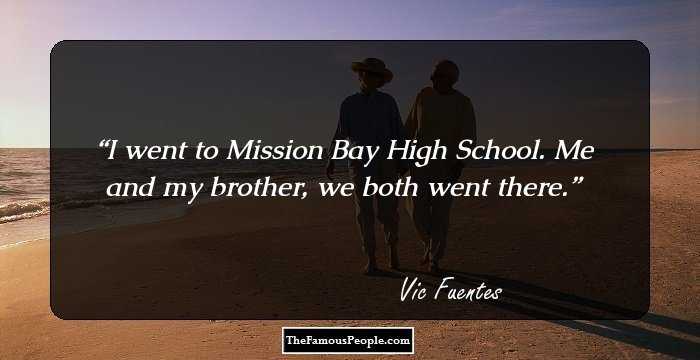 Quotes: Me, I
Personal Life

Vic Fuentes is of Irish-Mexican heritage. He was born in San Diego in California, USA on February 10, 1983. His mother is Vivian K. Fuentes. His father, Victor Gamboa Fuentes, is a former Mexican jazz musician who gave him his first lessons in music. Besides Mike, he has two half-brothers and a half-sister. He got his high school degree from ‘Mission Bay High School’ before enrolling in ‘San Diego State University’ to study graphic designing. He dropped out of college after three semesters to pursue a career in music.

He started dating model Danielle Victoria Perry who has appeared in the band’s music video for the track ‘King for a Day’. In March 2021, the couple got engaged. In April 2022, Vic and Perry got married. 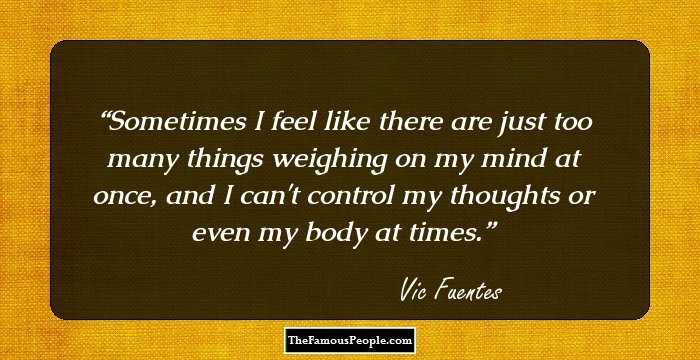 Quotes By Vic Fuentes | Quote Of The Day | Top 100 Quotes