William Blake was a famous 18th century English artist, poet and printmaker. The poet was highly inclined towards art, and was always encouraged by his parents. At the age of ten, he was sent to one of the best institutions, so that he could excel in his passion. Later, he trained under printmaker, James Basire, showing innovation and dexterity in the art of etching. He pursued his higher education in painting and illustration from the 'Royal Academy of Arts', where he became more politically and socially conscious. After his father's demise, he began working independently writing and illustrating his own poems, while also working for other famous writers. He established a new technique of engraving, known as relief etching, where the text and its illustrations were illuminated on a copper plate, using a variety of acidic and non-acidic media. Though this poet remained unappreciated throughout his life, he produced many masterpieces, like 'Songs of Innocence and Experience', and 'Daughters of Albion'. He is also famous for his illustrations, particularly his last unfinished project, which is a pictorial representation of renowned poet Dante's literary work, ‘Divine Comedy’. This distinguished writer-illustrator's works have now become the benchmarks for any aspiring artist and poet John Keats
DID WE MISS SOMEONE?
CLICK HERE AND TELL US
WE'LL MAKE SURE
THEY'RE HERE A.S.A.P
Quick Facts

British People
Artists & Painters
British Men
Male Poets
Male Writers
Childhood & Early Life
William Blake was born in Soho, London, to James, a garment manufacturer, and his wife Catherine Wright Armitage, on November 28, 1757. The young boy had six other siblings, four of them being younger than him.
The child was baptized in Piccadilly’s 'St James's Church', on December 11, 1757.
As a young boy, his parents would often buy him drawings of Greek relics, which he would sit and copy. Through this practice, he acquainted himself with the painting styles of great artists like Michelangelo and Raphael.
By the time he was ten, William's parents took him out of school, and sent him to 'Pars's drawing school', where he would be able to hone his innate talent as an artist. Otherwise, he was privately taught by his mother who instilled in him a liking for the poetry of writers like Edward Spenser and Ben Jonson.
In 1772, Blake was sent to James Basire, renowned engraver who practised at his workshop on Great Queen Street. When the apprentice turned twenty-one, he graduated as a professional, after which he took up his first assignment of making engravings inspired by the Gothic churches of London.
When he was almost twenty-two, he started attending the 'Royal Academy of Arts' in London. In this institution, he often criticized the artistic style of famous Baroque painter, Paul Rubens, thus getting into frequent trouble with portrait artist Joshua Reynolds, who was also the academy's president.
During this time, he grew close to fellow students and future artists, George Cumberland, John Flaxman, and Thomas Stothard. 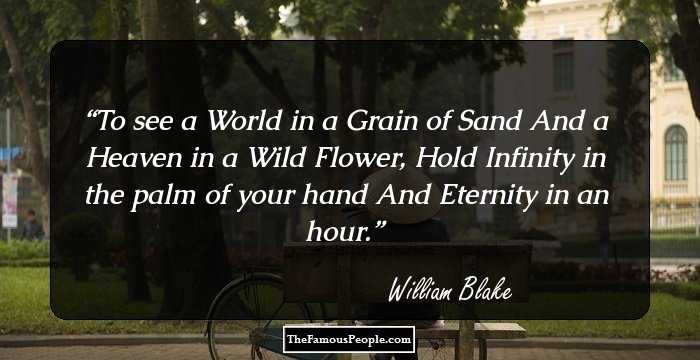 Continue Reading Below
Career
The gifted engraver and poet produced his first literary work in 1783, entitled 'Poetical Sketches', which was a compilation of poems written by him.
The following year, in 1784, he started his own workshop, assisted by fellow engraver James Parker and publisher Joseph Johnson. During this time, Blake developed extreme political views, where he condemned class division and slavery in the English society.
In 1784, William wrote 'An Island in the Moon', which remained incomplete till his death.
Eight years later, in 1788, the talented artist began using the process of ‘relief etching’ to produce his poems, accompanied by illustrations. He jotted down the poems on copper planes, and then gave it an illuminating effect.
In 1789, he wrote 'Songs of Innocence', portraying childhood through 19 timeless poetic illustrations including 'The Lamb', and 'The Chimney Sweeper'. 'The Lamb' became the symbol of innocence, drawing similarities with Jesus Christ.
William made pictorial depictions of feminist writer Mary Wollstonecraft's book, 'Original Stories from Real Life', in 1791. Though it is still a subject of speculation whether the two writers had really met, there are evidences that they had similar opinions about sexuality and marriage.
In 1793, he wrote 'Daughters of Albion', where he advocated sexual equivalence in marriage, and the rights that married women should have.
As a crusader for human rights and freedom, Blake penned 'Songs of Experience' in 1794, making the poem 'The Tyger', the focal point of the whole collection of 26 verses. The poem is considered to be related to 'The Lamb', where he asks, "Did he who made the Lamb make thee?"
From 1795-99, William produced several popular illustrations and poems, including 'The Night of Enitharmon's Joy', 'Newton', and 'A Negro Hung Alive by the Ribs to a Gallows'. The latter, is a pictorial representation of author John Gabriel Stedman's 'Narrative, of a Five Years' Expedition, against the Revolted Negroes of Surinam', showing his hatred for racial slavery.
Continue Reading Below
Later, the engraver was hired as an illustrator by poet William Hayley, for which the former had to take up residence in Felpham, then Sussex. During his stay in Felpham, in 1804, Blake began writing 'Milton', and 'Jerusalem', the second one being the closest to his heart.
For 'Jerusalem', he initially requested the assistance of art dealer Robert Cromek, expressing his intention to depict Chaucer's characters from the 'Canterbury Tales'. Cromek, instead hired William's childhood friend Thomas Stothard, leaving the enthusiastic poet disheartened and enraged.
In 1809, William exhibited his own interpretation of the concept, giving it the title of 'The Canterbury Pilgrims'. Along with the etchings, he provided a critical analysis of the famous 'Canterbury Tales', as well as its creator Chaucer. However, the display did not have many viewers, and the paintings were bought by none.
In 1826, the exceptional illustrator was given the order of creating etchings of Italian poet Dante Alighieri's masterpiece, 'Divine Comedy'. Blake relentlessly worked on it for a year, including the day he died, producing incomplete but remarkable watercolours and engravings. 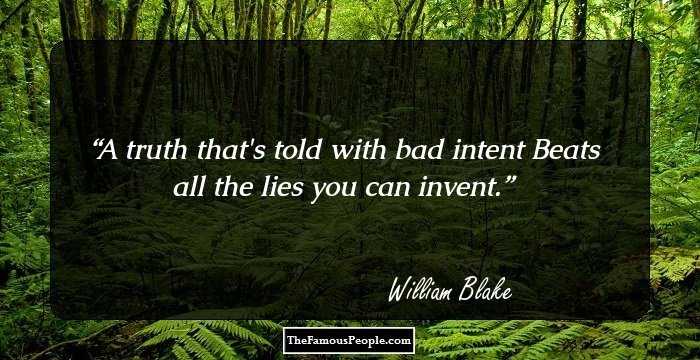 Quotes: You
Major Works
Appreciated posthumously, this poet’s creations, ‘Songs of Innocence’ and ‘Songs of Experience’ are considered the best works ever produced. They have become so popular that celebrated composers like Ralph Vaughan Williams, Joseph Holbrooke, and Jeff Johnson, among others have composed music for the poems.
Personal Life & Legacy
In 1782, Blake fell in love with Catherine Boucher while he was venting out his frustrations at being rejected by someone else. The couple got married on August 18 the same year. Catherine was taught to read and write after marriage, by her new husband. She also learnt engraving, and became a constant companion to the poet.
The prolific poet succumbed to an unknown disease on August 12, 1827, at his residence in Fountain Court, Strand. He is said to have been working on the illustrations of Dante’s ‘Divine Comedy’, and died in the evening after declaring his undying love for his wife.
Several books have been written about Blake and his poems, some of the most popular and comprehensive being 'Blake: Prophet Against Empire: A Poet's Interpretation of the History of His Own Times', by David Erdma, and 'Blake's Apocalypse', by Harold Bloom.
From 2000-2015, many exhibitions have been held in England, to showcase this illustrator's creations, the most recent being at 'The Ashmolean Museum', in Oxford. 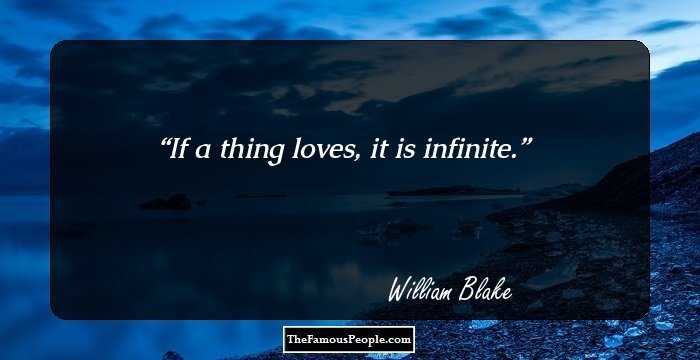 Trivia
This predecessor of the Romantic Age in English literature, was arrested on one instance in 1803, after he allegedly hurled abuses at the king and fought with a soldier, John Schofield.
This English poet is known to have seen God at a young age, along with other visions having Biblical significance

Quotes By William Blake | Quote Of The Day | Top 100 Quotes

See the events in life of William Blake in Chronological Order