Willa Sibert Cather was a Pulitzer Prize winning American writer who spent most of her life writing for various American journals, magazines and publishing her individual works. With Henry James as one of her solid inspirations, Cather wrote about human emotions with utmost emotional sensitivity, merging it with the depiction of the platonic relationship between man and his landscape. She won international fame with her war classic ‘One of Ours’, a novel inspired by the death of her cousin. She was born in Virginia and brought up in Nebraska by her businessman father and schoolteacher mother. It was in Nebraska that she did her formal schooling and eventually graduated from University of Nebraska. Soon after, her essays and fictional stories started getting published in big publications like Nebraska State Journal, The Mahogany Tree, The Hesperian, etc. She became the literary editor of The Hesperian and started her weekly column in Nebraska State Journal for years. She became one of the editorial staffs of the McClure, eventually becoming the managing editor of the firm. A lot of her stories were published in McClure in the form of series of stories before they were published as books.
Continue Reading Below American Celebrities
American Women
Women Writers
Women Novelists
American Writers
Childhood & Early Years
Willa Cather was born on December 7, 1873 to Charles Fectigue Ctaher and Mary Virginia Boak in her maternal grandmother’s farm in Back Creek valley, Winchester, Virginia. Her mother was a schoolteacher and right after Willa’s birth the family moved to Willow Shade.
IN 1883, when Cather was 9 years old, her family moved to Nebraska where her father tried his hand at farming but gave up on it and move to Red Cloud and established a real estate and insurance agency instead. It was during this period that the children attended school for the first time.
The time that Cather spent in Nebraska was a deeply formative experience for her as she was intensely moved by the environment, weather, and the various cultures of the European-American, immigrant and Native American families in the area.
She had six more siblings and it is said that she had always been closer to her brothers than her sisters.
In 1890, she graduated from the high school and went to Lincoln, Nebraska, where she entered a Latin School that prepared her for the university admission.
She matriculated from the University of Nebraska in 1891 and her teacher submitted her ‘Essay on Carlyle’ in the Nebraska State Journal without her knowledge. Later, her ‘Essay on Hamlet’ appeared in the same journal. 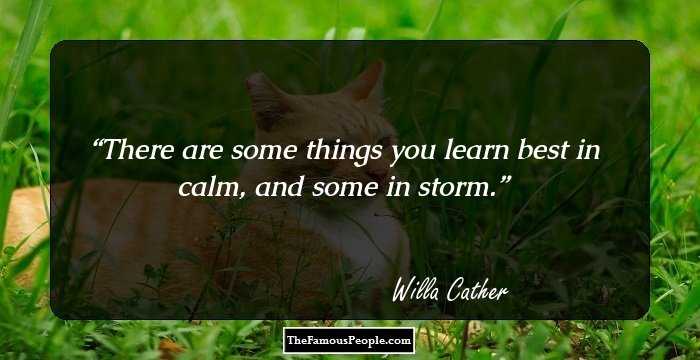 Who Is The Most Popular BTS Member?
Career
In 1892, she became the literary editor of ‘The Hesperian’ and her writings kept getting published - her story ‘Peter’ got published in The Mahogany Tree, which became her first published fiction.
While still being the literary editor at the Hesperian, she contributed her writings to the ‘Nebraska State Journal’ on a regular basis and also wrote a regular Sunday column in the journal throughout 1893.
In 1895 she was still getting published in the ‘Nebraska State Journal’, also contributing to the various publications in her university and graduated from the University of Nebraska in the same year.
She had her fiction published in ‘Overland Monthly’ and ‘Nebraska Literary Magazine’ in 1896. She moved to Pittsburg in the same year to become editor of a family magazine called the ‘Home Monthly’.
She moved back to the Red Cloud and kept making contributions to the ‘Nebraska State Journal’ and wrote for her column, ‘The Passing Show’, all through 1897. In the same year she was offered a job in the ‘Pittsburgh Leader’.
In 1900, Cather left the ‘Pittsburg Leader’ and her writings, mainly poetry, started to appear in national magazines. She was involved with ‘The Library’ for a short while and ‘Eric Hermannson’s Soul’ was published in ‘Cosmopolitan’.
She traveled abroad and sent writings about her experience for her weekly column in the ‘Nebraska State Journal’. Her stories ‘The Professor’s Commencement’ and ‘The Treasure of Far Island’ were published in ‘New England magazine’ in 1902.
Cather moved to New York and joined the editorial staff of the ‘McClure’ in 1906, for which she spent most of her time in Boston, working on a story on Mary Baker Eddy.
In 1908, she was given a promotion and made the managing editor of ‘McClure’ and her story ‘On the Gulls’ Road’ got published in the magazine. She also travelled to London for magazine’s work.
Continue Reading Below
Cather’s story ‘Alexander’s Bridge’ got published in serials under the title of ‘Alexander’s Masquerade’ in 1912. In the same year, she got the same story published in a form of book under Houghton Mifflin publications.
Another of her books, ‘O Pioneers!’ got published by Houghton Mifflin Company in 1913. Two thousand copies of the book were printed at first. She also interviewed Olive Fremstad for ‘Three American Singers’.
In 1914, her story ‘My Autobiography’ was published in ‘McClure’ in a series and in the same year it was published in the form of a book, at a cost of 1.75 US dollars per book. She also wrote ‘The Song of Lark’.
‘My Antonia’ was published by Houghton Mifflin Company in 1918. At first, 3,500 copies were published and she signed a contract with the company on the royalty terms that 15% of 25,000 copies will go to her but later it was raised to 20%.
In 1920, ‘Youth and the Bright Medusa’ was published and first 35,000 copies were printed. She went to Naples in the same year but returned to United States after a few months.
‘One of Ours’ was published with Knopf but very limited copies were printed of the novel–– only 345 copies in 1922. In the same year, she helped her parents celebrate their 50th wedding anniversary.
She got ‘Alost Lady’ published with Knopf. The screen rights of the novel were bought by Warner Brothers in 1923. The movie had Irene Rich and George Fawcett in the main lead.
In 1925, Cather published ‘The Professor’s House’ in ‘Collier’s’ magazine. The same story was published as a book with Knopf - 20,000 copies were published and in the next year ‘My Mortal Enemy’ was published with Knopf.
‘Death Comes for the Archbishop’ was published with Knopf in 1927. In the same year, she moved from her house in the Bank Street to Grosvenor Hotel in New York because her house was getting demolished for a new subway.
Continue Reading Below
She got ‘Shadows on the Rock’ published with Knopf in 1931 and got ‘Obscure Destinies’, a collection of short stories, published the next year.
From 1935 to 1937, she got ‘Lucy Gayheart’ published with Knopf and ‘Not Under Forty’, a collection of essays, was also published during the same time.
In 1940, Cather wrote ‘Sapphira and the Slave Girl’ while she was spending time at Grand Manan Island. The novel got published by Knopf in the same year and 50,000 copies of the book were printed at first. 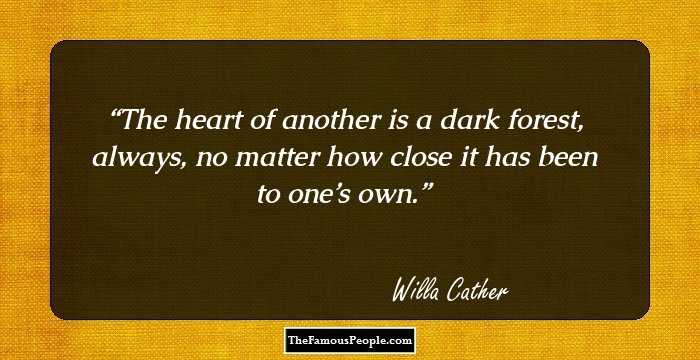 Quotes: Heart
Awards & Achievements
Cather received a Pulitzer Prize for her novel ‘One of Ours’ in 1923. The novel is set around the time of war in Nebraska. The main protagonist is shown going through moral confusion and a deep seated melancholy.
In 1944, Cather received a gold medal from the National Institute of Arts and Letters. It is institute’s highest award and is only given to the literary figures who have done great work over the years.
Personal Life & Legacy
Throughout her life, Cather was friends with women and used to be constantly in their company. Her sexual orientation is still a point of speculation for historians and intellectuals. She lived with a woman for 39 years of her life.
She started living with Edith Lewis, an editor, in 1900 and they both lived together in New York from 1908 until her death. She chose Edith Lewis as her literary trustee for her personal estate.
Cather died in 1947 due to cerebral hemorrhage at the age of 73. She is buried at a spot that she selected for herself before she died––on a hillside spot in New Hampshire.
Continue Reading Below 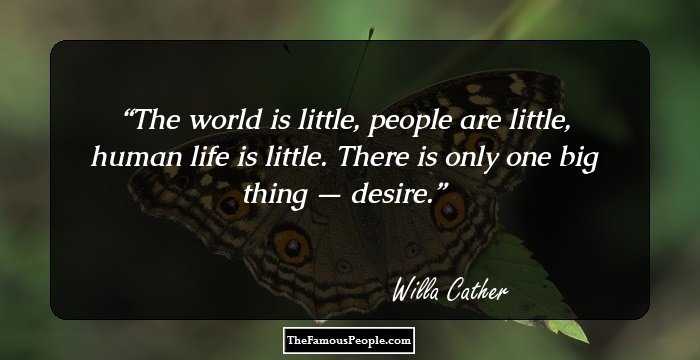 Quotes: Life
Trivia
She lived in 5 Bank Street for 15 years of her life with her partner Edith Lewis and the first time she moved into this apartment in 1912, she began writing on her autobiography.
She received an honorary degree from the University of Nebraska in 1917.
She visited Red Cloud in 1918 and read letters that her cousin G.P.Cather had written to his mother before he died at Cantigny. She made him the subject of her novel ‘One of Ours’.
She had her tonsils removed and a hemorrhage treated in 1921 and was very ill at the time. She was sent to a sanatorium in Pennsylvania to recover.
She met with Frieda and D.H. Lawrence when she was in New York in 1924.
In 1928, she received an honorary degree from the Columbia University and in 1929, from the Yale University.
It is not known if she was a lesbian but she spent most of her time in the company of various women, who influenced her life and her writings.
Cather was very influenced by the literary works of Henry James.
You May Like

Quotes By Willa Cather | Quote Of The Day | Top 100 Quotes

See the events in life of Willa Cather in Chronological Order