Wilhelm Wien was a German physicist who won Nobel Prize in Physics for his groundbreaking work in thermal radiation. He is best known for Wien's displacement law of blackbody radiation and the Wien's distribution law (also known as the Wien approximation). Regardless of the fact that he received his early education at home and was expelled from his first school for poor academics, he performed pioneering work in the field of physics. After completing his doctoral degree under the guidance of the eminent physicist, Herman Helmholtz, he became his assistant and over a period of time served as a professor of physics at prestigious universities. He conducted trailblazing research in the field of thermal radiation and proposed laws defining the wavelength-temperature relation of a body. He also defined a blackbody—a body that appears black because it absorbs all radiation and radiates heat. He was instrumental in formulating an expression for the blackbody radiation which is correct in the photon-gas limit. He received the Nobel Prize in Physics for his displacement law concerning the radiation emitted by the perfectly efficient blackbody. He also made significant contributions to the study of cathode rays, X-rays and canal rays (positively charged atomic beams). His remarkable discoveries played a vital role in the development of quantum mechanics. Horst Ludwig St...
Physicists #180
Scientists #742
DID WE MISS SOMEONE?
CLICK HERE AND TELL US
WE'LL MAKE SURE
THEY'RE HERE A.S.A.P
Quick Facts

German Celebrities
Male Scientists
Male Physicists
German Physicists
German Scientists
Childhood & Early Life
He was born on January 13, 1864 in Gaffken near Fischbach, a small town in East Prussia, to Carl Wien, a landowner and his wife, Caroline Gertz. He was their only child.
His family moved to a small farm in Drachenstein when he was a child. He was educated at home until the age of eleven. His parents hired a private tutor, who taught him to speak French.
In 1879, he was enrolled at a school in Rastenburg but was soon expelled from the school due to his poor academic performance. Later in 1880 he attended the city school in Heidelberg and graduated in 1882.
In 1882, he attended the University of Göttingen to study mathematics and natural sciences. In the same year, he also got enrolled at the University of Berlin where he received education in physics.
From 1883 to 1885, he studied at the University of Berlin under the supervision of German physicist and mathematician, Hermann von Helmholtz, and worked in his laboratory.
In 1886, he obtained his doctoral degree in physics from the University of Berlin with a dissertation on "The Diffraction of Light on Photographically Reduced Lattices."
After earning his doctorate, he returned to his family farm, which had been badly damaged by fire. Alongside studying physics on his own, he tried to restore the farm for the next four years but was forced to sell the property in 1890.
Continue Reading Below
You May Like

The Sexiest Men Of 2020, Ranked
Career
In 1890, Helmholtz appointed him as his assistant at the newly created State Physical-Technical Institute in Charlotten-burg.
From 1896 to 1899, he served as a lecturer at the Rheinisch-Westfälische Technische Hochschule Aachen University and the University of Giessen.
In 1900, he was appointed the joint professor of physics at the University of Würzburg, as the successor of Wilhelm Roentgen, another German physicist.
In 1902, he was invited to succeed Ludwig Boltzmann as Professor of Physics at the University of Leipzig and in 1906, he was invited to succeed Drude as Professor of Physics at the University of Berlin; but he refused both these invitations.
In 1913-14, he also served as the Rector of the University of Würzburg. In 1913, he visited the United States as a lecturer at the Columbia University.
In 1920, he became the professor of physics at the University of Munich, once again succeeding to a position previously held by Roentgen.
From 1925 to 1926, he was also appointed the Rector of the University of Munich. During his tenure at Munich, he oversaw the construction of a new physics institute.
He also served as the co-editor of Annalen der Physik (Annals of Physics) from 1906 until his death in 1928.
Major Works
His best-known contribution to the investigation of thermal radiation is ‘Wien's Displacement Law’, which establishes a relation between the temperature of a Planck Blackbody and the wavelength that manifests maximum radiated power. It states that wavelengths emitted from the blackbody become shorter as the temperature rises.
He also devised a theoretical basis that provided a graphical explanation of the energy distribution curve known as ‘Wien's Energy Distribution Law’. The theory worked well but only for short wavelengths. Later the theory was corrected by Max Planck for short as well as long wavelengths and termed as ‘Planck's law’, which also led to the development of quantum theory.
Awards & Achievements
In 1911, he was conferred the Nobel Prize in Physics “for his discoveries regarding the laws governing the radiation of heat”.
Personal Life & Legacy
In 1898, he married Luise Mehler, his longtime lover from Aix-la-Chapelle. They were blessed with four children; Gerda, Hildegard, Karl and Waltraut.
During his years at Würzburg, he embarked on many trips to other European countries including Spain, England, Italy, and Greece. At Würzburg, he also found the time to pursue his life-long interests in History and the Arts.
He died unexpectedly on August 30, 1928 in Munich, Germany, at the age of 64.
You May Like

See the events in life of Wilhelm Wien in Chronological Order 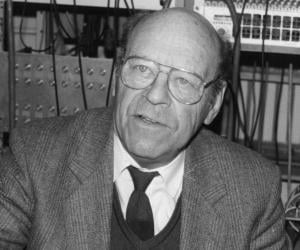