DID WE MISS SOMEONE?
CLICK HERE AND TELL US
WE'LL MAKE SURE
THEY'RE HERE A.S.A.P
Popularity Index
20
Writers #3262
Quick Facts 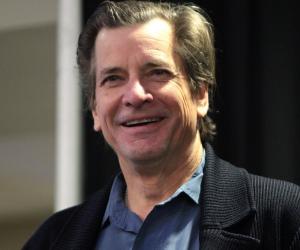 Who was Virginia Satir?

This famous personality once stated, ‘The family is a microcosm. By knowing how to heal the family, I know how to heal the world’; and so she did. Extraordinary characters often have both routine and notable backgrounds and Virginia Satir was no different. She has justifiably become one of the chief names in the archives of family therapy. During her early years, she worked in conjunction with a number of achievers including Bowen and Ackerman, while she was a member of the ‘Human Potential Movement’. She was instrumental in developing ‘family therapy’ into one of the chief therapeutic systems, which is still in use today. Some of her well-known publications include, ‘Conjoint Family Therapy’, ‘Peoplemaking’ and ‘The New Peoplemaking’. Even though her writing career was a brief one, she often indulged in poetry and enjoyed travelling, while using it as a medium to express her ideas and thoughts. She is also known for creating the ‘Virginia Satir Change Process Model’, which she developed through means of scientific studies and trial and error. This woman in question was as an innovative and independent thinker and believed that her model based on family therapy could be yoked to make life more useful, fruitful, spiritual and healthier. She is also the proud recipient of numerous awards and accolades. If you would like to learn more about this famous personality, scroll further. American Women
University Of Chicago
Northwestern University
Cancer Writers
Childhood & Early Life
Virginia Satir was born to Oscar Alfred Reinnard Pagenkopf and Minnie Happe Pagenkopf. She was eldest of the five children.
By the age of three, she had taught herself to read. At the tender age of five, she dreamt of becoming a ‘children’s detective on parents’.
In 1929, the family moved to Milwaukee, where she attended high school. This was the time of the Great Depression and in order to lessen the financial burden of her family, she decided to take up a part-time job and a number of courses, so that she could graduate early.
In 1932, she received her high-school diploma and then attended Milwaukee State Teachers College, where she paid for her course by working in departmental stores and through babysitting.
She graduated with a bachelor’s degree from college in 1936 and the following year, in order to complete graduate level education, she enrolled to Northwestern University, Chicago, while teaching simultaneously at a public school in Williams Bay Wisconsin.
She completed her graduate studies in 1943 and received her master’s degree from the University Of Chicago School Of Social Services Administration five years later, after she completed her thesis. 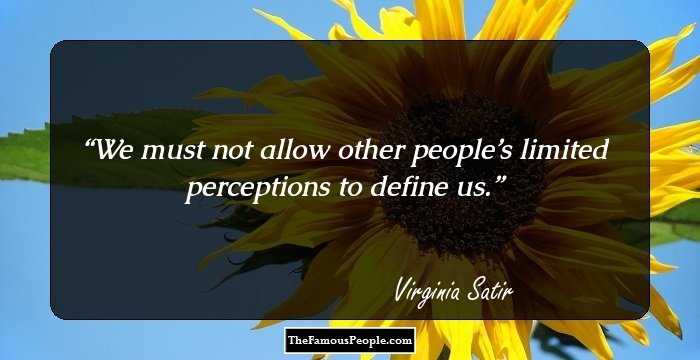 Women Writers
American Writers
American Female Writers
Cancer Women
Career
After completing her education, Satir launched her own autonomous therapy career. She met the first family in 1951 and four years later, she commenced working at the Illinois Psychiatric Institute, where she helped other therapists to focus on families rather than just individuals.
At the end of the decade, she co-founded the ‘Mental Research Institute’ in California and received a grant in 1962, wherein she was allowed to work on the first formal therapy training program. The following year, she was made the director of residential training.
In 1964, she authored her first book, ‘Conjoint Family Therapy’, which was established from the training manual she wrote for the students at the Mental Research Institute.
In 1970, she organized the group, ‘Beautiful People’, which later came to be known as ‘International Human Learning Resources Network’. Two years later, she penned the book, ‘Peoplemaking’.
In 1977, she founded the ‘Avanta Network’, which was recently renamed to ‘Virginia Satir Global Network’. The subsequent year, she was appointed to the ‘Steering Committee of the International Family Therapy Association’
Through the 80s, Satir encouraged other therapists and marriage counselors to focus on providing ‘relationship education’, which she believed were fundamental for every healthy network or organization. She also stressed upon this in her 1988 book, ‘The New Peoplemaking’; which was the last of her works before she passed away. 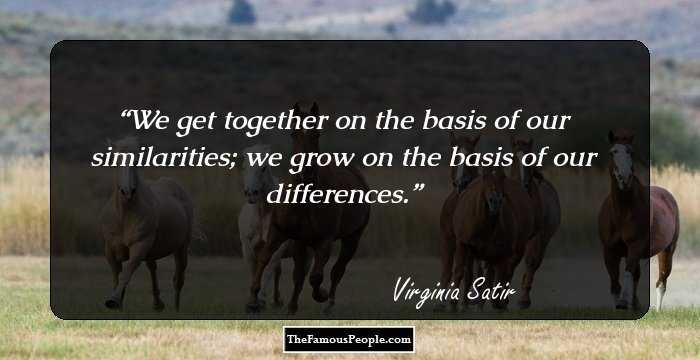 Quotes: Together
Major Works
Virginia Satir’s major works include her contributions to the theory of ‘family therapy’. She introduced and developed conjoint family therapy into the main course of therapy practices. She endorsed and developed the ‘right hemisphere’ intercessions such as comicality, trance, touch, voice tone and meditation.
Awards & Achievements
In 1976, she was presented the Gold Medal of ‘Outstanding and Consistent Service to Mankind’ from the University of Chicago.
Continue Reading Below
The West German Government selected her as one of the 12 most influential leaders in the world, in 1982.
In 1986, she was elected as a member of the ‘International Council of Elders’, a society developed by Nobel Peace Prize winners.
In 1987, she was inducted as the ‘Honorary Member of the Czechoslovakian Medical Society’.
She was voted as ‘the most influential therapist’ in surveys related to psychologists, psychiatrists and family therapists. 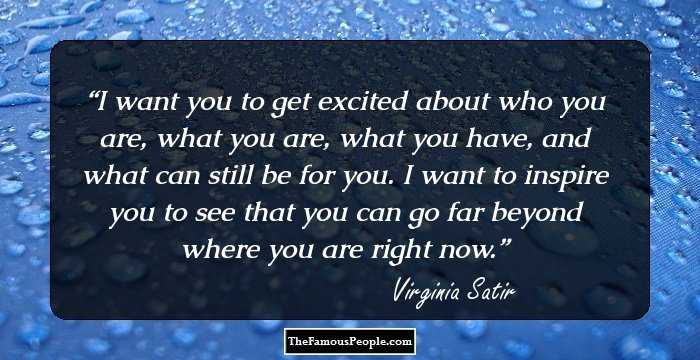 Quotes: You, I
Personal Life & Legacy
In 1941, she met a soldier at a bus station and within three weeks of their chance meeting, they were married.
He then left for Europe during World War II only to return after the war. Meanwhile, she adopted two children during his absence. Upon arriving, the two could not continue with their unison and filed a divorce in 1949.
In 1951, she married Norman Satir, a psychiatrist, who gave her the surname that would make her famous.
She passed away the year ‘The New Peoplemaking’ was published; at the age of 72.
Her work was studied by Richard Brandler and John Grinder, who used her models as one of the three vital models of NLP.
Steve Andreas authored a book on the patterns of Satir’s works in a book called, ‘Virginia Satir: The Patterns of Her Magic’, published in 1991.
Today, ‘AVANTA’ is a large organization that carries out her noble work and promotes ‘family therapy’.
Trivia
At the age of five, this famous 20th century psychotherapist suffered from severe deafness for two years because she suffered from mastoiditis.
You May Like

Quotes By Virginia Satir | Quote Of The Day | Top 100 Quotes

See the events in life of Virginia Satir in Chronological Order