Known today for her contributions to children's literature, Tove Jansson was an accomplished painter, writer and novelist in her lifetime. Born to a Bohemian, open-minded mother and an introspective, artistic father, Tove knew from a young age that she would grow up to be an artist. Raised by a proud and independent mother, she grew up free from much of the restrictions placed on women at the end of the Victorian Era. With the love and support of her family, she traveled through the capitals of Europe, studying and perfecting her artistic techniques. As war ravaged the continent, she began work on writing and illustrating a book for children, the first of a beloved series of fantastical adventures featuring an imaginary family of supernatural creatures. Jansson's books soon became recognized worldwide for their uniquely creative writing style and heartwarming drawings. Although originally scandalous, her decades-long public romantic relationship with another woman now makes her a pioneer in the burgeoning civil rights movement and a hero to many in the LGBT community. Heeding her artistic calling and independent nature throughout her career, she had a long and distinguished life in the public eye, eventually becoming one of the most celebrated authors in Scandinavian history Kelly Killoren
DID WE MISS SOMEONE?
CLICK HERE AND TELL US
WE'LL MAKE SURE
THEY'RE HERE A.S.A.P
Quick Facts 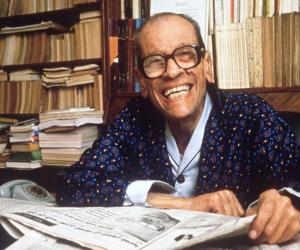 Finnish Celebrities
Cartoonists
Illustrators
Children's Authors
Finnish Women
Childhood & Early Life
Tove Marika Jansson was born in August 9, 1914 in Helsinki, then part of Grand Duchy of Finland in the Russian Empire. Her mother Signe Hammarsten-Jansson was a graphic designer and illustrator and her father, Viktor Jansson, was a sculptor.
The family belonged to the Swedish-speaking minority in Finland. Tove had two brothers, Lars and Per, both of whom also became artists and writers.
Jansson studied art from 1930 to 1933 in Stockholm, Sweden at the ‘University College of Arts, Crafts and Design’.
From 1933-1937, Jansson studied at the ‘Finnish Academy of Fine Arts’ in Helsinki, Finland. The following year, she studied at ‘L'Ecole d'Adrien Holy and L'Ecole des Beaux-Arts’ in Paris, France. 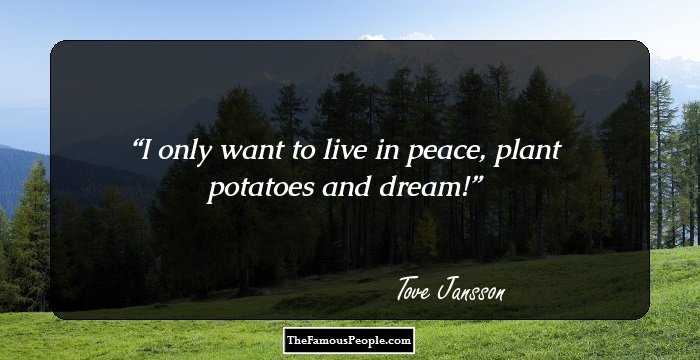 Quotes: Peace, I
Continue Reading Below
Career
Throughout the 1930s, Jansson traveled extensively throughout Western Europe, working as an illustrator for book covers, advertisements and postcards. In 1943, she had her first solo art exhibition.
In 1945, her first children's book was published, 'The Moomins and the Great Flood'. The same year, she was commissioned to paint a mural for a factory in Pitäjänmäki, Finland.
A year later, in 1946, she published 'Comet in Moominland'. The second book in the ‘Moomins’ series also became quite popular like its predecessor.
In 1948, she published 'Finn Family Moomintroll', the first of her books to achieve worldwide fame. The following year, she wrote a play based on her book 'Comet in Moominland'.
In 1950, she published 'The Exploits of Moominpappa', which was the fourth book in Moomin series. Few chapters of the book would go on to inspire the Moomin TV Series later.
In 1952, Jansson published the picture book 'The Book about Moomin, Mymble and Little My'.
In 1954, she published 'Moominsummer Madness'. The same year she was hired to paint the altarpiece for a church in Teuva, Finland.
In 1957, Jansson published 'Moominland Midwinter'. The book marked a distinct change in the narrative of the series shifting the focus to ‘Moomintroll’.
Between 1960 and 1967, she held five solo exhibitions of her paintings. She also published another book in the Moomin series titled 'Moominpappa at Sea'.
Continue Reading Below
She published the short fiction work 'The Hobgoblin's Hat'. Two years later in 1968, she released her semi-autobiographical novel 'Sculptor's Daughter'.
In 1970, Jansson published 'Moominvalley in November', the last book in her Moomin series.
From 1977-1981, she illustrated and published seven books of 'Mumin' comic strips.
She also wrote and published five novels for adults and published five collections of short stories.
In 1984, she began painting murals featuring her 'Moomin' characters for several schools in and around Pori, Finland.
In 1996, three books of Jansson's short fiction were published posthumously: 'The Invisible Child', 'The Last Dragon in the World' and 'The Secret of the Hattifatteners'.
In 2002, the novel 'The Exploits of Mooninpappa, Described by Himself' was posthumously published. 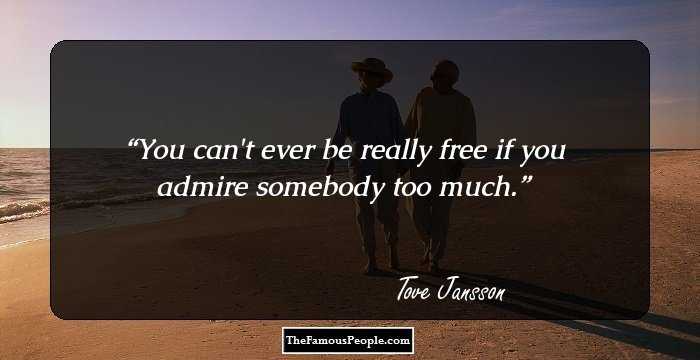 Quotes: You
Major Works
Tove Jansson is most famous for creating the 'Moomin' series of children's books and comic strips, a total of 15 works that have been translated in 45 languages and sold tens of millions of copies worldwide. The city of Tampere, Finland has a museum dedicated to the 'Moomin' characters created by her.
Awards & Achievements
Tove Jansson was awarded the ‘Hans Christian Andersen Medal’ in 1966 for her contributions to children's literature.
Jansson was awarded the ‘Order of the Smile’ in 1975. 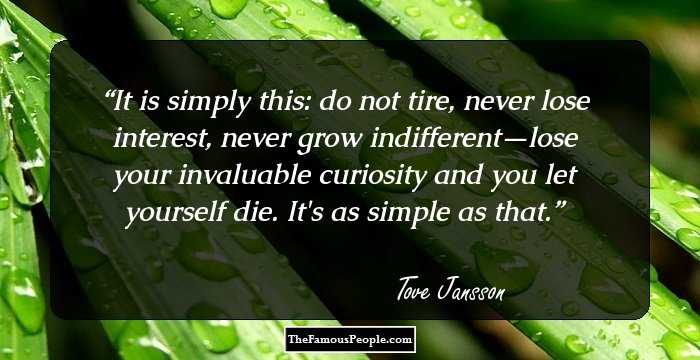 Quotes: You, Never, Yourself
Personal Life & Legacy
Jansson passed away on June 27, 2001 at age 86, after a lengthy and respected career in the visual and literary arts. Although she was briefly engaged to marry a man, she maintained a romantic partnership with Tuulikki Pietilä from 1956 until her death.
Trivia
Although it was not published until 1933, Jansson wrote her first story 'Sara and Pelle and the Water Sprites's Octopuses' when she was just 14 years old.
In 2004, a 10-euro commemorative coin was struck in Finland to honor Jansson. Jansson has stated that the original inspiration for her 'Moomin' characters was the German philosopher Immanuel Kant
Recommended Lists:
Illustrators #11
Writers #1012
Artists & Painters #171
Media Personalities #1030

Quotes By Tove Jansson | Quote Of The Day | Top 100 Quotes

See the events in life of Tove Jansson in Chronological Order