2011 - British Fashion Award for Designer of the Year

Who is Victoria Beckham?

Victoria Caroline Beckham, popularly known as ‘Posh Spice’, is a former member of the largest English girl band, ‘Spice Girls’. Although her musical career with the ‘Spice Girls’ gave a nudge to her successful image but it is her own hard work as an entrepreneur and a fashion designer that has made her 52nd richest woman in Britain, one of the 100 most powerful women in the UK and 19th richest person in the UK along with her famous soccer star husband, David Beckham. She was born and brought up in an upper middle class environment and her aspiration to have a musical career was fulfilled by her parents by encouraging her to study acting, music, dancing and modeling. Beckham is not just a pop artist, a business woman and a fashion designer but also a writer of two bestselling books. She is a successful owner of a denim line, fragrance line, sunglasses collection and posh and expensive line for classy dresses, which stars like Gwyneth Paltrow and Cameron Diaz were noticed donning.
Recommended Lists: Pop Singers
Business Women
Fashion Designers
Rhythm & Blues Singers
Childhood & Early Life
Victoria Beckham was born on April 17, 1974 at the Princess Alexandra Hospital in Harlow, Essex, England, to Jacqueline Doreen and Anthony William Adams. Her father was an electronic engineer and her mother was an insurance clerk and hairdresser.
Victoria was brought up in Goffs Oak, Hertfordshire, where her parents had a wholesale business of electronic items. It provided a posh upbringing for her - a fact for which she was bullied at St. Mary’s High School.
To encourage Victoria to pursue her passions, her parents enrolled her at the Jason Theatre School. She later got admission into the Laine Theatre Arts academy in Surrey, where she studied dance and modeling. 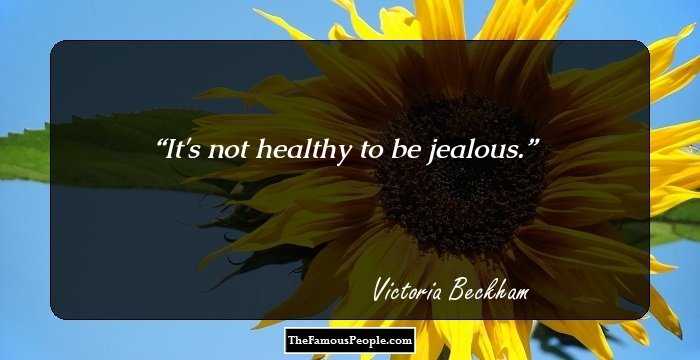 British Women
Aries Models
Aries Singers
Female Models
Career
In 1993, Victoria was selected for ‘Spice Girls’, along with Geri Halliwell, Emma Bunton, Melanie Brown and Melanie Chisholm. She was chosen to be a part of the band out of the 400 girls who auditioned.
The group was put together by manager Chris Herbert but the girls wanted more creative control and soon broke off with him. In 1996, ‘Spice’ was released and its hit single ‘Wannabe’ became a top dancing number in 29 countries.
After selling 20 million copies of ‘Spice’, ‘Spice Girls’ released their second album, ‘Spiceworld’, in 1997. The album did not do as well as the first one, even though they came up with a movie with the same title.
In 2000, Spice Girls again attempted for commercial success with their third album, ‘Forever’ but unfortunately the album bombed pretty badly commercially and it led to their band break up and Victoria started to concentrate on her solo career.
In 2000, Beckham released her solo number, ‘Out of Your Mind’ but she was outsold by Spiller’s number. The same happened when she released her second solo, ‘Not Such An Innocent Girl’ as Kylie Minogue’s number outperformed it.
In 2001, she released her autobiography, titled, ‘Learning to Fly’. It climbed to the top of the bestsellers list in the UK. It had stories of her childhood, ‘Spice Girls’ and her marriage to David Beckham.
Beckham’s next single with Virgin Records was ‘A Mind of Its Own’, released in 2002, but it failed to top the charts which fired the rumors that Beckham was to be dropped by the label.
In 2003, she was scheduled to release ‘Come Together’ in the States by Fuller and Dash. But the album was shelved due to creative difference between the two partners. She became the face of an urban clothing line, ‘Rocawear’.
Beckham turned to television in 2004 when she came out with a reality television series featuring herself and her husband ‘The Real Beckhams’. It was a reality series on their life as a couple.
Continue Reading Below
In the same year, Beckham partnered with Rock & Republic and released her premium denim line, ‘VB Rocks’. She also released her individual line of sunglasses and his-and-her fragrance line called ‘Intimately Beckham’.
In 2006, she released her second book ‘That Extra Half an Inch: Hair, Heels and Everything in Between’. It was primarily based on her talent as a fashionista, consisting of style tips from the diva herself, making it a bestseller.
In 2007, Beckham moved to the states with her family as her husband signed a deal with MLS’s Los Angeles Galaxy. Beckham used this opportunity and starred in her own NBC Special, ‘Victoria Beckham: Coming to America’.
‘Spice Girls’ reunited and did an 11-show world tour. Their greatest hits album was also released and Beckham at the time made a statement saying that ‘this will be it and she has to concentrate on her family’.
In 2008, Beckham for the first time released her very own dress collection. Her growing interest in fashion and personal feminine taste was the reason why she launched a ‘silhouette enhancing’ collection of dresses.
Beckham again re-united with ‘Spice Girls’ for a performance at the London Games. She was very happy to be a pop star again and tweeted saying “I was a pop star for the night”. 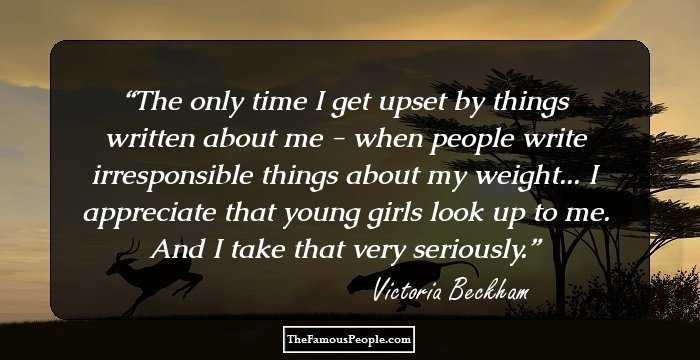 Briton Models
Women Singers
British Singers
Aries Pop Singers
Major Works
Although we known Victoria Beckham as a Spice Girl, which is how she became popular, but she is not just a pop artist now. Beckham has quite successfully made a career in fashion with her sunglasses line, perfume and dress collection.
Recommended Lists:

Female Pop Singers
Aries Entrepreneurs
British Pop Singers
British Fashion Industry
Awards & Achievements
Beckham is the winner of two British Glamour Magazine awards in 2007. Both the awards celebrate her achievements as a fashionista. She has also been named as ‘one of the 100 most powerful women in the UK’ by Woman’s Hour. 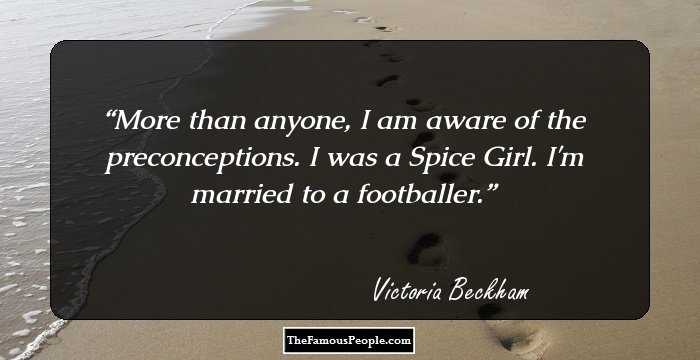 British Female Models
Briton Business Women
British Women Singers
British Entrepreneurs
Personal Life & Legacy
In 1999, Beckham married the famous English football player, David Beckham, after dating him for some two years and the birth of their first son, ‘Brooklyn’. They were married at Luttrellstown Castle in Ireland.
The couple has four children together - Brooklyn Joseph, Romeo James, Cruz David and Harper Seven. Elton John and David Furnish are godparents of Brooklyn and Romeo and their godmother is British actress Elizabeth Hurley.
Recommended Lists:

Women Fashion Designers
British Fashion Designers
British Women Pop Singers
Female Rhythm & Blues Singers
Trivia
David Beckham’s personal assistant, Rebecca Loos, publically claimed her affair with him and soon after the scandal came out, a string of women came out with stories and proofs of their alleged affairs with the football star. Victoria still decided to remain in her marriage as she said ‘She loves him deeply’.
Beckham has been friends with actress Katie Holmes and was often seen shopping with her at the Barney’s. She also became her stylist for her shoot for Harper’s Bazaar in 2006.
She has been featured on the covers of British Vogue, Indian Vogue and Russian Vogue.
She publicizes her anti-fur belief, which has made her famous with many animal rights organizations, including PETA.
Recommended Lists:

Quotes By Victoria Beckham | Quote Of The Day | Top 100 Quotes

See the events in life of Victoria Beckham in Chronological Order