Advanced Search
Katherine Anne Porter was a distinguished American journalist, essayist and a short story writer. After a difficult childhood and an abusive first marriage, she began to work in Chicago as an actress. She had to endure a period of ill health during this period, but began writing for various newspapers. Working in Mexico, she developed a respect for the Leftist movement, and was skeptical about religion. However, she became a Roman Catholic towards the end of her life. She had begun writing during her illness and her first story, ‘Maria Concepcion’, was published in the Century magazine. ‘Flowering Judas and Other Stories’, ‘Pale Horse, Pale Rider’, and ‘The Leaning Tower and Other Stories’ were three collections of novellas (or short novels as she preferred to call them) that she penned. ‘Ship of Fools’, her only novel, reflected her trip to Germany, and was critical of the society for allowing the growth of Nazism. Her volume of writing reduced drastically afterwards. She was awarded a Pulitzer and National Book Award for Collected Stories. Her works reflect her rebellious personality. Though not a very prolific writer, her works have become classics for their treatment of gloomy themes such as treachery, death and evil, which cut across space and time. American Celebrities
Novelists
Journalists
Short Story Writers
American Women
Childhood & Early Life
Born on May 15, 1890 as Callie Russell Porter, Katherine Anne Porter’s mother Mary Alice died when she was 2 years old. Her father Harrison Boone Porter left his four children with their paternal grandmother in Kyle, Texas.
Her grandmother raised the siblings, but died when Callie was eleven. The children stayed with relatives. She did her schooling in free schools in Texas and Louisiana, and could not study beyond grammar school.
In 1906, she married John Henry Koontz, who belonged to a rich family. The marriage was an unhappy one, as she was subjected to violence by him, and ended in divorce nine years later. 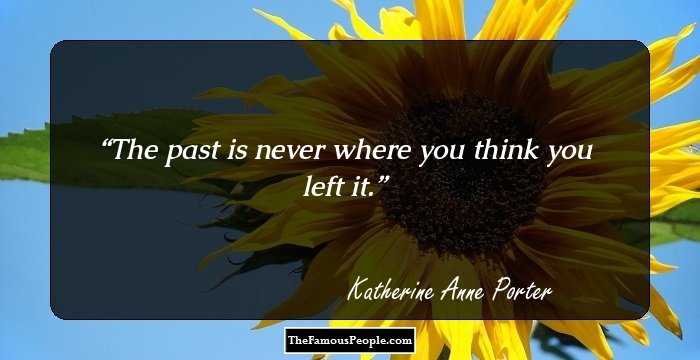 Quotes: You, Think, Past, Never
Continue Reading Below
Career
In 1915, Callie fled to Chicago and began working as an extra in movies. Returning to Texas, she assumed the name Katherine Anne Porter to satisfy her divorce order.
Between 1915 and 1918, she was diagnosed wrongly with tuberculosis, when she had bronchitis. She contracted flu which left her weak. She wrote for ‘The Critic’ and ‘The Rocky Mountain News’ during the time.
In 1919, she transferred to Greenwich Village in New York City. There, she sustained herself by ghost writing and writing children's stories. She worked for a motion picture company as a publicity person.
In 1920, she worked for a magazine in Mexico. She admired the Mexican Leftist movement initially, but, later became disenchanted. Her cynicism towards religion also changed in the last years of her life.
In the next decade, she published numerous short stories. 'Maria Concepcion’, her first published story, featured in ‘The Century Magazine’. In 1930, her first book, ‘Flowering Judas and Other Stories’ met with moderate success.
‘Pale Horse, Pale Rider’, a collection of three short novels –’Old Mortality,’ ‘Noon Wine’ and ‘Pale Horse, Pale Rider’, was published in 1939. The title of the novel reflects her struggles during the influenza epidemic.
‘The Leaning Tower and Other Stories’, published in 1944, consists of five short novels – ‘The Old Order’, ‘The Downward Path to Wisdom’, ‘A Day’s Work’, ‘Holiday’, and the title story, ‘The Leaning Tower’.
Her short stories brought her critical acclaim. Neither prolific nor commercially successful, she survived on grants and loans. She also lectured at the Universities of Stanford, Michigan, and Texas.
Between 1948 and 1950, ‘Noon Wine’, ‘Flowering Judas’ and ‘Pale Horse, Pale Rider’ were enacted as radio dramas. She commented on the literary works of Rebecca West and Virginia Woolf on radio and television.
Continue Reading Below
In 1977, she wrote an account called ‘The Never-Ending Wrong’ of the trial and execution of the Italian anarchists Sacco and Vanzetti, which had scandalized the international community. She defended the two accused again. 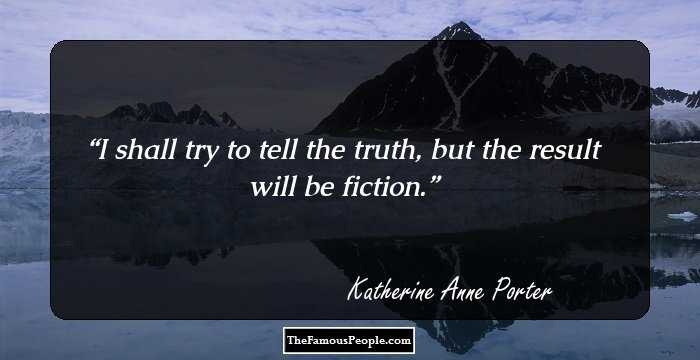 Quotes: Will, I
Major Works
The novel, ‘Ship of Fools’ (1962), based on her ocean cruise to Germany, received critical praise. The work is distinct because it is both allegorical and metaphorical.
‘The Collected Stories of Katherine Anne Porter’, published in 1965, won two major awards. It consists of nineteen "short stories and long stories”. She did not like to term her short stories ‘novellas’.
Awards
In 1966, she won two significant awards for ‘The Collected Stories of Katherine Porter’ – the Pulitzer Prize for Fiction and the National Book Award. She was nominated three times for the Nobel Prize in Literature.
She was honored with a Gold Medal Award for Fiction by the American Academy of Arts and Letters in 1967, and the biennial Katherine Anne Porter Award was also instituted by the academy. 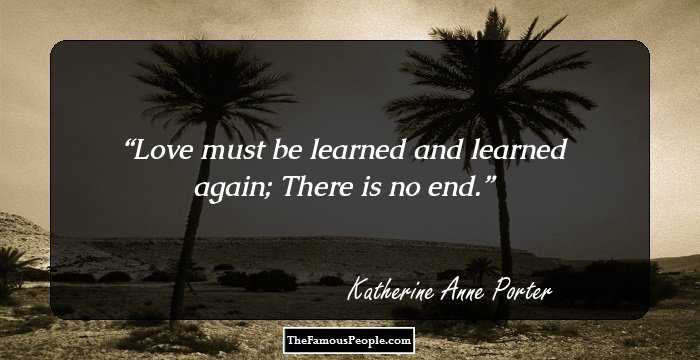 Quotes: Love
Personal Life & Legacy
Porter married four times – her spouses at different times were Koontz, Ernest Stock and two men much younger to her, Eugene Pressley and Albert Russel Erskine. She claimed to have married poet Hart Crane.
She endured many miscarriages, a stillbirth, and an abortion between 1910 and 1926. She is supposed to have contracted gonorrhea from Stock and underwent a hysterectomy, ending her hopes of motherhood.
She died on September 18, 1980 at 90, in Silver Spring, Maryland. Her ashes were buried at Indian Creek Cemetery in Texas. In 2006, she was featured on a United States postage stamp.
Trivia
According to this American writer, “To be nobody but yourself in a world that's doing its best to make you somebody else is to fight the hardest battle you are ever going to fight”.
Recommended Lists:
Essayists #53
Writers #1131
Media Personalities #2046