Anthony Richard Pulis is a football manager and retired professional footballer from Wales. He has played over 300 matches for various clubs during the time he was a player. Originally from Newport, he earned his coaching badge when he was 19 years old. Two years later, he obtained his UEFA 'A' licence and is one of the youngest professional players ever to do so. In 1992, Pulis began his managing career in Bournemouth. He was there for the next two years before joining Gillingham in 1995. In the ensuing years, Pulis has managed Bristol City, Portsmouth, Stoke City, Plymouth Argyle, Crystal Palace, West Bromwich Albion, and Middlesbrough. Throughout his managerial career, Pulis has accumulated a reputation of achieving desired results despite working with limited budgets. He has managed to keep the impressive record of never being relegated as a player, coach or manager. An ardent admirer of the Italian style of football, he has expressed his annoyance about his own reputation as a survival expert. Welsh People
Welsh Men
Male Sportspersons
Welsh Sportspersons
Welsh Football Players
Childhood & Early Life
Born on January 16, 1958, in Pillgwenlly, Newport, Wales, Pulis is the son of Jean and Angelo Pulis. His father was a steelworker. He has several siblings, including a brother named Ray.
He started his career as a footballer at Bristol Rovers, where he received training at their school of football excellence in Eastville. In later years, Pulis credited his time at Eastville for providing him with the ideal foundation for his career as a footballer as well as a manager.
Continue Reading Below
You May Like

Who Is The Most Popular BTS Member?
Career As A Footballer
During his playing days, Pulis was a defender. Between 1975 and 1981, he played 85 matches for Bristol Rovers, scoring three goals. He spent the 1981-82 season at Happy Valley before returning to Bristol for two seasons between 1982 and 1984. Pulis appeared in 77 matches for Newport County between 1984 and 1986.
In 1986, he began his first tenure at Bournemouth. In the ensuing three seasons, he played 74 matches and scored three goals. For the 1989-90 season, he was affiliated with Gillingham. He spent the last two seasons (1990-92) of his career at Bournemouth as a player/coach, appearing in 16 matches and scoring one goal.
Career As A Manager
In 1992, Pulis became the manager of Bournemouth, after the previous manager, Harry Redknapp, left the club. In the two seasons (1992-94) he spent there, Bournemouth was ranked 17th both times in the league table.
In 1994, Pulis resigned from Bournemouth to accept a managerial job at Gillingham. Under his guidance, Gillingham became the Third Division runner-up in 1995-96. That season, he received the Third Division Manager of the Year award.
He guided the team into the 1999 Second Division playoff final, where the Gills were defeated in a penalty shoot-out by Manchester City. Following this, Pulis was fired, which prompted him to sue Gillingham chairman Paul Scally for unpaid bonuses. The lawsuit was later resolved out of court.
His next employer was Bristol City. However, he remained there for only six months before signing a three-and-a-half-year contract with Portsmouth, who gave him a four-month leave so he could settle the lawsuit with Gillingham. Ten months after he took the managerial post at Portsmouth, he was sacked for underachieving.
After the firing, Pulis did not work for the next two years. In November 2002, Pulis replaced Steve Cotterill as the manager of Stoke City. His primary job was to help the team retain its position in the first division. He was successful in that regard, after a 1-0 victory over Reading.
In the 2003-04 season, Pulis guided Stoke to an 11th position finish. In the season after that, Stoke finished at the 12th position. In June 2005, he was fired for not accepting foreign players into the team.
In September 2005, he started working for Plymouth Argyle. At the time, the club was placed right above the relegation zone. Pulis helped Plymouth gradually rise in the league rankings and led them to a very respectable 14th place finish.
He returned to Stoke City in 2006 and managed that team until 2013. During his tenure, Stoke became the runner-up in the 2007-08 Football League Championship and the runner-up in the 2010-11 FA Cup. Under his stewardship, Stoke was promoted to the Premier League, the highest level of English football.
In the 2013-14 season, Pulis briefly managed the Premier League club Crystal Palace. During this period, he was named the Premier League Manager of the Month in April 2014.
He won the accolade of being named the Premier League Manager of the Month once more in February 2015, while he was the manager of West Bromwich Albion. He was also awarded the 2013-14 Premier League Manager of the Season.
He served with West Bromwich Albion for two seasons between 2015 and 2017. From 2017 to 2019, he was the manager of Middlesbrough. Pulis became an inductee into the LMA Hall of Fame in 2016–17.
Family & Personal Life
Tony Pulis exchanged wedding vows with a woman named Debs in 1982. They have two children together, a son named Anthony and a daughter named Stephanie.
A devout Catholic, Pulis regularly goes to the church.
In 2009, he was granted an honorary degree by the University of Staffordshire.
You May Like

See the events in life of Tony Pulis in Chronological Order 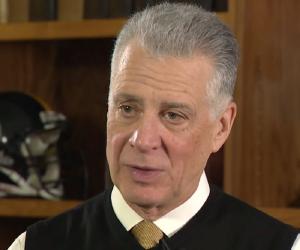