Advanced Search
Bill Shankly took the long walk from humble beginnings in an obsolete mining village to the annals of football. Surviving the harsh conditions of his Glenbuck village, he took to football had been capped eleven times for the Scottish team. As a player, he joined ‘Carlisle United’, an English club based in Carlisle, Cumbria. Later, he played for ‘Preston North End’, a club in Preston, Lancashire that won the ‘Football Association Challenge Club’ or FA Cup. Following his service in the ‘Royal Air Force’ during Second World War, he retired from playing as he was ageing, but instead of quitting the game, he started working as football manager. He worked for Carlisle and a few other clubs before being appointed as the team manager of Liverpool. After taking charge of Liverpool, he worked hard to revive the club, which had been in a deteriorating condition with poor training facilities and under trained staff. Shankly and his team turned the situation around, and soon, the team brought home many victories including FA and UEFA cups. After managing Liverpool for fifteen years, he retired from the post of football manager. He passed away seven years later, entrusting the reins of responsibility in the hands of his assistant, Bob Paisley. Alan Hansen
2nd September In History
DID WE MISS SOMEONE?
CLICK HERE AND TELL US
WE'LL MAKE SURE
THEY'RE HERE A.S.A.P
Quick Facts

Scottish Celebrities
Scottish Men
Scottish Coaches
Male Sportspersons
Virgo Football Players
Childhood & Early Life
Shankly was was born in the mining village of Glenbuck, Scotland, to Barbara and John Shankly. His four brothers were John, Bobby, Jimmy, and Alec; his five sisters were Netta, Elizabeth, Isobel, Barbara, and Jean.
Bill’s father was a tailor and also a strong trade unionist, which inculcated socialist beliefs in young Bill. His mother had keen interest in football as two of her brothers played professionally, and had moved to England.
He attended the local village school that hardly had any infrastructure. He played football with his school friends in the narrow strip of land that doubled as playground, often hurting themselves on the hard ground.
In 1928, at the age of 14, Shankly left school and started to work at the colliery for meagre wages. He worked at the pit top for six months, after which he was sent to work at the pit bottom where heavier work awaited him. 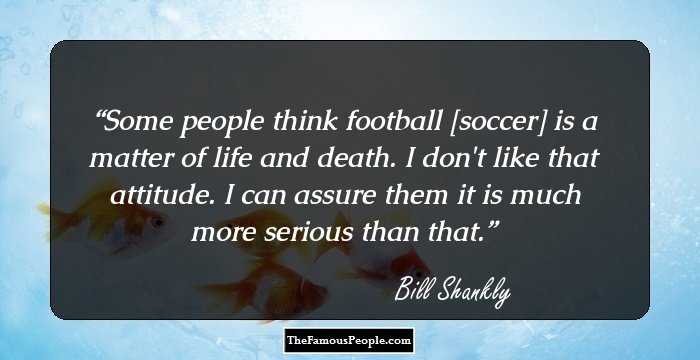 Quotes: Life, Death, Think, Like, I
Continue Reading Below
Career
At 20, Bill Shankly was a swarthy, energetic and dedicated player at Carlisle United, and was a non-smoker, teetotaller and fitness freak. In 1933, he was transferred to Preston North End for �500 where his career blossomed well.
He formed a great partnership with fellow footballer Robert Kelly, who was also an international player. Together, they revived the club’s performance, and raised it to the status of first division.
In the 1933-34 season, he made his debut and was assessed as a player with tenacity and boundless energy. He was praised for his dedicated play and was adjudged as a player who was full of new ideas for good football.
In the season 1936-37, Preston North End club reached the finals of the ‘FA Cup’ but was defeated. However, Shankly’s team recovered and came back with a bang in the next year’s session and won the cup, and finished third in the league, putting him at the pinnacle of his career.
In the period 1938-43, he also represented his country, Scotland, in twelve matches. He played with utmost dedication, and his best and his only goal for Scotland came at Wembley stadium where he made a 50 yard shot to the goal.
League football restarted after the Second World War and in the 1946-47 season, Shankly was retained by ‘Preston North End’. But he was already 33 years old– too old to be on the playing side.
He resigned as player from ‘Preston” and joined ‘Carlisle United’ as manager, in the year 1949. His resignation from ‘Preston’ was met with some criticism from other members, and he was refused a chance to play a benefit match, which was a big let-down for him.
As the manager of ‘Carlisle United’ from the year 1949 to 1951, he changed the work ethics and took the team from the fifteenth position to the third. His statistics at ‘Carlisle United’ boasted of 42 wins and 22 losses from 95 matches.
Bill Shankly joined as manager of Grimsby Town in 1951 pulling the team out of their rut and putting them on a winning streak. Here, his statistics recorded 62 wins and 35 losses from 118 matches played.
Continue Reading Below
He joined Workington in 1954 and worked with dedication to lift the team from doldrums. From the bottom of the ‘Third Division’, he brought up the team to 8th position, winning 35 matches and losing 27, out of a total of 85.
He then joined Huddersfield Town, first as reserve team coach, and later as manager, from 1955 to 1959, promoting many promising youngsters with good game. However, his statistics did not do much to improve the club’s position which was at 12th, went up to 9th and finished at 14th position under him.
The years from 1949 to 1964 were his most remarkable ones as he worked on transforming a derelict Liverpool team to bring it up to the third position in the league. He had to start from scratch, improving the practice grounds and then providing the right training to the players.
It was Shankly’s greatest ambition to win the FA Cup, which Liverpool did for the first time in 1965, and once again eight years later. Apart from this, he had under his belt, the UEFA Cup and FA Charity Shield, which his team won several times.
Even after retirement in 1974, Shankly continued to be involved with football, appearing on radio chat shows connected to the game, helping other players and taking up advisory roles. He strove to keep himself fit and engaged in friendly kick-bouts with local youngsters. 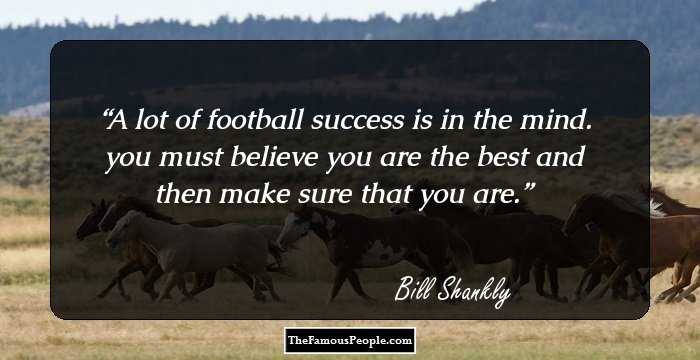 Quotes: You, Believe
Awards & Achievements
Bill Shankly received the ‘Order of the British Empire’ in 1974, four months after his retirement from Liverpool. This award was for his outstanding contribution to the game of football, both as player and manager.
He was conferred with the ‘Manager of the Year’ award in the season 1972-73. The ‘League Managers Association’ award is decided by voting by other league managers.
Winning the FA Cup in 1938 is regarded as the highlight of Shankly’s career as a football player. The only goal scored by Preston North End in that match was due of Shankly’s tireless efforts to break the deadlock in the game.
Shankly has the honour of being the Inaugural Inductee to the ‘English Football Hall of Fame’ and the ‘Scottish Football Hall of Fame’. The Halls celebrate the achievements of football players and managers for their significant contributions to the game of football.
Personal Life & Legacy
Shankly got married to Agnes ‘Nessie’ Fischer on 29th June, 1944. He met her when he was serving in the RAF while she was recruited by the WAAF and both were stationed at the same camp.
The 15 foot, cast-iron ‘Shankly Gates’ was a tribute to him from Liverpool. It was constructed in his honour and put up at the entrance at the Anfield road side at the stadium, and was inaugurated by his wife Nessie.
A bronze statue of Shankly, created by Tom Murphy, was unveiled at the new Visitor’s Centre, in front of the Kop, at Anfield. Standing over eight feet tall, the statue shows Shankly in a striking pose, taking the applause from adoring fans. 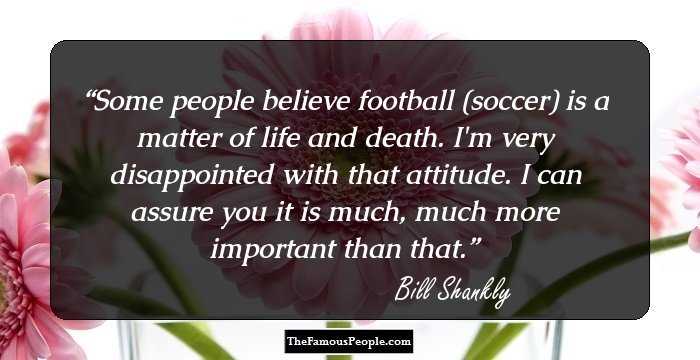 Quotes: You, Life, Death, Believe, I
Trivia
This charismatic personality’s autobiography book was one that Liverpool was keen to ban. The book was published just around the time of his resignation from Liverpool and contained information which they wanted to suppress.

See the events in life of Bill Shankly in Chronological Order