Advanced Search
Tim Burton is an American writer, producer, director, artist, and animator. Blessed with excellent drawing skills and imaginativeness, Burton converted his hobby into a career and went on to become successful. A graduate of ‘California Institute of Arts,’ he started his career by taking up the position of an apprentice animator at ‘Walt Disney Studios.’ This was just the beginning of his illustrious career as he set forth to make a mark as a director, producer, writer, poet, and stop motion artist in the American film industry. In a career spanning almost 50 years as of 2020, he has directed dark, gothic, macabre, and quirky horror and fantasy films. The effective use of musical interludes, which is prominently seen in almost all his films, adds to the dark gothic setup. Most of his films focus on a misunderstood outcast and include characters who distrust the protagonist. Some of his successful films include ‘Pee-wee's Big Adventure,’ ‘Batman,’ ‘Batman Returns,’ ‘Planet of the Apes,’ ‘Charlie and the Chocolate Factory,’ ‘Alice in Wonderland,’ and ‘Edward Scissorhands.’ American People
Screenwriters
T V & Movie Producers
American Men
California Institute Of The Arts
Childhood & Early Life
Tim Burton was born Timothy Walter Burton on August 25, 1958, in Burbank, California, USA, to Jean Burton and Bill Burton. His mother was the owner of a cat-themed gift shop, while his father, a former minor league baseball player, worked for the ‘Burbank Park and Recreation Department.’
He received his preliminary education from ‘Burbank High School.’ An average student, he did not have much interest in the regular curriculum and instead had an affinity towards painting, drawing, and watching films.
Tim took to filmmaking since his pre-teen years. He often indulged in making short films using the stop motion animation techniques. One of his films titled ‘The Island of Doctor Agor’ was made when he was 13 years old.
Completing his education from ‘Burbank High School,’ he enrolled at ‘California Institute of Arts’ to take up a course in character animation. It was while studying here that he made films like ‘Stalk of the Celery Monster’ and ‘King and Octopus.’ He graduated from the institute in 1979. 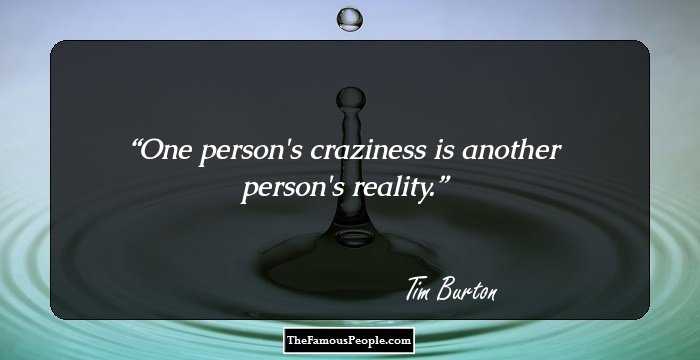 Continue Reading Below
Career
He started his career by working as an apprentice animator at ‘Walt Disney Studios.’ However, his stay at the studio was short-lived due to the creative differences that he had with some of the executives there.
During his time at ‘Disney,’ he embarked on his solo career and made a short film titled ‘Vincent’ which was showcased at the ‘Chicago Film Festival.’ The film met with positive response and fetched him an award too.
He followed this up with his first live-action production ‘Hansel and Gretel.’ In 1984, he released his next live-action short film ‘Frankenweenie.’ The year also marked his last term of service with ‘Disney.’
The success of his first two short films led him to direct the cinematic sequel of his popular character ‘Pee-wee Herman.’ The film was titled ‘Pee-wee's Big Adventure.’ The film witnessed the very first collaboration of Tim and songwriter Danny Elfman which would continue for years.
‘Pee-wee's Big Adventure’ was highly successful and provided him an opportunity to direct more such films throughout the decade. These films included ‘Bettlejuice’ and ‘Batman.’ Both the films were highly successful and established his reputation as a top-notch director. ‘Batman’ became one of the biggest box office hits at the time of its release.
He started the 1990s with the romance fantasy film ‘Edward Scissorhands.’ The movie, which went on to become successful, is rated by critics as one of his best movies till date.
Thanks to the success of ‘Batman,’ he came up with its sequel ‘Batman Returns’ in 1992. The movie was a darker adaptation of its prequel and was centered on the villains than the superhero. It garnered positive response from both audience and the critics.
In 1993, he penned and produced the film ‘The Nightmare Before Christmas,’ an animated musical. The film, which was appreciated by the critics and audience alike, went on to gain commercial and critical success.
In 1994, he came up with two more films, ‘Cabin Boy’ and ‘Ed Wood.’ Both the films were panned by the audience and were commercial failures. The only saving grace was the critics’ appreciation for ‘Ed Wood.’
Continue Reading Below
In 1994, he started producing the next film in the ‘Batman’ franchise, ‘Batman Forever.’ Directed by Joel Schumacher, the film was a blockbuster hit, earning more than $336 million at the box office.
After the success of his latest film from the ‘Batman’ franchise, he joined hands with Denise Di Novi to produce ‘James and the Giant Peach.’ Directed by Henry Selick, the film was well-received by the critics.
He ended the 1990s with three more films; ‘Mars Attacks!,’ ‘Superman Lives,’ and ‘Sleepy Hollow.’ While ‘Mars Attacks!’ bombed at the box office, ‘Sleepy Hollow,’ which was an adaptation of Washington Irving’s ‘The Legend of Sleepy Hollow,’ went on to receive average reviews from the public.
In the new millennium, he came up with his next project, ‘Planet of the Apes.’ The film was a commercial success, despite receiving mixed response from the audience and critics alike.
He followed this up with the film ‘Big Fish,’ which was based on the novel of the same name. The film was a major success commercially and critically. It went on to receive four ‘Golden Globe’ nominations as well as an ‘Academy Award’ nomination.
In 2005, he came up with ‘Charlie and the Chocolate Factory’ and ‘Corpse Bride.’ The former earned $475 million at the box office and was nominated for an ‘Academy Award’ under the ‘Best Costume Design’ category. ‘Corpse Bride’ was his first full-length stop motion film as director.
In 2007, he directed ‘Sweeney Todd: The Demon Barber of Fleet Street.’ In 2009, he produced an adult computer-animated science fiction film titled ‘9.’ Both the films were widely appreciated and went on to receive several nominations and awards at prestigious award ceremonies, such as ‘Academy Awards,’ ‘Golden Globe Awards,’ etc.
In 2010, he came up with the film ‘Alice in Wonderland’ which went on to receive ‘Academy Awards’ for ‘Best Art Direction’ and ‘Best Costume Design.’ He followed this up with ‘Dark Shadows’ which received mixed reviews from the critics.
He served as the co-producer of the film ‘Abraham Lincoln: Vampire Hunter’ which released in 2012. The film was based on Seth Grahame-Smith’s novel of the same name. It opened to mixed response from the public. The same year, he directed the film ‘Frankenweenie’ which was an adaptation of his 1984 short film.
Continue Reading Below
In 2014, he co-produced and directed a biographical drama film titled 'Big Eyes.' In 2015, the film was nominated at the 'British Academy Film Awards' under the 'Best Production Design' category.
In 2016, he directed a fantasy film titled ‘Miss Peregrine's Home for Peculiar Children.’ The film was a commercial success, earning $296.5 million at the box office. The same year, he also produced ‘Alice Through the Looking Glass,’ a sequel to his 2010 film ‘Alice in Wonderland.’
In 2019, he directed the fantasy adventure film ‘Dumbo’ which premiered on March 11, 2019, in Los Angeles. The film was a huge box office success, earning $353.3 million against a budget of $170 million. 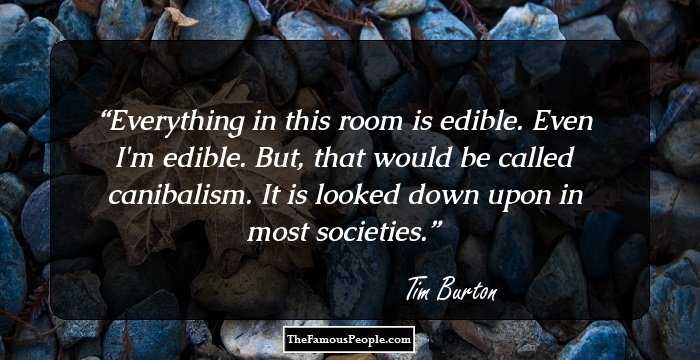 Awards & Achievements
In 2007, he was honored with the ‘Golden Lion for Lifetime Achievement Award’ at the 64th ‘Venice International Film Festival.’
In 2008, he was honored with the ‘Scream Immortal Award’ for his unique interpretation of horror and fantasy.
He served as the president of the jury at the 63rd annual ‘Cannes Film Festival,’ which was held from May 12 to 24, 2010, in Cannes, France.
In 2010, he received the insignia of Chevalier of Arts and Letters from the then-Minister of Culture Frédéric Mitterrand.
In his long career, he has won many prestigious awards, including the ‘Emmy Award,’ ‘Golden Globe Awards,’ ‘National Board of Review Awards,’ and ‘Producers Guild of America Awards.’
Personal Life & Legacy
He tied the nuptial knot with Lena Gieseke, a German artist. However, the marriage did not work out and he left her to be with Lisa Marie Smith.
He broke up with Lisa in 2001 and started a relationship with actress Helena Bonham Carter. The two were blessed with a son and daughter. Tim and Helena separated in 2014. 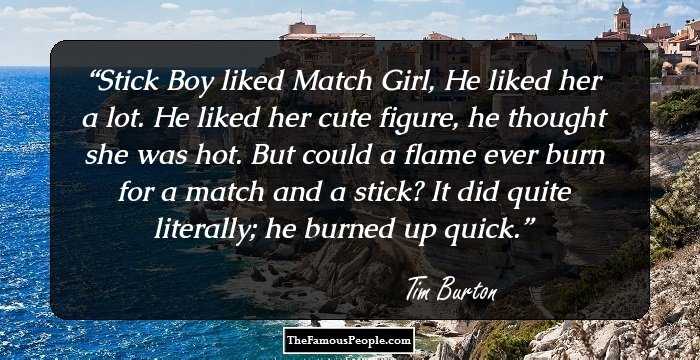 Trivia
This American film director who directed ‘Planet of the Apes’ has a phobia of chimpanzees.

See the events in life of Tim Burton in Chronological Order