Brad Pitt is a renowned American actor who started out with insignificant roles in Hollywood movies. Displaying an interest in acting since a very young age, the actor dropped out of college to pursue a career in the showbiz world. After minor acting stints in movies like '21 Jump Street', 'Cutting Class', and 'Happy Together', he got his big break in 'Legends of the Fall'. Playing the lead role within a talented ensemble cast, including the famous Anthony Hopkins, his performance was well-received. He then acted in the Morgan Freeman-starrer 'Seven', gradually making a name for himself in the film industry. His acting career has been a mix of ups and downs, but over the years, he has proved his mettle to the world, and now is a sought-after actor. His major hits have been movies like 'Fight Club', 'Ocean's Eleven', its sequels, 'Troy', 'Mr. & Mrs. Smith', 'The Departed', 'Babel', and 'World War Z'. This famous actor also has his own production house, 'Plan B Entertainment', which has produced some impressive movies. Other than acting, he has lent his voice to several animated characters, including 'Sindbad' and 'Metro Man'. This actor has impressed the world, not just with his acting calibre, but also the social causes that he advocates and regularly contributes to Knox Leon Jolie...
DID WE MISS SOMEONE?
CLICK HERE AND TELL US
WE'LL MAKE SURE
THEY'RE HERE A.S.A.P
Quick Facts

American People
T V & Movie Producers
American Men
Oklahoma Actors
University Of Missouri
Childhood & Early Life
William Bradley Pitt was born to a truck company owner, William Alvin, and his wife, Jane Etta, a counsellor in a school, on December 18, 1963, in Shawnee, Oklahoma. He later settled down in Springfield, Missouri with his family consisting of two other siblings, Doug and Julie Neal.
The young boy pursued his secondary education from the 'Kickapoo High School'. In school, he showed interest in co-curricular activities like swimming, acting, golf, tennis, and debates. In 1982, he joined the ‘University of Missouri’, to study journalism, with a specialisation in advertising, but quit two weeks before graduating. 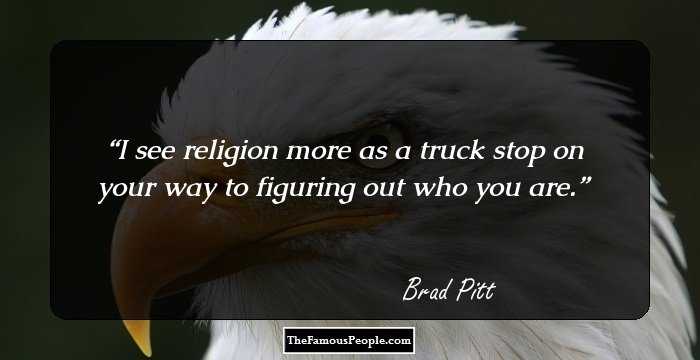 Quotes: You
Continue Reading Below
Career
Pitt made his acting debut in 1987, with minor roles in movies like ‘Less Than Zero’, ‘No Way Out’, and ‘No Man's Land’. He also appeared for two episodes in the sitcom 'Another World', broadcast by 'NBC' television network.
In 1988, he had a cameo role in the movie, '21 Jump Street', after which he was signed on as the main actor for the movie 'The Dark Side of the Sun'. However, the movie, a collaboration of U.S. and Yugoslavian producers, could not be completed in the stipulated time, owing to the 'Croatian War of Independence'
For the next few years, he enacted in small-time roles in movies like 'Cutting Class', 'Happy Together', as well TV series 'Freddy's Nightmares', and 'Growing Pains'. However, it was his performance as criminal 'J.D.' in 'Thelma & Louise', which gave an indication to the world of his potential as an actor.
He gave a few more unimpressive performances in films that were box-office failures. He then bagged a role in Robert Redford's 'A River Runs Through It', where the former played the role of Paul Maclean. The movie as well as his performance was appreciated by critics and audiences alike.
In 1994, he was a part of an ensemble cast comprising Antonio Banderas, Tom Cruise, Christian Slater, and Kirsten Dunst, in the movie 'Interview with the Vampire'.
The same year, he acted as Tristan Ludlow, in an adaptation of Jim Harrison's novel, named 'Legends of the Fall', along with Anthony Hopkins, Juliette Binoche, Aidan Quinn, and Henry Thomas.
The following year, the talented actor was cast alongside actors Gwyneth Paltrow and Morgan Freeman, in 'Seven', as a detective trying to catch a serial killer. The movie was a hit at the box-office, earning $327 million. Next he starred in the 1995 sci-fi movie, '12 Monkeys', directed by Terry Gilliam.
The next few years, he appeared in fairly successful movies like 'Sleepers', ‘Meet Joe Black’, and 'The Devil's Own'. He also played the role of Austrian climber Heinrich Harrer in a movie titled 'Seven Years in Tibet', but the film failed to impress audiences.
In 1999, Brad was cast opposite famous actors Edward Norton and Helena Bonham Carter, in the movie 'Fight Club'. Though the film opened to mixed reception, Norton's alter-ego, played by Pitt, was the topic of praise.
Continue Reading Below
Two years later, in 2001, 'The Mexican', a romantic comedy with star Julia Roberts, was a box-office success, leading to Pitt's next role in 'Spy Game'. The thriller, directed by Tony Scott, and co-starring Robert Redford, grossed $143 million.
In December, 2001, the rising star played a major part in 'Ocean's Eleven', with a large cast including Matt Damon, Julia Roberts, and George Clooney. The film proved to a major hit at the box-office with earnings of $450 million across the globe.
In 2003, he began lending his voice to animated movies, like 'Sindbad: Legend of the Seven Seas', and 'King of the Hill'.
The following year, in 2004, the gifted actor played the part of Achilles in the 'Iliad'-inspired film, 'Troy'. For the role, he trained extensively in sword-fighting, and his brief but power-packed performance was highly commendable. The same year, he appeared in 'Ocean's Twelve', which grossed 362 million dollars.
In 2005, action-comedy movie 'Mr. & Mrs. Smith', starring Pitt and Angelina Jolie, was released, and became one of the most successful films of the year, earning $478 million. The next year, he starred in 'Babel', alongside Cate Blanchett—the movie and its actor received numerous 'Academy' and 'Golden Globe' nominations.
In 2006, Pitt's production house, 'Plan B Entertainment' released 'The Departed'. The movie was directed by Martin Scorcese and starred great actors like Matt Damon, Leonardo DiCaprio, Jack Nicholson and Mark Wahlberg, and was awarded the 'Oscar' for 'Best Picture'.
A drama, titled 'The Assassination of Jesse James by the Coward Robert Ford', featuring Brad was released in 2007. The movie, produced by the actor's company, 'Plan B Entertainment', was critically acclaimed.
The remarkable actor was cast in the lead role of 'The Curious Case of Benjamin Button', a film directed by David Fincher. In the movie, released in 2008, Pitt plays the role of a man in his eighties who looks younger as he grows older.
In 2009, he appears in Quentin Tarantino’s ‘Inglorious Basterds’, as Lieutenant Aldo Raine. The movie boasts of exceptional performances by all its actors, and was highly appreciated by critics and viewers alike, earning $311 million.
Continue Reading Below
The following year, he lent his voice once more to animated superhero ‘Metro Man’, in the film ‘Megamind’. In 2011, he gave a commendable performance as Billy Beane, in ‘Moneyball’, directed by Bennett Miller.
In 2013, Brad starred in box-office hits like zombie film ‘World War Z’ and ‘Academy Award’ winning movie ‘12 Years a Slave’. Recently he has acted in the war movie, ‘Fury’. 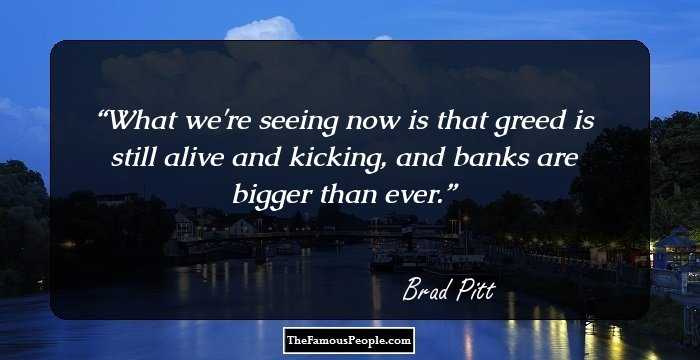 Major Works
This impressive actor is known for his strong performances in most of his movies, but it is ‘World War Z’ that packs a punch with splendid acting, thrilling moments, and a sound storyline. The film, released in 2013, was such a big hit that it grossed 539 million dollars at the box-office, surpassing his other movies like ‘Ocean’s Eleven’ and ‘Mr. & Mrs. Smith’.
Awards & Achievements
In 1995, his supporting role in the science fiction movie '12 Monkeys', won him the 'Golden Globe Award', as well as a nomination for the 'Academy Award'.
Brad won a nomination for the ‘Emmy Award’ for ‘Outstanding Guest Actor in a Comedy Series’, for his cameo in eighth season of the popular sitcom 'Friends'.
In 2007, the popular actor won 'Volpi Cup' award for 'Best Actor' for his performance in his own company's production, 'The Assassination of Jesse James by the Coward Robert Ford'. The award was presented at the '64th Venice International Film Festival'.
He won several 'Academy' and 'Golden Globe' nominations for his portrayal of the protagonist in the 2008 film, 'The Curious Case of Benjamin Button'.
Pitt's character Aldo Raine, from 'Inglorious Basterds', earned a nomination at the 'MTV Movie Award' for 'Best Male Performance'.
Continue Reading Below 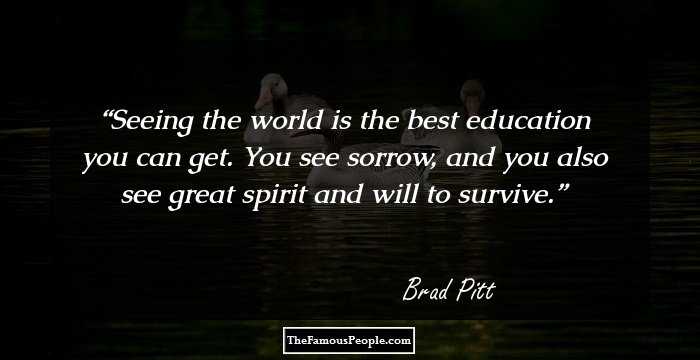 Personal Life & Legacy
For brief periods of time early in his film career, Pitt dated co-actresses, Robin Givens, Juliette Lewis, and Jill Schoelen. From 1994-97, he was in a relationship with American actress Gwyneth Paltrow.
In 2000, he married actress Jennifer Aniston, of 'Friends' fame. However, after five years of marriage, the two actors decided to separate.
Subsequently after the announcement of his divorce, Brad started dating actress Angelina Jolie in 2004. However, the two, popularly known as "Brangelina", got married on August 23, 2014. After staying together for 12 years, in September Angelina Jolie filed for divorce with Brad Pitt and announced their separation.
Together the couple have a daughter, Shiloh Nouvel, as well as twins, Knox Léon and Vivienne Marcheline. They also have three adopted children, Maddox Chivan, Pax Thien, and Zahara Marley. The three were born in Cambodia, Vietnam, and Ethiopia, respectively.
This gifted actor is also known for his humanitarian activities, especially for causes like stem-cell research, poverty, and AIDS. He is also one of the founder members of an organisation called ‘Not On Our Watch’, along with other actors such as George Clooney, Don Cheadle and Matt Damon.
He has founded another NGO called the ‘Make It Right Foundation’, which provided residential rehabilitation for the victims of ‘Hurricane Katrina’. He has also founded, along with Angelina, the ‘Jolie-Pitt Foundation’, that has made significant monetary contributions to several charitable organizations.
Trivia
This famous American actor is a perfectionist, and before the shooting of his movie ‘Fight Club’, he visited a dentist to get his front teeth broken, to get into the skin of the character. Once the shooting of the film was completed, he had to get his teeth fixed.

See the events in life of Brad Pitt in Chronological Order