Thomas Aquinas was an Italian Dominican theologian hailed as the father of the Thomistic school of theology. A Catholic priest, he was also a prominent philosopher, and jurist in the tradition of scholasticism. Originally named Tommaso d'Aquino, he is hailed as the most influential Western medieval legal scholar and theologist, and was instrumental in the development of several concepts in modern philosophy. He himself was greatly inspired by the ancient Greek philosopher Aristotle and attempted to integrate Aristotelian philosophy with the principles of Christianity. He was considered an authority of the Roman Catholic Church for his ability to effortlessly combine the theological principles of faith with the philosophical principles of reason. He was born as the youngest child in a large family of lower nobility in Italy. It is said that when his mother was pregnant with him, a holy hermit told her that her son would one day become a great learner and achieve unequaled sanctity. He decided to embark on a religious career as a young man despite vehement opposition from his family. He went on to earn his doctorate in theology and became a much respected scholar. He devoted much of his life to traveling, writing, teaching, public speaking and preaching. A prolific writer, he penned several commentaries on the Bible and discussions of Aristotle's writings on natural philosophy Pope Innocent III
DID WE MISS SOMEONE?
CLICK HERE AND TELL US
WE'LL MAKE SURE
THEY'RE HERE A.S.A.P
Quick Facts

Italian People
Priests
Philosophers
Spiritual & Religious Leaders
Italian Men
Childhood & Early Life
Thomas Aquinas is believed to have been born on 28 January 1225 in Aquino, Kingdom of Sicily, Italy. His father was Landulf, count of Aquino and his mother was Theodora, countess of Teano. He was the youngest of eight children in the family. His family members were descendants of Emperors Frederick I and Henry VI and were considered to be of lower nobility.
After completing his early education, he was enrolled at the studium generale (university) recently established by Frederick in Naples in 1239. Here he was introduced to the works of Aristotle, Averroes and Maimonides, and was greatly influenced by their thoughts.
During this time he also became acquainted with John of St. Julian, a Dominican preacher in Naples who would play a key role in the young man’s choice of a career. At the age of 19, Thomas decided to join the recently founded Dominican Order, much to the chagrin of his parents.
His family made several attempts to dissuade him from taking the step; they even held him as a prisoner for about a year in the family castles at Monte San Giovanni and Roccasecca. His brothers tried to distract Thomas by hiring a prostitute to seduce him. But the young Thomas was determined to dedicate his life to religion and remained steadfast in his resolve.
His mother realized that Thomas would not change his mind and helped him escape from his imprisonment so that he could follow his heart. He first went to Naples and then to Rome to meet Johannes von Wildeshausen, the Master General of the Dominican Order.
In 1245, he started studying at the Faculty of the Arts at the University of Paris, where he most likely met Dominican scholar Albertus Magnus. Soft-spoken and humble, Thomas was often mistaken to be dumb by his fellow students. However, Albertus recognized his potential and predicted that he would one day become a great scholar. 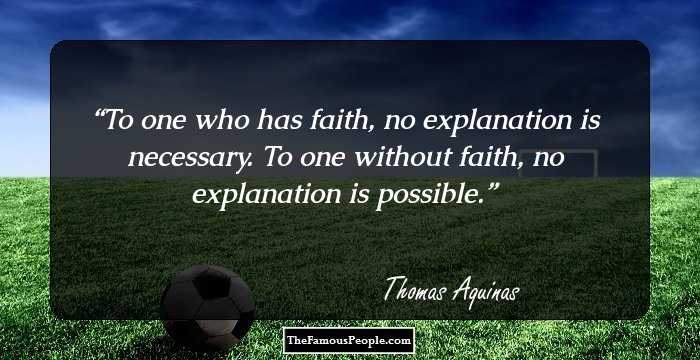 Continue Reading Below
Later Life
Thomas Aquinas was ordained in Cologne, Germany, in 1250. He went on to teach theology at the University of Paris and also furthered his education under the tutelage of St. Albert the Great and subsequently earned his doctorate in theology.
He was appointed regent master in theology at Paris in 1256, a post he would hold till 1259. During his tenure, he wrote numerous works including ‘Questiones disputatae de veritate’ (Disputed Questions on Truth), ‘Quaestiones quodlibetales’ (Quodlibetal Questions), and ‘Expositio super librum Boethii De trinitate’ (Commentary on Boethius's De trinitate).
By the time his tenure ended, he had become quite famous and had gained a reputation for being an exemplary scholar. He spent many of the ensuing years preaching, teaching and writing, while also holding important positions, including that of a general preacher in Naples. He produced several works for Pope Urban IV such as the liturgy for the newly created feast of Corpus Christi and the ‘Contra errores graecorum’ (Against the Errors of the Greeks).
In 1265, he started teaching at the studium conventuale at the Roman convent of Santa Sabina where he taught the full range of philosophical subjects, both moral and natural. During this time he also began working on ‘Summa Theologiae’, his most important work.
He also wrote other important works such as like his unfinished ‘Compendium Theologiae and Responsio ad fr. Ioannem Vercellensem de articulis 108 sumptis ex opere Petri de Tarentasia’ (Reply to Brother John of Vercelli Regarding 108 Articles Drawn from the Work of Peter of Tarentaise).
He went back to Paris as a regent master at the University of Paris for a second time in 1268. He wrote two major works during this stint which lasted till 1272. One of them was ‘De unitate intellectus, contra Averroistas’ (On the Unity of Intellect, against the Averroists) in which he criticized the concept of "Averroism" or "radical Aristotelianism".
In 1272, he was asked to establish a studium generale wherever he liked by the Dominicans from his home province. Thus he took leave from the University of Paris to start work on the project. He established the institution in Naples and became its regent master. He had a profound religious experience in December 1273 following which he stopped writing. 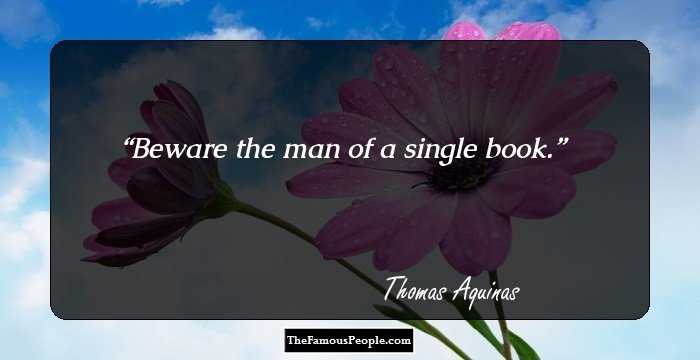 Major Works
Thomas Aquinas is best known as the author of the ‘Summa Theologiae’. Even though he could not finish the work, it is regarded as "one of the classics of the history of philosophy and one of the most influential works of Western literature”. The Summa covers topics such as the existence of God, creation of Man, Man’s purpose, Christ, etc. He also wrote several important commentaries on Aristotle's works, including ‘On the Soul’, ‘Nicomachean Ethics’ and ‘Metaphysics’.
Death & Legacy
Thomas Aquinas embarked on a trip to Lyon, France, on foot to serve on the Second Council, in January 1274. However, he fell ill along the way at the Cistercian monastery of Fossanova, Italy, and died on 7 March 1274.
He was canonized on 18 July 1323, by Pope John XXII, 50 years after his death. He is honored with a feast day in some churches of the Anglican Communion. 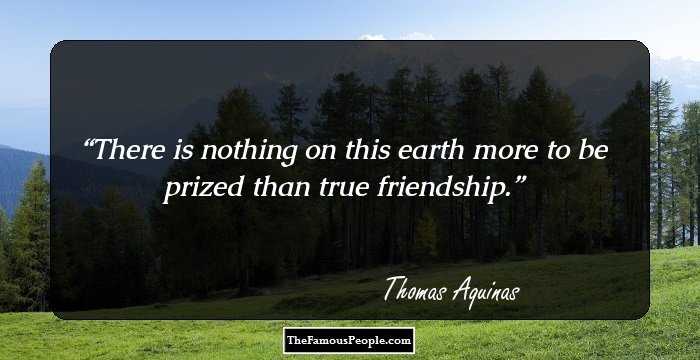 Quotes By Thomas Aquinas | Quote Of The Day | Top 100 Quotes

See the events in life of Thomas Aquinas in Chronological Order