(Lead Guitarist and Keyboardist of the Rock Band 'U2')
Advanced Search

David Howell Evans, better known as the Edge, is an Irish musician and songwriter. He is the lead guitarist, keyboardist and backing vocalist of the rock band, U2. A guitarist of astonishing versatility, he is known for his low-key playing style, stripped-down guitar riffs with delay effects and reverb. His minimalistic and textural style has become U2's trademark. He was rechristened, 'The Edge,' by fellow U2 member Bono Vox. The nickname might have been inspired from Evans’s sharp features, sharp mind or his ability to observe things from the edge without being involved completely. The Edge is a Protestant Christian. At one point in his career, he wanted to leave the band due to his religious beliefs but later chose not to do so. He has recorded around 14 albums with the band. He was an intelligent student in school and wished to become a doctor or engineer. But after the inception of U2, his commitment to the band and interest in music grew stronger, and he quit his academic ambitions after finishing high school. Irish People
Rock Musicians
Lyricists & Songwriters
Irish Men
Leo Singers
Childhood & Early Life
The Edge was born as David Howell Evans on August 8, 1961 at the Barking Maternity Hospital in Essex, East London. Both his parents, Garvin and Gwenda Evans, were of Welsh descent. Garvin worked as an engineer for Plessey, an electronic company.
He has an older brother, Richard (Dik), and a younger sister named, Gillian (Gill). Davis and Richard received piano and guitar lessons together. Richard was even his band member in the beginning.
In 1962, the family moved from Chadwell Heath, Essex, to Dublin, Ireland, as Garvin was promoted and transferred there. David has lived there ever since.
He received formal education first at St. Andrew's National School, in Malahide, and then at Mount Temple. He used to converse in two different accents – Welsh at home and Irish English when outside.
Continue Reading Below
You May Like

The Hottest Male Celebrities With The Best Abs
Initial Growth with U2
In the fall of 1976 while studying at the Mount Temple, the Edge’s brother Dik responded to Larry Mullen's note on the school's noticeboard to form a new band with him. The trio was joined by two other respondents, Paul Hewson and Adam Clayton. They named their band 'Feedback'.
The band gave its first performance at St. Fintan's High School in April 1977, after which it went through a few overhauls. Band’s name was first changed to 'Hype' and then to 'U2' in March 1978.
U2 played without band member Dik and won a talent contest sponsored by Harp Lager and the Evening Press in Limerick. After that, Dik ceremonially phased out as a 'Hype' member at a concert at the Presbyterian Church Hall in Howth. The remaining four members played officially as 'U2'.
In these performances, the Edge displayed guitar skills well beyond his age. He was the lead guitarist and backing vocalist of the group, while Paul (Bono) was the lead vocalist and rhythm guitarist. Adam was the bass guitarist of the band and Larry was responsible for drums and percussion.
From 1977 to 1978, U2 gave many small-scale public performances mainly in Dublin and occasionally elsewhere in Ireland. Their first concert outside Ireland took place in December 1979 in London after which, they performed various shows across the British Isles for a year.
In 1980, their debut album 'Boy' was released. Next year, they released their album, 'October', which explored spiritual themes.
Over the next seven years, their album 'War' and its opening track 'Sunday Bloody Sunday' gained immense popularity. Another single 'Pride' from the album 'The Unforgettable Fire' established their reputation as a socially and politically conscious group.
On July 13, 1985, their live performances at Live Aid, a music-based fundraising initiative for the Ethiopian famine, made them globally renowned.
International success came to the Edge through the band's fifth album 'The Joshua Tree' in 1987. Their singles 'With or Without You" and 'I Still Haven't Found What I'm Looking For' topped the music charts.
Continue Reading Below
As Backing Vocalist
From 1983 to 1987, the Edge provided backing vocals to U2’s live album, 'Under a Blood Red Sky,' and the video, 'Live at Red Rocks: Under a Blood Red Sky'. He sung in chorus with Bono to 'Sunday Bloody Sunday' and 'Bullet the Blue Sky'.
Experimenting with new techniques, he invented an approach of using backing vocals in form of repeated cries like in the songs: 'Beautiful Day', 'Stay (Faraway, So Close!)', 'New Year's Day' etc.
Falsetto, another technique, was used by him in the following tracks: 'Sometimes You Can't Make It on Your Own', 'Stuck in a Moment You Can't Get Out Of', 'The Wanderer', 'A Man and a Woman' and 'Window in the Skies and The Fly'.
Besides backing vocals, he has also tried lead singing (solo or duet) and vocal bridge in 'Van Diemen's Land', 'Numb', 'Second's', 'Discotheque', 'Miracle Drug', 'Stand by Me', 'Love is Blindness' etc.
Musical Work outside U2
The Edge has recorded music outside his band, and some of those works include the theme song for the movie, 'The Batman' (first two seasons) and the score for the film, 'Captive'.
With Bono, he composed the theme of 'GoldenEye', a James Bond film, and the musical adaptation of 'Spider-Man'. They also recorded the single 'Rise Above 1' with Reeve Carney which was released digitally on May 25, 2011. Two months later, its music video was also released.
In 2008, he became an important part of the documentary 'It Might Get Loud' directed by Davis Guggenheim. It was premiered at the Toronto International Film Festival.
On 29 April 2016, he performed for the Angiogensis Foundation in the Sistine Chapel.
Major Works
The Edge was one of the co-founders of a charity named 'Music Rising' in 2005. It helped professional musicians, community churches and schools in getting replacements for the instruments that they lost in hurricane Katrina.
Continue Reading Below
He serves on the board of the NGO, the Angiogenesis Foundation, dedicated to improving global health.
Awards & Achievements
The Edge featured at number 38 by Rolling Stone in the category, 100 Greatest Guitarists of All Time, in 2011. Four years later, he alongside Bono got the 35th position on their list of 100 Greatest Songwriters of All Time.
In 2012, he was ranked 13th on Spin's list.
The 2008 documentary, 'It Might Get Loud', explores the history of electric guitar and focusses on the styles of Jack White, Jimmy Page and the Edge.
Family & Personal Life
The Edge has three daughters; Hollie, Arran and Blue Angel, from his marriage to Aislinn O'Sullivan, his secondary school girlfriend. The couple separated after seven years of marriage in 1990 but were legally divorced in 1996.
On June 18, 2002, he married American choreographer Morleigh Steinberg. He first met her at the band's Zoo TV Tour, and they dated for nine years. They have two children; daughter Sian and son Levi.
Troubled relationship with his first wife and the pain of separation deeply influenced his music. The album 'Achtung Baby' has the theme of personal pain and loneliness, and its closing track 'Love Is Blindness' describes a failing romance.
Trivia
The Edge plays a wide range of instruments: electric guitar, acoustic guitar, bass guitar, piano, keyboard and lap steel guitar.
He played his vintage 70's Stratocasters until he unveiled a signature guitar model named, 'The Edge Signature Stratocaster'
He uses a vintage Vox AC30 for main amplification.
The Edge was nine when his mother bought him his first guitar. It was an old acoustic guitar from a local flea market.

See the events in life of The Edge in Chronological Order 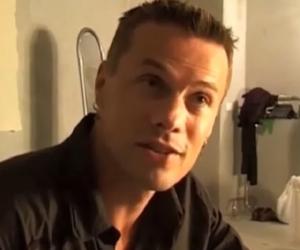