Steven Curtis Chapman is an American Christian musician, singer, song writer, record producer, actor, author and social activist. He is the only artist in the history of music to have won 56 Gospel Music Association Dove Awards and is also a proud receiver of 5 Grammy Awards. His music is known for being a unique cross between country music, soft rock and orchestrated pop, which made him a prominent artist in the contemporary Christian music circuit of the 1980s. Chapman grew up in a humble environment where he found his calling for music, owing to his father’s inclination towards country music. He learnt to play instruments like guitar and piano just by hanging around in his father’s music store, listening to him play along with his friends. He took up music seriously when he moved to Nashville and got recognized by Sparrow Records, a company he stayed with for a long period in his career. He has released 19 studio albums and has sold over 10 million albums until now. Chapman is a family oriented person just like his father and has a big family comprising of his wife Mary Beth and 3 biological and 2 adopted children. He is a vocal advocate for adoption and has worked socially to eradicate the problem of youth violence. American People
Gospel Singers
Lyricists & Songwriters
American Men
Kentucky Musicians
Childhood & Early Life
Steven Curtis Chapman was born on November 21, 1962 in Paducah, Kentucky, to Herb and Judy Chapman. His father was a country singer and songwriter, who turned down opportunities to become a successful singer to concentrate on his family. His mother was a stay-at-home mom.
His father owned a music store, a business he managed from his basement and used to play music with his friends. Such creative environment at home influenced Chapman’s life from very early on and he bought his first guitar at 6.
Chapman joined as a pre-med student at Georgetown College in Kentucky but after few semesters he moved to Anderson College, Indiana. But he ultimately dropped the idea of studying and went to Nashville to pursue his first love, music.
During 1980s, he wrote a song ‘Built to Last’, which gained huge popularity after getting recorded by a gospel group ‘The Imperials’. The success of the song fetched Chapman a songwriting deal with Sparrow Records. 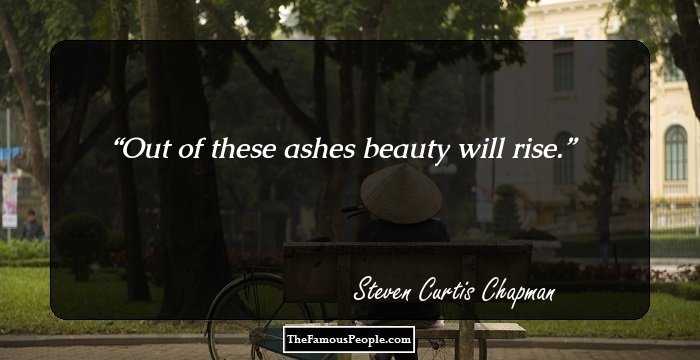 Famous Beautiful Women With Green Eyes
Career
Chapman’s first official album ‘First Hand’ was released in 1987. The album was an instant hit with singles like ‘Weak Days’ and topped at number 2 on the Contemporary Christian Music chart. The album had a mix of country music with soft rock and pop.
In 1988, following the success of his first album, Chapman released ‘Real Life Conversations’. Its hit single ‘His Eyes’ received the ‘Contemporary Recorded Song of the Year’ award from the ‘Gospel Music Association’. He co-wrote it with James Isaac Elliot.
After a few years, he made a swift turn to mainstream music with his album ‘The Great Adventure’ in 1992. It earned him two Grammy awards for the album and for the title song of the album.
After gaining consistent success with albums like ‘Heaven in the Real World (1994), ‘Signs of Life (1996) and ‘Speechless (1999), Chapman’s next great album ‘Declaration’ came out in 2001, for which he toured 70 cities.
In 2003, ‘All About Love’ was released and it ranked at Top 15 on the Christian Music charts. It was released under Sparrow Records and Chapman very humbly credited his wife Mary Beth for being the inspiration for his album.
‘All Things New’ was released in 2004 and the album added another Grammy to Chapman’s proud award collection. This time he received it in the category of Best Pop/Contemporary Gospel Album. It was also nominated for the Dove Award.
In 2005, ‘All I Really Want for Christmas’ was released, which was Chapman’s another successful Christmas album after ‘The Music of Christmas’. It had traditional holiday tunes and favorites like ‘Go Tell It on the Mountain’ and Silver Bells’.
Chapman took his music to greater levels by taking his concert to South Korea for the U.S. troops who were serving there in 2006. It was the first Christian concert that ever performed for the American army in that country.
In 2007, he released ‘This Moment’ which included hit singles like ‘Cinderella’, for which he was chosen for WOW Hits 2009. He also went on his ‘Winter Jam’ tour and took his sons’, Caleb and Will’s band along.
Continue Reading Below
‘Beauty Will Rise’, Chapman’s seventeenth album, was released in 2009. It is said that he wrote the songs of the album after getting inspired by his daughter Maria Sue’s sad and untimely demise. It included songs like ‘Meant to Be’ and ‘Re:creation’.
In 2012, Chapman finally parted ways with Sparrow Records, the record company that he remained loyal to for so many years. He was signed on by Sony’s Provident Label Group and came out with a Christmas album called ‘JOY’.
‘The Glorious Unfolding’ was released in 2013 under Reunion Records and it peaked on number 27 on the Billboard 200 and was number 1 Top Christian Album. The album was produced by Chapman himself and Brent Milligan. 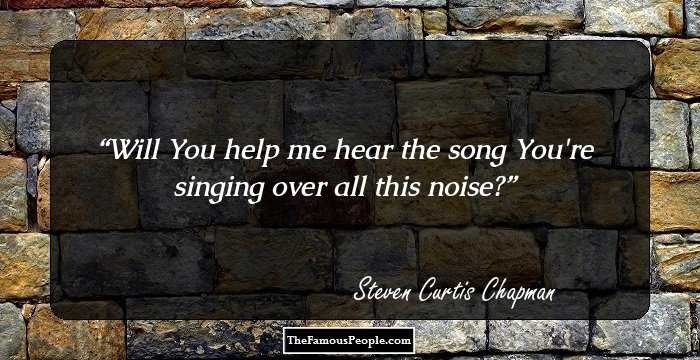 Quotes: You, Me, Will, Singing
Major Works
Chapman’s ‘The Great Adventure’ in 1992 was a turning point in his musical career because until now he was making soft and contemporary country music but with ‘The Great Adventure’ he targeted the mainstream audience and tasted huge commercial success for the first time.
Awards & Achievements
Chapman is the winner of five Grammy awards for albums like ‘For the Sake of the Call’ ‘The Great Adventure’ ‘The Live Adventure’, ‘Speechless’ and ‘All Things New’. He has also received 56 Gospel Music Association Dove Awards, more than any other artist.
Personal Life & Legacy
Chapman got married to Mary Beth in 1984 after they first met at Anderson University in Indiana. They have three biological children: Emily, Caleb and Will and three adopted children: Shaohannah, Stevey and Maria, together.
In 2008, Chapman’s youngest son Will ran over his car by accident on his adopted daughter Maria Sue Chunxi Chapman. She was running towards him to meet him but he did not see her and she was pronounced dead on arrival at the hospital.
Trivia
Chapman’s wife Mary Beth Chapman has written and released a book about losing her youngest daughter called ‘Choosing to SEE: A Journey of Struggle and Hope’.
Chapman and his wife have written three children's books with adoption themes: ‘Shaoey And Dot: Bug Meets Bundle’ (2004), ‘Shaoey and Dot: The Christmas Miracle’ (2005), and ‘Shaoey and Dot: A Thunder and Lightning Bug Story’ (2006).
He has received an Honorary Doctorate of Music from Anderson University.