Thaddeus Stevens was a 19th century Republican politician who was one of the most powerful members in the U.S. House of Representatives. He vehemently opposed slavery and discrimination against African-Americans, and fought hard to secure their rights during the Reconstruction era. Totally focused on civil rights, he helped draft the Fourteenth Amendment during Reconstruction. Born into poverty in rural Vermont, he had a very difficult childhood as his father abandoned the family when Thaddeus was very young. Moreover he was born with a club foot and developed a limp which restricted his physical movements. In spite of the challenges he faced he grew up to be a brilliant student and went on to become a lawyer. As someone who had suffered a lot as a youngster, he developed empathy for slaves and the other underprivileged classes in American society and sought equality for them throughout his legal career. Venturing into politics, he continued with his stance on social issues and became a strong advocate of free education and opposed the expansion of slavery. Following the Civil War he emerged as a radical Republican, openly advocating for equal rights for the blacks. The Fourteenth Amendment which he helped draft later served as a basis for civil rights legislation. Arnold Schwarze...
Political Leaders #323
Leaders #452
4th April In History
DID WE MISS SOMEONE?
CLICK HERE AND TELL US
WE'LL MAKE SURE
THEY'RE HERE A.S.A.P
Quick Facts

American People
Aries Leaders
Male Leaders
American Leaders
American Political Leaders
Childhood & Early Life
Thaddeus Stevens was born on April 4, 1792, in Danville, Vermont, U.S. as the second of four children of Joshua Stevens, a farmer and cobbler, and his wife Sarah. Thaddeus was born with a club foot.
His father abandoned the family when the children were quite young, leaving behind his wife to raise the children alone. Even though the family struggled in poverty, Sarah was determined to educate the children so that they could build better lives for themselves.
Thaddeus studied in the Caledonia Grammar School (often called the Peacham Academy) and enrolled at Burlington College of the University of Vermont following his graduation. Then he went to Dartmouth College in Hanover, New Hampshire from where he graduated in 1814.
After teaching in a school for a while he began to study law with Judge John Mattocks in Danville and was eventually admitted to the Maryland bar. 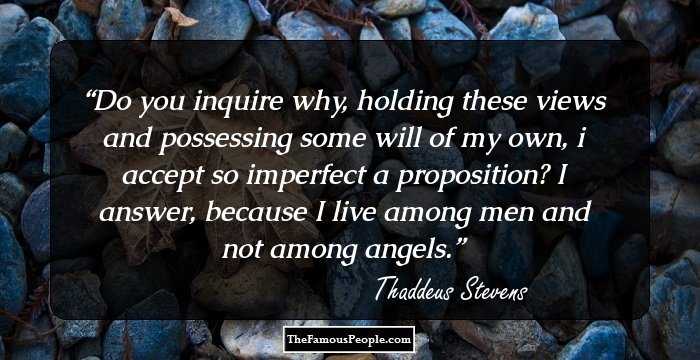 Quotes: You, Will, I
Continue Reading Below
You May Like

Who Is The Most Popular BTS Member?
Career
In 1816, he moved to Gettysburg to practice law. He was fiercely opposed to slavery and bondage, and defended several fugitives without fee. Eventually his practice became successful and he also ventured into politics.
He began his political career in 1833 by serving for four years in the state legislature as a member of the Anti-Masonic Party. As a politician he became noted for his oratory skills and strong beliefs in opposition of slavery.
In the 1830s, the abolitionist movement was in its nascent stage and there were only a few people such as William Lloyd Garrison who had taken up the cause. Supporting the anti-slavery movement was detrimental to Stevens’ political career but it did not stop him from fighting for the cause.
At the Pennsylvania constitutional convention in 1837, he fought against the disenfranchisement of African-Americans and refused to sign the 1837 constitution because of its discriminatory voting provision.
Stevens ran for election to Congress from Pennsylvania's 8th congressional district in 1848 and narrowly won. He then went on to serve as a Whig in the U.S. House of Representatives from 1849-53. In this position, he opposed the Compromise of 1850 as he felt that it would lead to future rebellion, disunion and civil war.
During the 1850s he gained much prominence as a major figure of Northern abolitionism. However his involvement in the anti-slavery movement negatively impacted his political career and he left the Whig in 1851.
He returned to his law practice which was thriving by now while continuing his involvement in politics. He joined the Republican Party which was opposed to slavery and was elected to the Congress in 1859.
After the Civil War broke out, he worked closely with Lincoln administration officials on legislation to finance the war. He played a major part in the passage of the Legal Tender Act of 1862 and the National Banking Act in 1863 in order to help in obtaining funds for the war.
After the Civil War, Stevens served on the Joint Committee on Reconstruction. However, his Reconstruction efforts were resisted by President Andrew Johnson, prompting Stevens to introduce the resolution for President Johnson’s impeachment. He even chaired the committee responsible for drafting impeachment articles.
Stevens began drafting versions of what would become the Fourteenth Amendment in December 1865. Several black former slaves were freed by the 1863 Emancipation Proclamation and the Thirteenth Amendment (ratified in 1865)—the latter of which had formally abolished slavery. The Fourteenth Amendment was proposed to address citizenship rights and equal protection under the laws for these former slaves. It was ultimately adopted on July 9, 1868, as one of the Reconstruction Amendments. 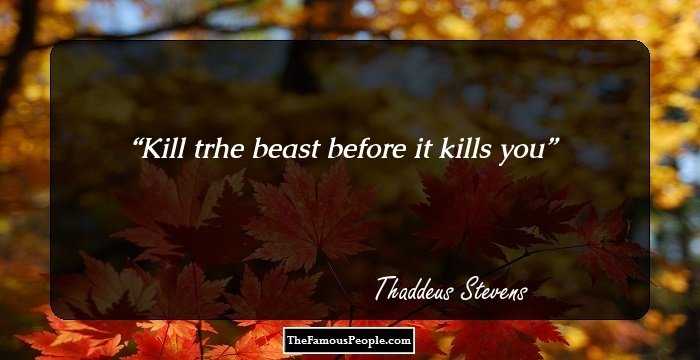 Quotes: You
Major Works
A radical politician who fought hard to abolish slavery and proposed equal rights for African-Americans, Thaddeus Stevens pushed Congress to pass a constitutional amendment abolishing slavery that resulted in the adoption of the Thirteenth Amendment to the U.S. Constitution which outlawed slavery. Furthering his efforts, he proceeded to play a major role in the adoption of the Fourteenth Amendment which addressed the issues of equal rights and citizenship for the former slaves.
Personal Life & Legacy
Thaddeus Stevens never married. It was rumored that he had a long-term relationship with his widowed housekeeper, Lydia Hamilton Smith, who was an African-American. He had adopted two of his nephews after the death of their parents.
He suffered from ill health during his later years but remained active on the political scenario despite his failing health. He died on August 11, 1868. Shortly before his death he had requested to be buried in Shreiner-Concord Cemetery in Lancaster, Pennsylvania, because the state accepted all races.
You May Like

See the events in life of Thaddeus Stevens in Chronological Order